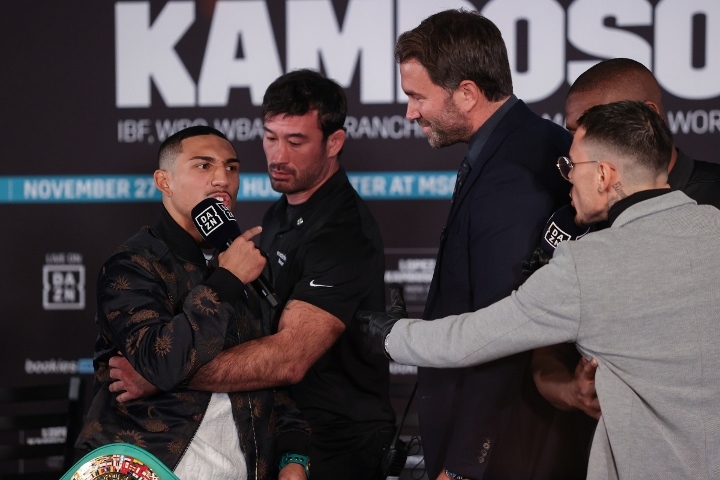 Lopez hopes he knocks out George Kambosos Jr. even more viciously than he demolished Mason Menard when they finally fight Saturday night. A 21-year-old Lopez, still a prospect at that point, drilled Menard with a picture-perfect right hand that sent an unconscious Menard crashing to the canvas, face first, just 40 seconds into their scheduled 10-round bout in December 2018.

Lopez (16-0, 12 KOs), who now owns four lightweight titles, expressed during a conference call Monday with a small group of reporters how he wants to obliterate the unbeaten Kambosos (19-0, 10 KOs) in similar fashion.

“I don’t think this fight will go past the first,” Lopez said. “I’ve been stopping my sparring partners to the head, to the body, to everything, and these are 16 ounces [gloves]. I’m not even going full throttle. So, it’s like I’ve been in the gym and I’ve been busting my ass. This guy, I don’t like him on top of that.

Lopez-Kambosos infamously has been postponed five times since it originally was scheduled for June 5 at the Miami Marlins’ loanDepot Park.

Eddie Hearn’s Matchroom Boxing took control of the promotion once Triller Fight Club defaulted early in October on its whopping winning bid of $6,018,000. Matchroom offered the second-highest amount for the right to promote Lopez-Kambosos, $3,506,000, at the IBF’s purse bid February 25.

Though he’ll make less money for boxing Kambosos because Triller Fight Club defaulted on its bid, Lopez hopes the sixth time is the charm Saturday night for this mandated defense of the IBF lightweight title he won when he stopped Ghana’s Richard Commey (30-3, 27 KOs) in the second round of their December 2019 fight at Madison Square Garden. Their 12-round, 135-pound championship match is the main event of a DAZN stream set to start at 8 p.m. ET.