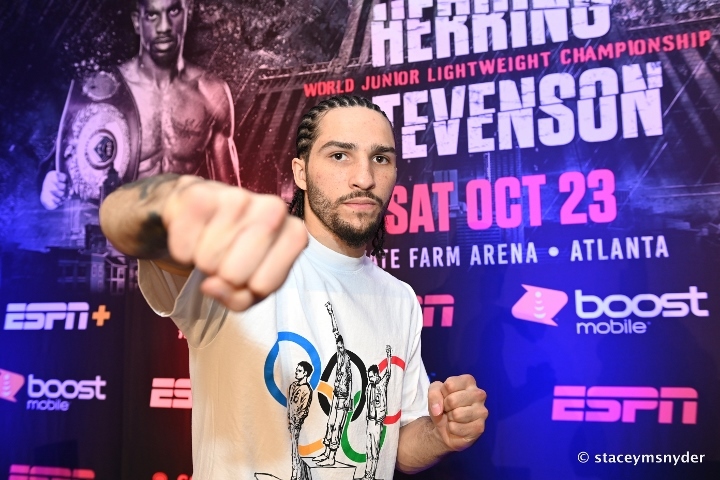 Barely a mile from where he’ll fight Saturday night, Muhammad Ali’s grandson visited the spot Thursday where one of the most fascinating figures in American history lit the Olympic torch to kick of the 1996 Summer Games in this city.

Nico Ali Walsh wasn’t born until nearly four years later, but he had watched that iconic moment many times before this visit. Five years after the legendary heavyweight’s death, he remains an inspiration to the grandson he encouraged to pursue boxing from the time Ali Walsh was a young boy.

Las Vegas’ Ali Walsh, 21, will fight for the second time as a pro on the Jamel Herring-Shakur Stevenson undercard. A senior at UNLV, Ali Walsh (1-0, 1 KO) will battle James Wesley II (1-0, 0 KOs), of Toledo, Ohio, in a four-round super middleweight match ESPN will air as part of a three-bout broadcast from State Farm Arena (10:30 p.m. EDT).

If nothing else, Ali Walsh is more confident than the night he made his pro debut two months ago. Viewers might not have known it from the way Ali Walsh tore through Jordan Weeks, but he didn’t know what to expect the first time he competed in an official fight without headgear, while wearing smaller gloves.

“The biggest thing I learned is that it’s possible – it’s possible,” Ali Walsh told BoxingScene.com following a press conference Thursday at the Omni Hotel Atlanta at CNN Center. “It’s been my dream to box. My grandfather pushed me to box. Everyone believed in me, but at some points I didn’t know if it was possible. And after the first fight, I know it’s possible, so all the pressure is gone.”

Ali Walsh scored one knockdown against Weeks (4-2, 2 KOs), hurt him again and needed just 1:49 to win by technical knockout in the opening round of a four-rounder August 14 at Hard Rock Hotel & Casino in Tulsa, Oklahoma.

It is unlikely Wesley will test Ali Walsh in his second professional bout, but Ali Walsh wants to apply what his trainer, Javan “Sugar Hill” Steward, has taught him in training since he stopped Weeks in the first round.

Ali Walsh, who expects to graduate with a business degree next spring, has done his schoolwork online since he arrived in Atlanta on Wednesday.