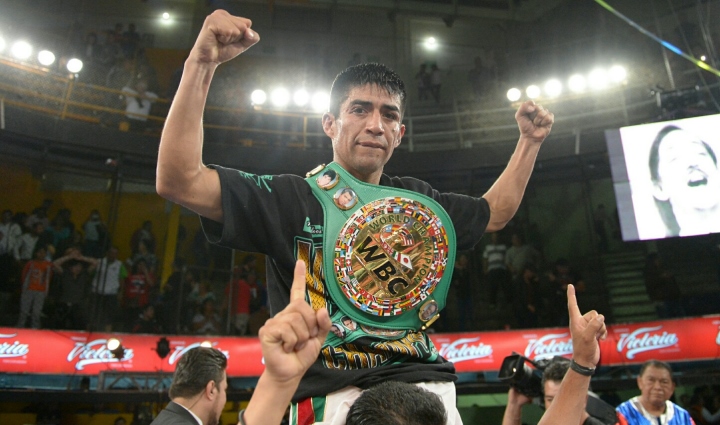 Ganigan Lopez pulled off an upset win in the most unexpected way.

Jose Soto saw his first career fight outside of Colombia end in disappointing and anti-climactic fashion, as he was disqualified for excessive headbutts in his junior bantamweight clash with Mexico City’s Lopez. Two separate headbutts left Lopez with cuts over both eyes, the latter enough to prompt an immediate stoppage at the end of round five and with the local fighter hailed as the winner by disqualification in the Boxeo Telemundo main event Friday evening at Deportivo Oceania in Mexico City.

Lopez hadn’t fought in nearly two years but was able to present a few tricks for the unbeaten 26-year-old Soto. The veteran southpaw—who turns 40 in November—enjoyed success with his right jab while Soto struggled to establish a rhythm in the opening round.

Soto took the lead in round two, beating Lopez to the punch and scoring with effective body shots. Lopez took the punches well, though at the expense of his own offense slowing down as Soto gained confidence with each sequence.

Momentum didn’t last long, as both boxers struggled to find the mark in round three. Soto was constantly short with his jab, while Lopez often overshot his jab and left hand before settling down and landing shots down the middle. Soto was visibly stunned by a straight left hand, though able to clinch his way out of trouble.

Soto landed a straight right hand midway through round four, only for the moment to be spoiled by the very next sequence. Lopez attempted to regain his footing, stopping in his tracks which led to a brutal clash of heads. Soto misjudged the distance, leading head-first and slamming his forehead over the left eye of Lopez.

Time was called to examine the wound, which continued to gush blood for the duration of the fight. Lopez didn’t let it affect his performance, coming on strong in round five while Soto struggled to track down the crafty veteran. The two met at close quarters late in the round, only for another clash of heads to take place. Lopez was left with a cut over his right eyebrow, while the original cut continued to be a problem.

The sequence was enough for the referee to decide that Soto was done for the night, collecting the judges’ scorecards to give the suggestion that the fight was heading to a technical decision.

Lopez was instead declared winner by technical decision, earning the upset victory. He improves to 37-11 (19KOs), ending a two-fight losing streak as he grabs his first win since outpointing countryman Saul ‘Baby’ Juarez on this very platform more than two years ago at Auditorio Blackberry in Mexico City.

Soto heads back to Colombia with his first career defeat, as his record falls to 15-1 (6KOs).