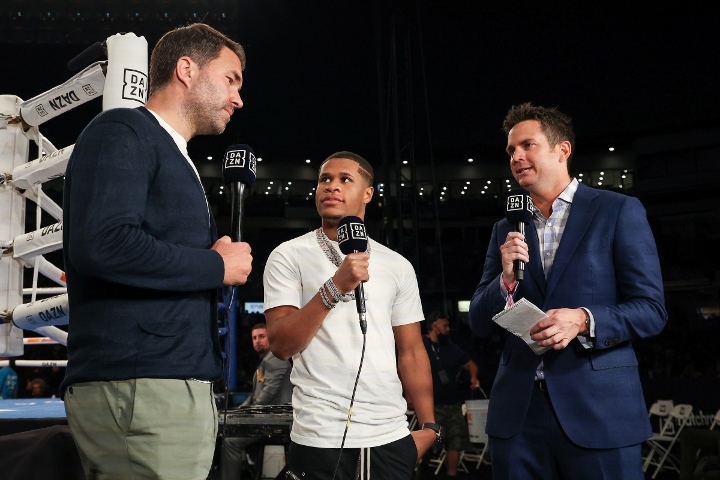 The fight between Devin Haney and Joseph Diaz Jr. is inching closer to becoming a reality.

Matchroom Boxing head Eddie Hearn has intimated that a lightweight scrap between the WBC champion Haney (26-0, 15 KOs) and interim WBC champion Diaz (32-1-1, 15 KOs) could take place on Dec. 4 in Las Vegas on DAZN in a still to be determined venue.

“I’m speaking to their representatives for JoJo Diaz,” Hearn told IFL on Friday. “We want to make the fight. We’re doing everything that we can. We need to get it done in the next few days. We’ve made a bigger offer now [than what he was supposed to get fighting Ryan Garcia]. I can’t see in a million years how he wouldn’t take the fight, but anything could happen.”

ESPN’s Mike Coppinger reported Friday that both fighters have agreed to terms for a fight to take place either Dec. 3 or Dec. 4 but contracts have not yet been signed.

Diaz responded to Coppinger’s report on social media with a quote tweet saying: “[Haney] wants a rematch clause in there that’s why it taking so long to get it done. [Face with rolling eyes emoji]. But we’ll give him the beating twice if he wants it. I’m making sure this fight happens for the fans. [Flexed biceps].”

The bout between Haney and Diaz is one of the most palatable matches that could be made in the 135-pound division.

The 28-year-old Diaz, a 2012 US Olympian from Los Angeles, is a former world champion at 130 pounds who made his lightweight debut in July with a unanimous decision win against Javier Fortuna.

Diaz won the 130-pound IBF title by besting Tevin Farmer in January 2020 but never defended the belt. He lost the crown on the scales after blowing weight in February while fighting mandatory challenger Shavkatdzhon Rakhimov. The fight ended in a majority draw. His only professional loss was to Gary Allen Russell Jr. via unanimous decision in 2018.

The 22-year-old Haney, from Las Vegas, was awarded the WBC crown in 2019 without winning an actual fight and has been facing backlash ever since for being an “email” champion.