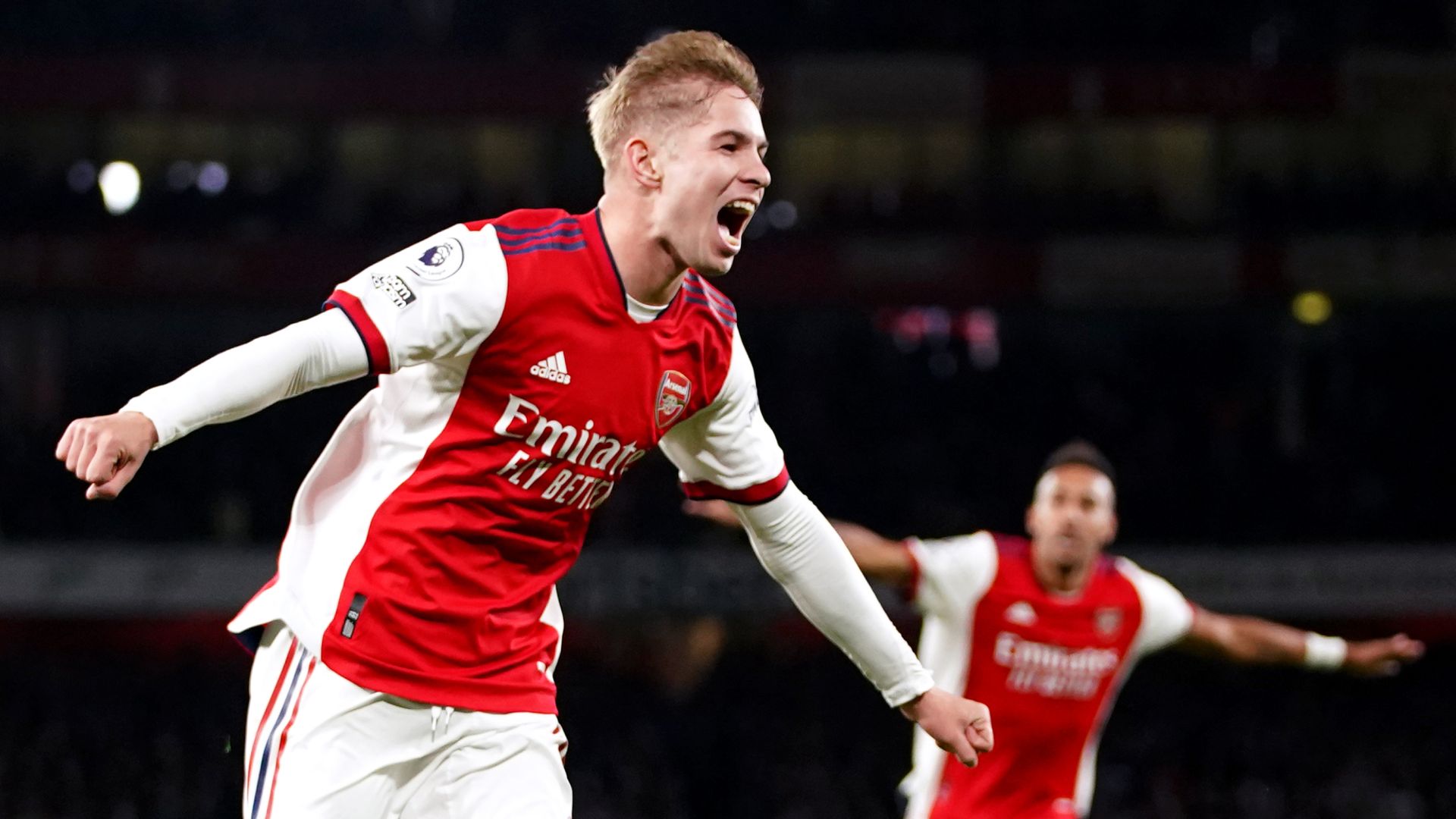 Arsenal’s Premier League revival gathered pace as Aston Villa were swept aside 3-1 at the Emirates on Friday Night Football.

Thomas Partey’s first goal for the Gunners (23) was added to in first-half stoppage time by Pierre Emerick Aubameyang (45+6) after his initial penalty was saved by Emi Martinez following a VAR review for a foul by Matt Targett on Alexandre Lacazette.

Emile Smith Rowe stretched the hosts’ advantage on the break (56) to cap another impressive display before Jacob Ramsey scored a late consolation for the visitors (82).

Arsenal are now unbeaten in seven games but after back-to-back draws with Brighton and Crystal Palace, this was the perfect return to winning ways with the victory moving them up to ninth ahead of the weekend’s remaining games.

The result means Aston Villa stay in 13th place after suffering a third successive league defeat for the first time since July 2020.

Mikel Arteta was hoping to achieve a first win of his managerial career against Aston Villa having lost all three of his previous encounters, and there was a gulf in class between the two teams in an opening half dominated by the hosts.

After just 22 seconds, Ollie Watkins was booked after finding himself embroiled in a spat with Gabriel Magalhaes, appearing to kick out at the Brazilian centre-back as he ran onto Matt Targett’s ball over the top.

It would set the tone for an opening period in which the visitors were rattled; Bukayo Saka, who was passed fit after being substituted against Crystal Palace, acrobatically fired wide from an acute angle before Aubameyang fired over from Nuno Tavares’ pass.

Dean Smith had his head in his hands as Villa’s sluggish start continued with Ezri Konsa fortunate to hear referee Craig Pawson’s whistle for a soft foul by Lacazette in the build-up to Aubameyang stroking the ball into the net.

Sky Sports’ Jamie Carragher said: “Aston Villa have started this game the way they finished the last one. Konsa’s lucky.”

Arsenal made three changes for the visit of Aston Villa as Alexandre Lacazette made his first Premier League start of the campaign. Lacazette came off the bench to score a last-gasp equaliser against Crystal Palace on Monday night and was rewarded with a recall.

Villa were unchanged from their loss to Wolves last weekend although Leon Bailey was back on the bench following a hamstring injury.

Arsenal came within inches of finding the breakthrough on 20 minutes. A foul by Tyrone Mings on Saka allowed the England midfielder the chance to delivery from out wide and after Partey had hooked the ball back across goal, Gabriel’s snapshot smacked the post.

But Arteta’s side didn’t have to wait much longer to establish a lead their vibrancy had merited.

Villa conceded three goals against Wolves from set pieces and their vulnerability from dead ball situations was exposed once more as Emile Smith Rowe’s corner was flicked home by Partey, getting in front of John McGinn to beat Emi Martinez despite him getting a touch to the header across goal.

It was Partey’s first goal for Arsenal, and his first of any kind since scoring for Atletico Madrid in July 2020.

Smith continued to express his concern on the touchline as another sweeping move led by the impressive Nuno Tavares led to Saka’s first-time shot back across goal being kept out by the legs of Martinez.

But Arsenal would deservedly double their lead six minutes into stoppage time at the end of the first half as Pawson was alerted by VAR Michael Oliver to inspect a challenge inside the box by Targett on Lacazette on his pitchside monitor, with enough evidence to suggest a clear and obvious error had been made.

Aubameyang’s spot-kick was initially saved by Martinez down to his right, by the Arsenal captain was alert to stab home the rebound.

Sky Sports’ Gary Neville said: “Dean Smith might be a little bit unhappy with the penalty, but his team have had an absolute mauling in the first half.”

Smith made a tactical change at the restart as Leon Bailey replaced Axel Tuanzebe as Villa reverted to four at the back, and there was more courage and appetite from the visitors in the opening five minutes after the break than in the entire first period.

Emi Buendia found space down the left and his cut-back found Danny Ings with his pull-back only for Ben White to make a crucial block from eight yards out.

But Arsenal caught them with a classic sucker punch to extend their lead and effectively end the contest on the counter.

Aubameyang flicked Tavares’ pass around the corner on the half-way line with a lovely ball to set Smith Rowe away down the left. Konsa was unable to match him stride for stride and Mings’ forlorn attempt only led to a cruel deflection to divert the midfielder’s shot beyond Mings via the post.

Villa belatedly created their first real opening on 62 minutes as Targett found the inside run of Buendia behind Arsenal’s defence but Aaron Ramsdale produced a fine stop with his feet to preserve the clean sheet.

Sky Sports’ Nick Wright said: “It’s a party atmosphere inside the Emirates. What a contrast to the Palace game. The hosts look rampant. Fourteen shots in the first half – the most they’ve had in a single half under Mikel Arteta – and already five more since the break.”

Martin Odegaard replaced Lacazette in the final third of the game as the Frenchman signalled some discomfort before being given a standing ovation for another energetic display.

Villa sought in vain for a consolation and Ramsey reduced the deficit with his first Premier League goal. Partey withdrew from a challenge with Bailey before Gabriel failed to get tight to the 20-year-old as the first-time strike from the edge of the box flew beyond to distraught Ramsdale.

There might well have been a really nervous ending for Arsenal as a Villa corner moments later was flicked goalwards on the near side by Mings with the ball flashing past the far post with Ramsdale again motionless.

But Arsenal would absorb Villa’s late rally to record an important win for Arteta after a previously winless October.

“This was a difficult decision as there’s been so many outstanding performances from Arsenal tonight but Emile Smith Rowe with his goal probably just tips it for him.

“I’ve been so impressed by him, and he also got the assist from the corner. He’s had a great combination with Nuno Tavares right throughout this game.

Arsenal host Leeds in the Carabao Cup fourth round on Tuesday before visiting Leicester in the Premier League next Saturday at 12.30pm.

Aston Villa host West Ham in the Premier League next Sunday, live on Sky Sports; kick-off is at 4.30pm.