Emiliano Martinez returns to Arsenal on Friday as statistically one of the best goalkeepers in the Premier League and determined to show his former club they made a mistake when letting him join Aston Villa last year.

It is just over 12 months since Martinez, 29, surprised many, including his own family, by opting to leave the club he had been at since the age of 17 and try something new in the Midlands.

The Argentine had just enjoyed his best and most productive season at the Emirates, playing 23 times after regular No 1 Bernd Leno was seriously injured at Brighton in June 2020 and starring as Mikel Arteta’s side upset Chelsea to win the FA Cup last August and so qualify for the Europa League.

Martinez was also in goal as Arsenal lifted the Community Shield later that month, only to then suddenly leave the club at the start of last season after not being given the right assurances over future playing time in north London while negotiating a new contract.

“I love everything about Arsenal. I still love them and I’m still watching the games, but I just felt like they didn’t trust me like they should have,” Martinez told Sky Sports when reflecting on that eyebrow-raising career change back in March.

And you can see why he felt that distrust. 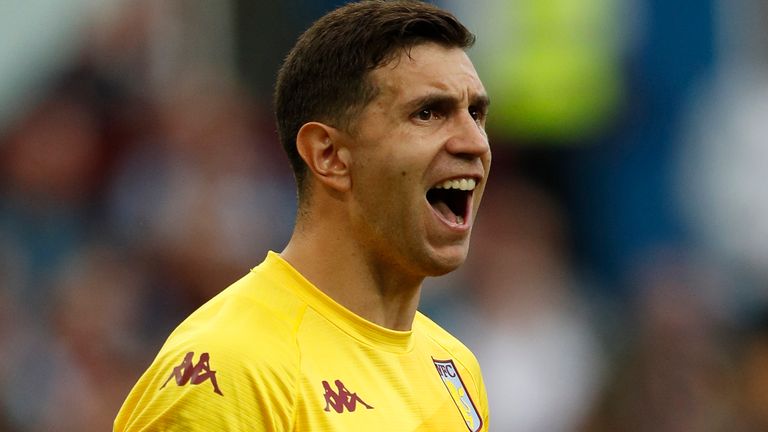 Emi Martinez has proved himself to be one of the best goalkeepers in the Premier League – take a look at some of his best saves.

Arsenal scouts first came across the Mar del Plata-born ‘keeper while playing for Argentina U17s, leading to a £1.1 million move from Independiente in 2010.

A decade on, though, and Martinez had made just 15 league appearances for the club – nine of which came only after Leno was sidelined last year – while also being shipped out on loan to the likes of Oxford United, Sheffield Wednesday, Rotherham United, Wolverhampton Wanderers, Getafe and Reading.

And all the while, Arsenal kept on signing players in his position, with the writing very much on the wall as far as Martinez was concerned.

“They didn’t say to me that I wasn’t going to play, they just didn’t guarantee me the games that I wanted to play.

“It was a gamble, but I always believe that if you stay in the comfort zone, you will never reach anything in life. I decided to take the step up.”

“So, after 10 years, I decided to leave, and it was very difficult. My family didn’t understand why I was leaving when I was at such a good level at Arsenal, but it was my decision to leave and I’m really proud I did it.

“It was a gamble, but I always believe that if you stay in the comfort zone, you will never reach anything in life. I decided to take the step up.”

Arsenal’s loss, though, has very much been Villa’s gain, while for the single-minded Martinez, the gamble has also paid off handsomely with a long-awaited Argentina debut in June.

In fact, things began brilliantly for the player following his £17m move to Villa Park, with Martinez making a crucial penalty save on his debut to help Villa beat Sheffield United 1-0 at home last September.

Just getting the nod to start that game from Villa manager Dean Smith was all Martinez needed to realise he had made the right decision to end his career at Arsenal.

“The way they welcomed me, the gaffer trusted me from the very first day playing me against Sheffield United,” he said.

“He could have said you need time to settle and then play later on in the season. But he played me in the first game of the season, and he trusted me. And when somebody trusts me that much, I have to repay them with good performances.

“That’s what this club deserves. The best of Emi Martinez.”

And that is exactly what Villa have got, with Martinez recording 15 clean sheets in his debut campaign in the Midlands, equalling Brad Friedel’s club record for Premier League shutouts in the process.

Meanwhile, only Man City’s Ederson and Chelsea’s Edouard Mendy have kept more clean sheets since the latter’s top-flight debut at the start of last October, eye-catching form that at one stage last season even threatened to propel Villa into Europe.

Not only that, but having earned his first international call-up aged 18, Argentina also then recognised Martinez’s worth by finally handing him his debut in June. This was another decision the ‘keeper went on to justify with a string of brilliant displays to help Argentina win a first Copa America title since 1993.

Martinez started every game bar one in Brazil last summer, conceding just twice along the way, while it was his heroics in their shoot-out win over Colombia when he saved three spot-kicks that sent his country into the final, where they beat their archrivals and hosts 1-0.

“It was difficult at times. But we have Emi and he’s phenomenal. We knew that he was going to stop them. We trusted him.

And according to Lionel Messi, Martinez played a pivotal role in that triumph, the Argentina captain’s first international title with his country.

“It was difficult at times,” said Messi after Argentina’s semi-final win over Colombia. “But we have Emi and he’s phenomenal. We knew that he was going to stop them. We trusted him. He deserves it.”

Drama with penalties is actually starting to become a regular theme now with Martinez after the shot stopper’s recent antics at Old Trafford.

On that occasion, he managed to psyche out Bruno Fernandes by gesticulating for Cristiano Ronaldo to instead take a last-minute spot-kick, resulting in the former blasting his effort over the bar as Villa beat Man Utd 1-0.

FREE TO WATCH: Highlights from Aston Villa’s win against Manchester United in the Premier League.

Meanwhile, Martinez was at it again earlier this month when he managed to get inside Yoshimar Yotun’s head, putting the Peru player off as he also failed with a penalty in Argentina’s 1-0 World Cup qualifying win.

What Martinez’s spot-kick heroics show, though, are his strength of mind and sheer belief in himself, traits that not only have characterised his career so far, but are also vital in the topsy-turvy life of a goalkeeper.

Just before the kicks were taken last summer, Martinez is reported to have told Colombia’s penalty takers: “You look nervous, you are laughing, but you are nervous,” before adding: “I’m going to eat you.”

And when being told by then Arsenal manager Arsene Wenger after first arriving in the country that he needed to speak English in order to communicate with his team-mates, he did so within a year.

“I did not know the language,” he told El Pais. “And Wenger told me that the goalkeeper had to speak in English. When something gets into my head, I do it. In a year I learned to speak English and I even got my driver’s license.”

It is not just a determination and strong mind that have helped make Martinez one of the top flight’s most impressive ‘keepers, but his ball-playing capabilities as well.

The Argentine is one of the Premier League’s more confident goalkeepers with the ball at his feet, while his distribution is also excellent, especially his long-range passing to start off counterattacks (see graphic).

All of which makes Arsenal’s decision not to back Martinez last year even more puzzling, especially given the way Arteta’s teams like to build from the back and the recent purchase of Aaron Ramsdale as the club’s new No 1 in place of Leno.

And you can bet Martinez would love nothing better than to make his former employers regret that decision even more by keeping yet another clean sheet – as he also did on his first return to Arsenal as Villa won 3-0 last season – at the Emirates on Friday Night Football.