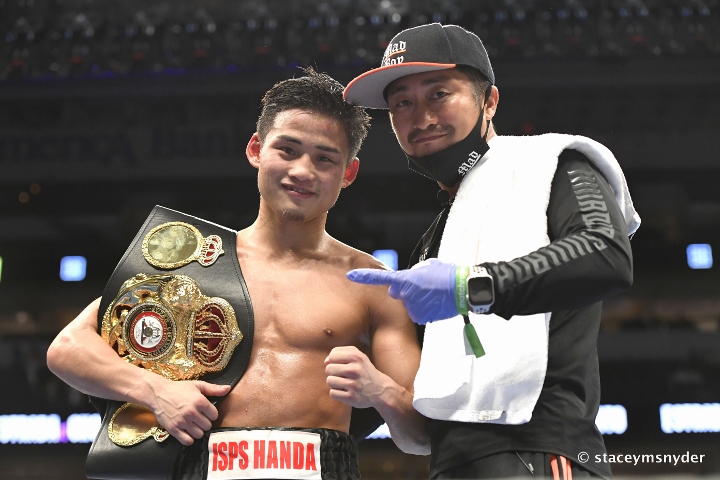 Hiroto Kyoguchi and Esteban Bermudez still have work to do and now with a firm deadline to help speed up the process.

A title consolidation bout between the pair of junior flyweights was re-ordered by the World Boxing Association (WBA) on Thursday. The instance marks the third time that the two sides have been called to make a deal, this time with a final ten-day deadline in place before heading to a purse bid hearing.

“The World Boxing Association (WBA) continues to move forward in its plan to reduce world titles and in that sense, sent a communication to the teams of [Kyoguchi and Bermudez], granting them 10 days to reach an agreement to fight,” Carlos Chavez, chairman of the WBA Championship Committee noted to both boxers in an official letter, a copy of which has been obtained by BoxingScene.com. “Kyoguchi and Bermudez were called to negotiate last June 10, 2021. That period ended on July 11, 2021. On August 18, a special 10-day deadline was given, which was communicated to the parties through the regular channels, which expired last August 28.

“Now they have been granted a final term of 10 days to close the fight. The period will expire on November 1. If there is no agreement or if any of the parties express unwillingness to agree on the fight, [a purse bid] will be called.”

Kyoguchi is represented by Eddie Hearn’s Matchroom Boxing, while Bermudez is signed with Greg Cohen Promotions. Both parties were warned back in June that neither boxer was permitted to enter another fight without first resolving terms in the ordered title consolidation clash.

Matchroom attempted to place Bermudez on its most recent show, in a scheduled October 16 title defense versus Jesse ‘Bam’ Rodriguez. The fight was announced as part of a show headlined by former four-division titlist Mikey Garcia, who went on to lose a ten-round, majority decision to Spain’s Sandor Martin. Bermudez was removed from the show after the WBA refused to sanction his fight with Rodriguez, who went on to face and eventually stop late replacement Jose Alejandro Burgos.

Instead, Bermudez will remain on the hook to face Kyoguchi, a former strawweight tltist who won a second divisional crown following a tenth-round stoppage of Hekkie Budler in their New Year’s Eve 2018 title fight in Macao, China. Three title defenses have followed for the 27-year-old Kyoguchi, including a fifth-round injury stoppage of Axel Aragon this past March 13 which served as his U.S. debut and first fight since signing with Matchroom Boxing and manager Eddy Reynoso.

The next fight for Kyoguchi will have to be a mandatory, which was due last September and which places him in violation of WBA rule C.13 addressing Bout Limitations, “within sixty (60) days of the expiration of the mandatory defense period, a World Champion may not fight a boxer who is not the Mandatory Contender, or the next highest ranked boxer (if there is no Mandatory Contender), nor may a designated contender fight during the same period for anything other than the championship.

“During the pendency of a required contract negotiation or purse bid period for a championship or eliminator fight, no champion, official contender, or boxer directly affected by the period can sign an agreement for, or participate in, a bout different than the one that is the subject of the negotiation or bid period.”

Bermudez entered the title picture following a sixth-round knockout of unbeaten Carlos Canizales in a stunning upset this past May 29. Canizales hadn’t fought in two years but was still expected to prevail and move forward in his own pursuit of Kyoguchi.

The honor went to Bermudez, though the near-five month wait has exhausted the patience of the WBA who remains committed to reducing its number of titlists.

In the event the ordered title fight heads to a purse bid, Kyoguchi is due 65% percent of the winning purse amount as the “Super” champion with the remaining 35% going to Bermudez as the “World” titlist.