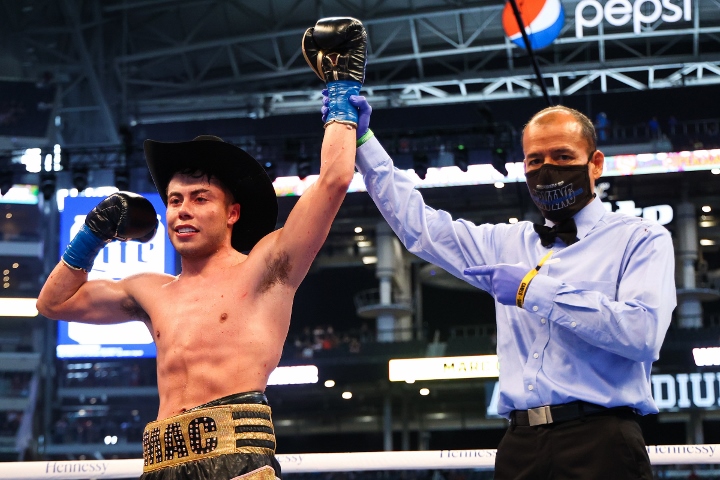 Marc Castro didn’t need much time to make the most of his hometown showcase.

A mismatch on paper played out that way in the ring, as Castro breezed through a first-round stoppage win over Angel Luna in a DAZN-televised affair on DAZN from Chukchansi Park in his Fresno hometown. The scheduled six-round junior lightweight contest saw Castro drop Luna barely two minutes into the fight, with the following up sequence prompting the stoppage at 2:41 of round one.

Castro has appeared on the undercard of pound-for-pound king Saul ‘Canelo’ Alvarez in each of his three pro bouts prior to Saturday night. It is grand a stage as anyone in the sport can ask, though the 22-year-old eagerly embraced the opportunity to bring the show to Fresno.

What was missing was an opponent who could test him or even provide even any sort of resistance. Luna—a Dominican journeyman based out of the Bronx—willingly stood directly in front of the heavy-handed Castro, who landed at will for as long as the fight lasted, which wasn’t very long.

Castro sent Luna to the canvas in the final minute of the round, with the end seemingly well in sight. Luna (14-8-1) beat the count but was unable to defend himself from the ensuing volley, leaving referee Jack Reiss no choice but to stop the contest.

Castro cruises to 4-0 (4KOs), having yet to go past four rounds which was the case in his previous outing this past May in Arlington, Texas. Saturday’s contest was scheduled for six rounds, though It will take a considerably better opponent to push the former amateur standout to that point.

The bout served as chief support to the return of former four-division titlist Mikey Garcia (40-1, 30KOs), Rodriguez’s stablemate who faces Spain’s Sandor Martin (38-2, 13KOs) in a scheduled 12-round welterweight contest.