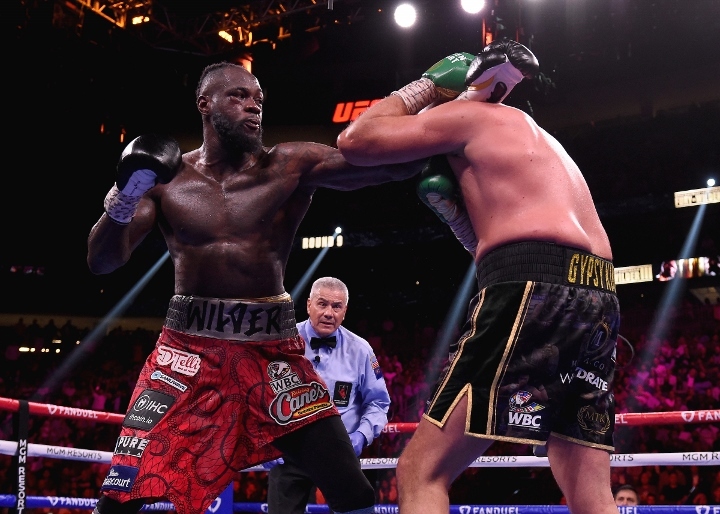 THE DATE OF October 9 2021 will be forever circled in history following the unforgettable third meeting of Tyson Fury and Deontay Wilder which, we would imagine, brought the pair’s fighting connection to a conclusion.

Thinking back, it now seems a bit odd that this was a fight that not many people particularly wanted to happen. Over here we all became fixated over the prospect of a potential Tyson-AJ blockbuster and probably disregarded just how exciting the first two fights were.

This one was even better and perhaps we should be thankful to Deontay for sticking to his guns and forcing the trilogy match through.

There are a few old timers – even older than me! – that don’t want to hear it and will always believe that nothing can surpass their own golden era, but this fight belongs right up there with the great ones and both Tyson and Deontay fully deserve their place in the fistic history books.

I pay tribute to Deontay. For all his critics over him not possessing the boxing basics and relying on right-handers, what cannot be denied is that he is an absolute warrior and brave as they come. He is more dangerous than most heavyweights even when he looks out on his feet.

His only problem is he will never have the beating of Tyson.

It is just a pity that he refused to play his part in the mutual respect between the fighters at the end of battle.

Tyson just continues to confound. He is just a remarkable sportsman and person, the type who will always defy the odds. That he has only been active for something like two out the last seven years and can still deliver performances like this is just incredible.

His physical profile isn’t one of a finely tuned fighting machine, but that is what he is. He is ungainly, can look a bit awkward at times and he makes this work in his favour. Probably his biggest asset is his ability, in the heat of battle, to combine brains and brawn. He is as smart as they come and he thinks his way through fights.

It is for that reason you don’t get unduly alarmed when things don’t go his way and he is put to the canvas. You know he will be calculating his rise and riposte even during moments of crisis.

I keep getting asked what is next for Tyson and the honest answer is that the man himself will determine his next move when he is ready. He will do what he believes is right for him and won’t be told who he has to fight.

He has earned that right and we will be ready and waiting to deliver on his wishes.

The heavyweight scene is booming and now we have an undisputed No.1 of the division in Tyson, which is what we predicted to BT Sport when they joined forces. BT are also well served when it comes to future champions because here at Queensberry we have also navigated Joe Joyce to pole position with the WBO and Daniel Dubois to an ordered challenge for the WBA belt.

So as far as heavyweight boxing is concerned, BT will be at the forefront of the business and in the best position, bar none.

I MANAGED TO keep tabs on events back in Blighty over in Las Vegas and I was delighted by the quality of boxing on display at our show in Birmingham.

The main event saw Brad Foster dropping a close decision to Jason Cunningham. It was a close fight and potentially one that can be run back down the line.

No-one can criticize what Brad has accomplished in the sport in such a short space of time, but this time he came up against a canny operator in Jason.

This is a small setback for the 23-year-old Foster, who has numerous title fights still in front of him and I believe he will come back stronger and wiser. Jason collecting multiple title belts at this stage of his career is a fantastic story and goes to show that you shouldn’t write people off, particularly those with significant experience and knowhow.

The standout performance of the night, for me, came from Ekow Essuman, who showed that he is going to be a real player in the welterweight division.

It was a classy and spiteful performance against a brave Danny Ball and our British champion emphatically showed he is more than ready to jump up the levels.