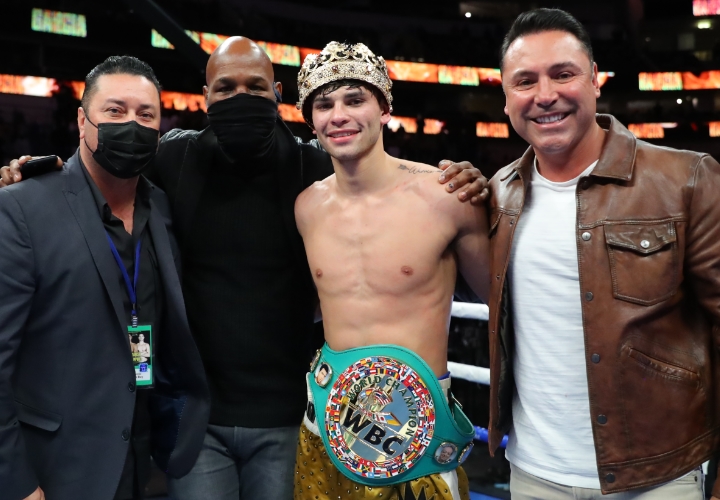 The head of Golden Boy Promotions was asked recently on social media on who he thinks would win in a matchup between his ace client Ryan Garcia and the current unified lightweight champion Teofimo Lopez.

His response is bound to raise some eyebrows.

“Ryan or Teofimo?,” De La Hoya said during an Instagram Live session. “Oh f—…Ryan or Tefimo..If the fight was done today, I’d have to go with Teofimo.

“I say that because, you know why? Teofimo has more experience, he fought [Vasiliy] Lomachenko which took him to another level.”

Indeed, Lopez (16-0, 12 KOs) beat Lomachenko by unanimous decision last October to collect the WBO, WBA, and IBF lightweight titles, making him, in the eyes of many, one of the top talents in the sport. Lopez was set to defend his belts on Oct. 16 at the Barclays Center against mandatory challenger George Kambosos, but the much-delayed event appears to be in jeopardy of not happening after the promoter Triller let it be known this past weekend that they were no longer interested in promoting it.

However inexperienced he may be compared to Lopez, Garcia (21-0, 18 KOs) saw his credentials bolstered earlier this year when he defeated Luke Campbell on a seventh-round stoppage at the American Airlines Center in Dallas, Texas. Garcia is reportedly in talks to face fellow Golden Boy stablemate Joseph Diaz this fall.

Still, regarding the hypothetical matchup with Lopez, De La Hoya thinks if the fight occurs a year or so down the line Garcia has as good a chance as ever of making things more interesting.

“But if Ryan fought him a year from now and gets experience, Ryan has the skill and the talent to beat him,” De La Hoya said.

If nothing else, it is clear that De La Hoya believes the fight, when and if it happens, only stands to be a net positive for the sport.

“Both guys can create a trilogy and f—— incredible, freaking amazing fights for us in boxing,” he said.