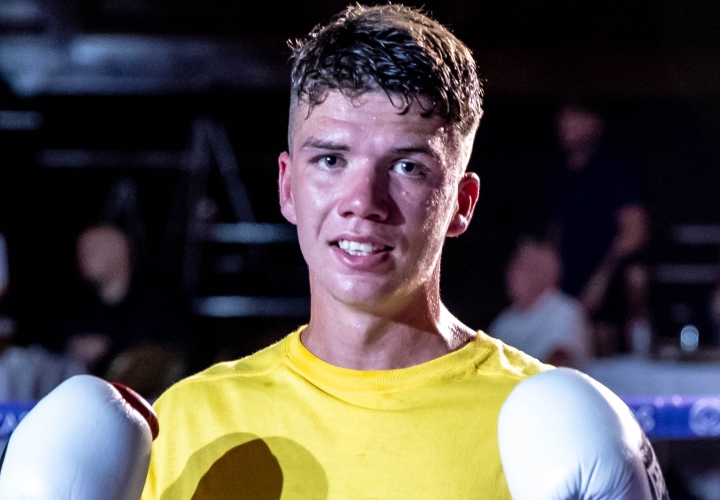 James Beech Jnr will have a point to prove when he revisits the scene of arguably his greatest performance as a pro boxer.

He features when it’s show-time in the Stadium Suite at Walsall FC’s the Banks’s Stadium, on the Sunday afternoon of September 26.

It was on the same grounds where the 24-year-old, from nearby Bloxwich, became a two-weight Midlands champion in 2019, after seeing off Luke Jones on points in a thriller.

Beech had previously defeated Louis Fielding by KO in 2018, meaning he has lifted area belts at both super featherweight and featherweight.

He was granted an opportunity at the British title during the pandemic, where he was outpointed unanimously by Brad Foster after another compelling encounter.

The same result was recorded against Chris Bourke in July at the Wembley Arena, with the WBC International super bantamweight bauble on the line.

Beech was left disappointed by his display that time, after coming up short widely against unbeaten left-hander Bourke, with the BT Sport cameras rolling live.

But he’s determined to make amends by improving on the 12 wins amassed before his unbeaten record was conceded, when the setbacks versus Foster and Bourne came along.

Beech is a four-year pro after a solid amateur grounding representing Pleck Boxing Club, who he fought for on 80 occasions with 50 victories to show for it.

The second-generation fighter is the son of Jimmy Beech, who featured on 31 occasions as a pro between 2003 and 2008.

Beech Jnr said: “I would definitely put it up there with my best memories as a pro (beating Jones for the second Midlands title). It was such a class night.

“With all of the fans being back, I can’t wait to box in Walsall again. I took 100 with me down to London, for my last fight, but this will be different.

“I’ll be honest, I was rubbish that night. I know I performed badly and that I can do much better than that. I just felt flat, I could even feel it on the pads when I was getting ready.

“I can make excuses, like that I’d been out of the ring for over a year and my camp was too long, because the date got pushed back.

“I would rather just tell you that the better man won. I’ve struggled with southpaws before and he just kept me on the end of a jab.

“I found it tougher than the (Brad) Foster fight, to tell you the truth, and I got a lot of respect for how well I did there. I’d love to get another chance at that British title.

“My phone didn’t ring too much for opponents, after that, but maybe someone will think I’m a bit more beatable now. That might do me a favour, you never know.

“All I can do is move on and get it right next time, by knuckling down and working hard until something like a shot at the English, maybe even a Midlands title again, comes along.

“It was always my intention to be back out quickly, whether I won or lost. I just want to stay active and get some wins again. The past is behind me now.”

Four other fights feature on the show, which is sponsored by Principle Partners Alliance Scaffolding, Jobsworth Recruitment and GPW Consulting.

Birmingham’s boxing fan with a license, the ever popular Kane Baker, is action.