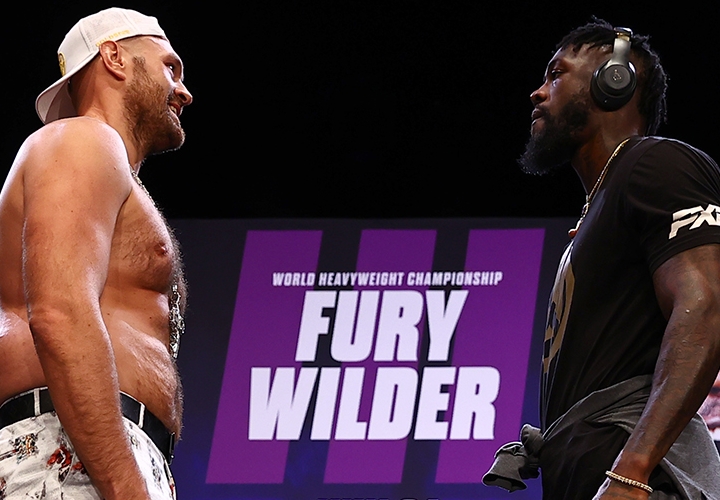 WBC heavyweight champion Tyson Fury has denied allegations that he was trying to avoid a trilogy fight with Deontay Wilder.

Back in February 2020, Fury stopped Wilder in seven rounds to capture the WBC crown.

After that fight, Wilder exercised an immediate rematch clause.

Because of the COVID-19 pandemic, the third encounter was pushed back several times.

Eventually, Fury and his handlers were claiming that Wilder’s rematch clause had expired.

The two sides were close to finalizing a deal for an August date in Saudi Arabia.

However, Wilder began a legal action to enforce his right to a rematch – and he was successful, with an arbitrator ordering Fury to honor the rematch clause.

Fury and Wilder will now collide for a third time on October 9th at the T-Mobile Arena in Las Vegas.

“A lot of people don’t know this but I’m not optimistic that the Joshua fight will ever happen. He talks a good game but is he really a boxing man? I’m not really too sure,” Fury told Gary Neville’s The Overlap.

“All the talk was that me and Joshua were going to fight, no contracts were signed but then, all of a sudden, Deontay Wilder has put on an arbitration against me with a top judge and all the best lawyers in North America. I can’t do anything about that. If you want to bring a court case against me in America, even if I haven’t done anything, I’ve got to defend it otherwise I’m guilty, that’s how it works. So I said, let’s do it.

“He wanted to go to court for the rematch, his contract had expired because of COVID, but to be honest with you, fair is fair, I’m an honest man and if the shoe was on the other foot, I’d want my fair fight because it wasn’t really my fault or Wilder’s fault why it happened, the world got turned on it’s head and it didn’t happen. So we’re on court and he won the case, the judge said fair is fair, give him the rematch, there’s not much I can do about that.”

Fury made it clear that his WBC belt had nothing to do with the rematch clause.

With or without the title, Fury is legally tied to a third encounter with Wilder.

Had he passed Wilder over, there would have been significant financial damages.

“It’s not the belt, it’s contracted to me, so it’s got nothing to do with the belt. Do you know how much the suing case was if I didn’t fight him? $80 million,” Fury said..

“I was never really optimistic about the Joshua fight because all of this was going on in the background and they knew all that, Eddie Hearn knew it, Joshua knew it, but then all of a sudden it’s my fault.”