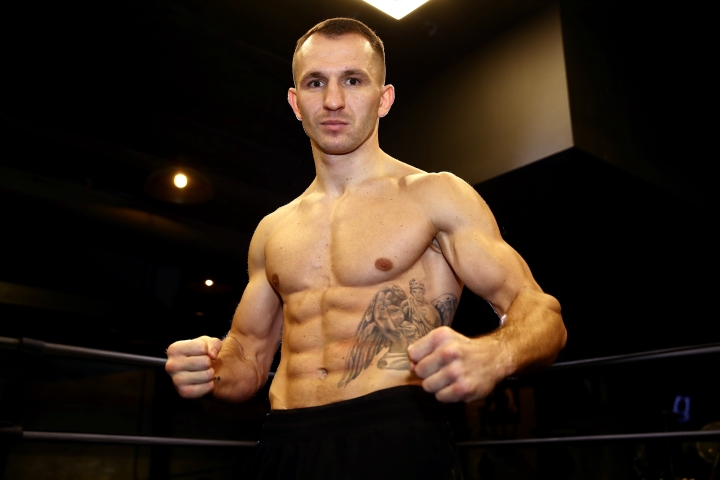 Egidijus “Mean Machine” Kavaliauskas is raring to lay down some leather on his next opponent, welterweight contender Vergil Ortiz.

As BoxingScene.com has previously reported, the two are scheduled to face each other on Aug. 14 at The Ford Center at The Star in Frisco, Texas. The fight will be showcased by DAZN.

Kavaliauskas sounded like a kid in the candy shop when asked recently about facing a fighter many consider to be one of the most lethal punchers in the 147-pound class.

“He’s a tough fighter, good fighter,” Kavaliauskas told FightHype.com. “I like his style. I think it’s gonna be a super good fight.

Kavaliauskas (22-1-1, 18 KOs), a decorated amateur who represented his homeland of Lithuania twice in the Olympics, last fought Mikael Zewski in September, knocking him out in the eighth round. His most notable moment as a professional, however, came in a loss, when he faced WBO welterweight titlist Terence Crawford at Madison Square Garden in New York on Dec. 14, 2019. Crawford stopped Kavaliauskas in the ninth round, although the Lithuanian managed to make it competitive in the early going, including landing a punch that dropped Crawford although it was not officially called a knockdown.

Ortiz (17-0, 17 KOs), a native of Grand Prairie, Texas, is regarded as an up and coming attraction, having stopped every single one of his opponents. He scored a hard-earned technical knockout over former junior welterweight titleholder – and fellow Texan – Maurice Hooker in the seventh round of their welterweight bout this past March at the Dickies Arena in Fort Worth. The fight with Kavaliauskas would represent Ortiz’s third bout as a headliner in his home state. (Ortiz lives and trains in California).

“We will see [if Ortiz has] experience and we will see about [his] intelligence in the ring, [his] pressure, punches, the power,” said Kavaliauskas. “He’s a good boxer, smart boxer, a fun fighter, so there’s going to be fireworks there…His last fight [against Hooker] he looked good, but he got hit a lot, I [could] tell. But for him it was an easy fight.”