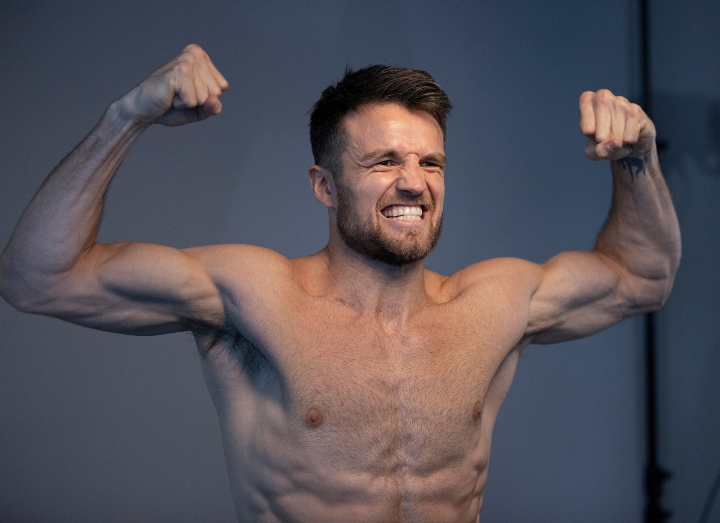 Fight Camp, Brentwood – Anthony Fowler was made to work hard for victory as he registered an eighth-round stoppage over late stand-in opponent Rico Mueller – setting up a tasty October 9 domestic clash with Liverpool rival Liam Smith.

The German, who arrived in the UK earlier this week to replace Roberto Garcia following an injury, had plenty of ambition at the start of the fight, but Fowler was always landing the heavy shots and the pressure finally told.

The Liverpudlian, who became a father during the week, has now won six fights in a row since suffering his one and only loss in the pros at the hands of Scott Fitzgerald at The M&S Bank Arena Liverpool back in March 2019.

“My next opponent is a really good fighter, much better than him, but I needed the rounds,” Fowler told DAZN afterwards. “I thought in round two I wobbled him but thought, ‘not today’. My last fight was three rounds and I thought, ‘I need rounds today’, so I stepped back and worked on a few things.

“The one thing I haven’t had in my career is rounds, I’ve always blasted my opponents out and haven’t really learnt much. I’m learning plenty in the gym but that’s where it counts, it means nothing in the gym.

“I’m from the south of Liverpool, Liam’s (Smith) from the north. It doesn’t bother me, I respect Liam a lot, he’s a really good fighter, ten times better than that lad tonight so I need to be on top of my game. I don’t turn fights down, since day one I’ve boxed anyone, I’ve asked for all these big fights, but it never happened for me.

“Even tonight, I wanted to box Roberto Garcia, a good, experienced veteran. Rico Mueller gave a good fight and I’m happy he replaced Garcia because I said in the ring, ‘thanks for giving it your all’, after six rounds he was six rounds down and he was still trying. Liam is a much higher level, but I needed the rounds and that’s what I got.”