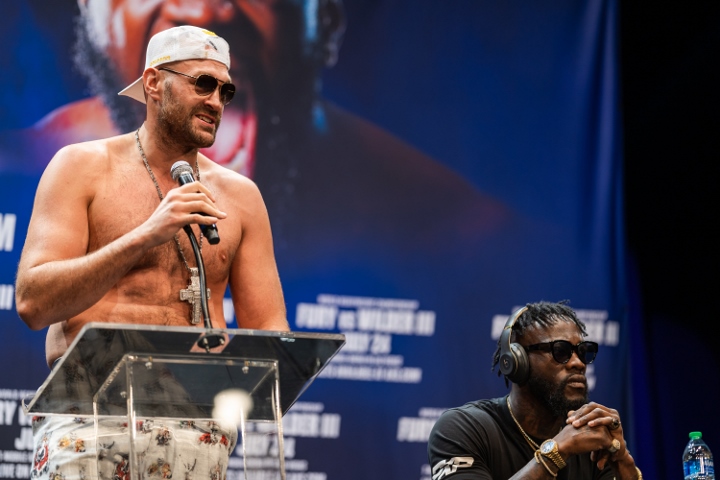 They were scheduled to fight for a third time on July 24 – with the event being pushed back after Fury contracted COVID-19.

Their bout has been rescheduled for October 9th at the T-Mobile Arena in Las Vegas.

Wilder and his camp members are not convinced that Fury actually had COVID.

They believe the unbeaten champion needed more time to get himself properly prepared for the fight – after rumors circulated that he was getting tagged up by sparring partners.

On Friday, Wilder made his feelings clear on social media.

“Yo bro, Malik Scott say it ain’t so… Not the COVID-19 lie… They’re going to hell for that one!!! Oct 9th can not come any faster,’ Wilder wrote, with a video of himself hitting the pads.

Fury was made aware of the comments – and hit right back.

“This man is a real piece of work. A real bully excuse maker. Not a warrior or a man at all. Beat the mug 2 times. I’ve battered him and his trainer. But still talking sh!t. Real p-ssy,” Fury stated.

They collided for the second time back in February 2020, with Fury stopping Wilder in the seventh round to capture the WBC title.

In the aftermath, Wilder made several allegations against Fury and his team – with the most serious being a claim that Fury had loaded his gloves with “egg weights.”

During a recent interview, Wilder repeated those claims.

“You think he ain’t gonna try to cheat this time?,” Wilder told 78SPORTSTV. “Oh they’re thinking, they’re coming up with a master plan.