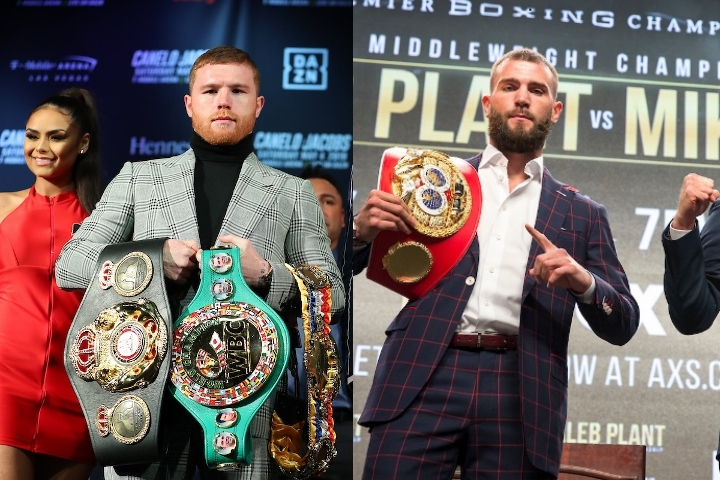 Eddie Hearn hasn’t given up entirely on the possibility of Canelo Alvarez and Caleb Plant fighting next.

Alvarez’s promoter suggested that after a couple days pass that stalled negotiations could resume for their full super middleweight title unification fight. Hearn also acknowledged during his weekly appearance Wednesday on “The DAZN Boxing Show” that he has discussed other options for Alvarez’s next fight, namely WBA light heavyweight champ Dmitry Bivol, with Alvarez and his head trainer/manager, Eddy Reynoso.

“From our side, I’ve been kept up to speed with the [Alvarez-Plant] situation with Eddy Reynoso and kind of left the lawyers to deal with that fight,” Hearn told co-hosts Barak Bess and Akin Reyes. “We know the undisputed fight is one that [Alvarez] wants to make. Obviously, it wasn’t able to get over the line for September the 18th. And now we’ve got to look at either the alternatives or, you know, to remain working on that fight. So, I don’t know whether the fight is dead. Perhaps there’s some more work to do on that, but certainly it now looks unlikely for September the 18th.”

Hearn addressed his role in the Alvarez-Plant negotiations as well. Reynoso has been Alvarez’s primary representative in those talks, but Hearn noted that Alvarez assured Hearn that Matchroom Boxing remains his promoter.

“No, I’m not out of it at all,” Hearn explained. “But, you know, our proposal was to do the fight on DAZN. You know, we had a proposal with the team to do the fight with PBC [on FOX Sports Pay-Per-View], which was, in principle, accepted by Saul. And, you know, I was happy for him to do that because I want him to take the undisputed fight. I’m not involved in, you know, I’m not the lead promoter of the show. I’m not involved in putting that fight together. What I am on is on the Canelo Alvarez team.”

Hearn added that the lead promoter of a bout between Mexico’s Alvarez (56-1-2, 38 KOs) and Las Vegas’ Plant (21-0, 12 KOs), if it were to happen, would be determined by Premier Boxing Champions, the company founded by Al Haymon.

“But the thing is Barak, I’m not gonna start,” Hearn said, “you know, throwing my toys out of the [playpen] and worrying about ego, about letting Canelo Alvarez take an undisputed fight. He told me I’m his guy. He told me I’m his promoter. I’m happy with that. I don’t think that anyone would be jumping through hoops from [the PBC] side for me to be involved. So, you know, I’m staying representing Canelo Alvarez. I don’t wanna get involved. I’m not making comments on Caleb Plant’s comments [about Alvarez’s demands].

“You know, that was the beauty of being a network free agent was that, you know, was the ability to do that. And we couldn’t get that fight on DAZN. So, we moved forward with that direction. Unfortunately, that hasn’t materialized for September 18th. We’ll see what happens. I spoke to Saul [Tuesday] night. I spoke to Eddy Reynoso last night. We talked about some other opponents. Of course, I’m still sure that there’s some options to pursue in terms of seeing if the Plant fight is possible, perhaps on another date. But, you know, that’s where we’re at right now.”