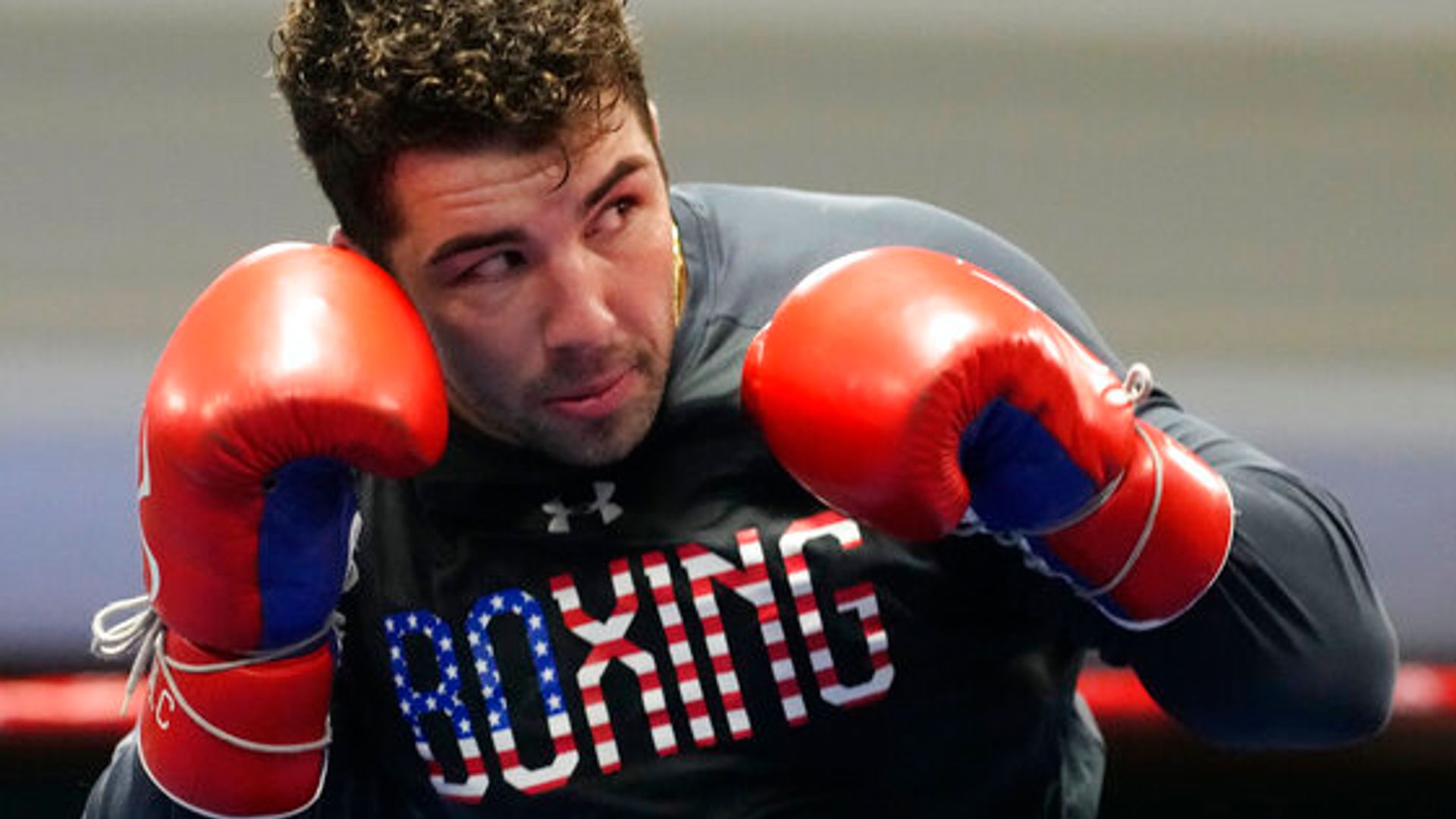 It was the nadir of American heavyweight boxing. It was the endpoint that had been feared for a generation. Five years on, it is still a source of head-scratching and bemusement.

At the 2016 Olympics, the United States did not name a single boxer in the light-heavyweight, heavyweight or super-heavyweight divisions. A lineage that included Muhammad Ali was not just downtrodden, it was worse than that. It was totally forgotten.

To resurrect an Olympic powerhouse in a marquee event is the task posed for Richard Torrez. No pressure, then. He is an impossibly cool, purpose-built athlete who would not look out of place in a US teen drama – “it’s just another day in the ring for me,” he smiles.

The sobering crash of the US heavyweight scene at Rio 2016 had been foreseen but not prevented.

Andre Ward won gold in 2004 as a light-heavyweight but the best big men that the US could muster were Devin Vargas and Jason Estrada. That number shrunk to just one in 2008 – Deontay Wilder, who won bronze.

By 2012, Dominic Breazeale, Michael Hunter and Marcus Browne all crashed out in the first round leading to the complete absence of any American heavyweights four years later for the first time in nine Games.

Audley Harrison, Great Britain’s super-heavyweight gold medallist in 2000 who paved the way for Anthony Joshua and co, insisted that potential American boxers were having their heads turned by other lucrative careers.

“They just use the talent in other sports,” Harrison said at the time. “If you are the parents of one of those talented kids, they can’t get a scholarship in boxing. You can in basketball, American football, soccer and more, so what are you going to tell them?

“Why are you going to go through boxing when you don’t earn anything?”

Perhaps it was always going to require a super-heavyweight who has boxing coursing through his blood to provoke an upturn in fortunes. He is not a believer in fate but says: “If there is destiny, then this is mine.”

Torrez acknowledges that potential boxers instead chose to become NFL or NBA players but he tells Sky Sports from Tokyo: “I feel like boxing is its own niche. If a guy wants to go into football? That’s great. But you will always have that one guy who wants to fight.

“You will always have that one guy who wants to bite down on his mouthpiece and punch.

“So it’s not a major issue. Yes, it might take some of the guys out. But the great ones know what they want to do with their life – they want to be a boxer.”

Defiantly, he states: “Whether it was to American football or to basketball, I’m not sure where the big guys went. But they are coming back in a great way.

“We have had great heavyweights and I consider myself the best.

“We will shock the nation in the next couple of years.

“The big guys are here to stay.”

Torrez is 21 years old. He graduated as High School Valedictorian (an honour given to the highest-ranked academic achiever), he was a member of his school’s robotics and chess clubs, and he enjoys magic tricks.

He might not be an American heavyweight in the mould of Mike Tyson but he has genuine pedigree in a sport that he was being primed to dominate before his birth.

“My grandpa wanted this to happen, my dad wanted it to happen,” he says. “It’s something I’ve been building towards for my entire life.

“My grandpa started boxing when he was a kid. His uncle came home from the Air Force and gave my grandpa some gloves. Grandpa went around town trying to box everybody!

“Then people started coming to him and he started a gym in his shed.

“My dad got into boxing because he was told by my grandpa: ‘If you come, you’ll get a McDonald’s afterwards!’

“He stuck with it and became fourth and fifth in the world in two weight divisions in the amateurs. He is the person I look up to the most.

“I have not lost in the US in the past eight years. I have been on the elite national team for the past four years.

Torrez is from a small farming town California’s San Joaquin Valley. He has won 10 national championships, a Golden Gloves title and Pan-American Games bronze. His amateur record heading into the Olympics is an eye-opening 151 wins and 10 defeats.

Notably he has beaten Jared Anderson, currently a professional touted as one of the world’s most dangerous emerging prospects.

Last year when Torrez’s Tokyo 2020 dream was curtailed he heard from Andre Ward, the 2004 gold medallist who retired as an undefeated pro as the best boxer on the planet.

“He told us to either take the time during the pandemic to sulk or get better,” Torrez says.

Despite the dearth of young talent emerging that Torrez aims to revitalise, the pro heavyweight scene has boomed since 2016 with Americans Deontay Wilder and Andy Ruiz Jr at the heart of the madness.

“I keep an eye on it,” says Torrez. “The Olympics are my dream and my goal. I would run around the playground pretending to be the Olympic champion, not the WBC champion.

“I do plan on going pro to make the very best of what I’ve got.”

These Olympic Games will allow professional boxers to enter, a divisive issue among the athletes themselves.

“It doesn’t sit well with me,” Frazer Clarke, Team GB’s super-heavyweight, dismissively told Sky Sports. “I don’t know what this will mean for the next Olympics.”

“If that means there will be pros at the Olympic, more power to them.

“I want to say that I won the Olympics, not just the amateur Olympics.

“I’m all for them fighting because I want to fight the best.”

Uzbekistan’s Bakhodir Jalolov has taken advantage of this rule to win eight pro fights by knockout and now return as a serious threat to the Olympic gold medal.

But teetering between amateur and pro boxing has not worked for Australia’s Justis Huni, who has won five pro fights inside the past year but sustained a hand injury in his most recent outing that has ruled him out of the Olympics.

“It’s always a gamble, especially in the heavyweight division where one punch can change anything,” shrugs Torrez who was never tempted by an early switch to the pro game.

“We hit hard, we get hit hard, and injuries happen more in the super-heavyweight division than in any other.

“You have to weigh up risk and reward.

“Some people need the money, some want to sit down on their punches more than they do in the amateurs.”

Amateur boxing can be a small community but Torrez has not yet shared a ring with Frazer Clarke, his Team GB counterpart.

“He’s a great guy, I have been to lots of camps with him, we have had a lot of really great sparring sessions,” says the American.

“He’s as good a guy as he is a boxer. He has exceptional skill and he’s a big guy.

“He will be really good competition if we meet up.

“I do study him, I watch film of him, when we spar I watch the video back.

“I have learned over the years, being in the elite international pool, to sit down with coaches to study opponents.

“I never used to because, when I watched people, they fought differently to when they fight me.

“I look for critiques in their boxing. I come up with game plans and solutions.”

Success in Tokyo for Torrez would be hugely consequential; not since Tyrell Biggs in 1984 have the USA won a super-heavyweight gold medal.

A young man with gold around his neck who can walk the walk, and talk the talk, like Torrez would become a valuable commodity overnight. But this journey is no quick fix, it has been in his bloodline since his grandpa was given a pair of crusty old gloves.

“You don’t have to be born a boxer to be a great,” he says. “I was lucky that my dad and grandpa were boxers so it was a generational thing.

“My life was set.

“That gives me an edge.”