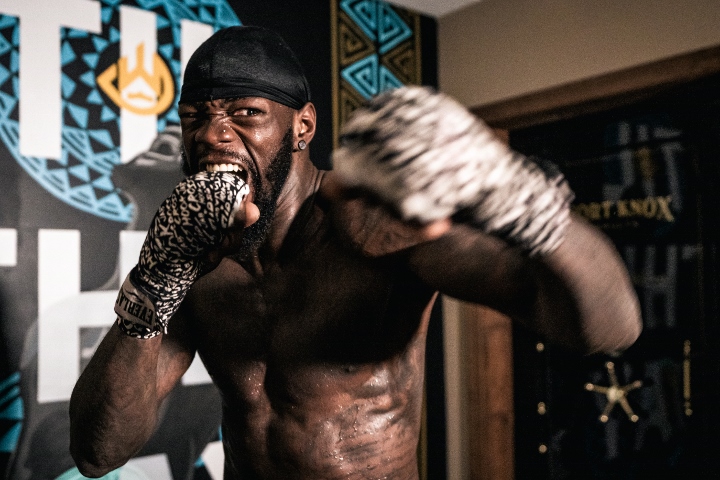 IBF, IBO, WBA, WBO heavyweight champion Anthony Joshua has double-downed on his belief that Deontay Wilder is not an elite fighter in the weight class. (photo by Ryan Hafey)

Wilder captured the WBC heavyweight title in 2015 and finished nearly all of his fights inside the distance – and then suffered his first blemish when he fought to a split draw with Tyson Fury in December 2018.

In February 2020, Wilder was stopped in seven rounds in his rematch with Fury.

Joshua believes Wilder became too reliant on his big right hand and never progressed to be more of a complete boxer.

“He isn’t an elite-level fighter, in my opinion,” Joshua told Sky Sports News.

“He’s good. It’s the heavyweights, so they always know one punch can change the course of a fight. But I’ve never, ever seen in the heavyweight division a fighter going to war with just one weapon, which is what they say is his right hand.

“When you get to the top level? Trust me, that don’t last anymore. That don’t work. As we’ve seen now with certain fights of elite-level fighters, he struggles at the top level, and there’s a lot more of us waiting for that opportunity as well to kick his ass.”

Wilder will attempt to reclaim his title on July 24, when he faces Fury in a trilogy bout at T-Mobile Arena in Las Vegas.

And Joshua is getting himself ready to make a mandatory defense against undefeated challenger Oleksandr Usyk, at Tottenham Hotspur Stadium with a tentative date of September 25.

The winners of the two respective bouts will be in line to fight each other in a full division unification.