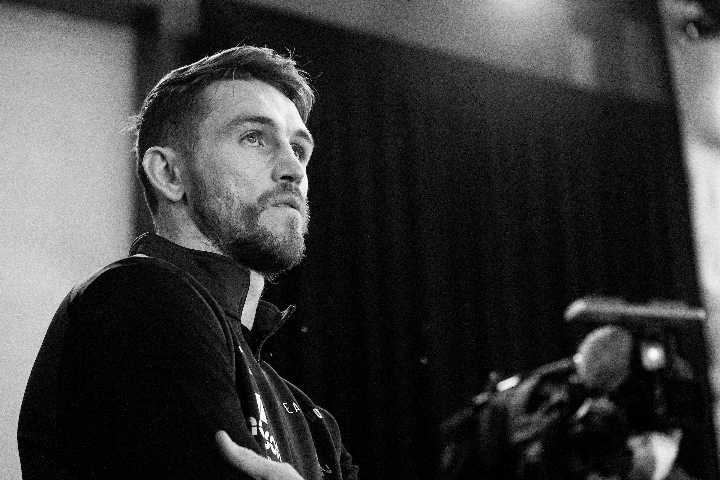 Callum Smith will return to the ring at a new weight class.

The former WBA Super, WBC Diamond and Ring Magazine super middleweight champion is set to lace up the gloves again in the second half of the calendar year.

Smith, in his last outing, went the distance with pound-for-pound superstar Saul Alvarez, losing a unanimous decision and in the process succumbing his global honors in what was also a challenge for the vacant WBC crown.

But the Liverpudlian (27-1, 19 KOs) looks like he will move up to light-heavyweight when he steps back through the ropes.

‘Mundo’ will have his comeback screened exclusively on DAZN worldwide after his promoter, Eddie Hearn of Matchroom Sport, revealed that the company’s deal with Sky Sports, a long-time partner, would cease with immediate effect.

“After more than 25 years of boxing with Sky Sports, we have made the monumental decision to sign a new, historic, landmark five-year boxing deal with sports streaming giant DAZN in the UK,” Hearn stated earlier this month.

As part of the previous agreement, Hearn’s UK shows were being streamed on DAZN in territories excluding the UK and Ireland.

Shortly after the announcement, Smith posted an image to his social media profile with the caption ‘175’, suggesting the move up to the light-heavyweight limit was forthcoming.

His management company, STN Sports, has stated that fight news for Smith is coming soon and further details will be revealed in due course.

Elsewhere, Callum Smith’s brother Stephen has announced that he is hanging up his gloves on the anniversary of his professional debut.

‘Swifty’, 35, made his bow in the paid code on June 21, 2008, and made the news public of his decision 13 years after knocking out Shaun Walton in the third of four rounds at the National Indoor Arena in Birmingham.

Smith represented Rotunda ABC as an amateur and achieved fame at the 2006 Commonwealth Games in Melbourne when he defeated Mehrullah Lassi in the final to win a gold medal.

He went on to win British, Commonwealth and fringe WBO and WBC baubles before stepping up to challenge for world honors in the super-featherweight division twice.

Smith lost by a technical decision to Francisco Vargas in what was his last defeat after an accidental headbutt left him with his left ear almost detached at Mandalay Bay in Paradise, Nevada, back in 2017, but finished his career with a string of three victories, with the most recent coming against Jonny Phillips on the undercard of aforementioned younger brother Callum’s win against John Ryder at the M&S Bank Arena in Liverpool.