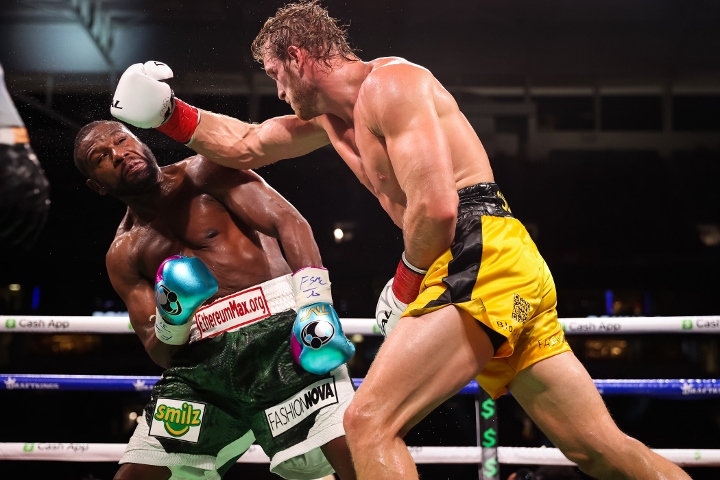 While there were many critics, UFC broadcaster Joe Rogan was a big fan of the recent exhibition fight between five division champion Floyd Mayweather and Youtube star Logan Paul.

Mayweather and Paul went the full eight round distance, at the Hard Rock Stadium in Miami, Florida.

The pay-per-view event was a big hit, with at least 1 million purchases projected just for the United States.

Mayweather, 44-years-old and retired since August of 2017, was shadow of the fighter who left the sport with a perfect 50-0 record.

Paul, 26-years-old and only have a single pro fight on his record, was six inches taller and had at least a 40-pound weight advantage.

Rogan was impressed that Mayweather, at 44, would decide to get in the ring with someone who was so much physically bigger – and he was also impressed with Paul’s ability to last the entire eight rounds.

“For people who got mad at it, I get it — it’s not Floyd Mayweather vs. Manny Pacquiao from five years ago,” Rogan said in a recent episode of his podcast. “But what it is is one of the best boxers of all time making $100 million fighting a guy that’s three feet taller than him and 35 pounds heavier than him who can’t win. It’s amazing, it’s amazing. That fight was amazing.

“There’s a lot of amazing things. First of all, Floyd is amazing. The fact that Floyd has the balls at 44 years old to decide, ‘oh I’m gonna fight some dude that’s 35 pounds heavier than me and 26 years old.’ It’s crazy.

“And then the fact that he can put it on Logan Paul and here’s another one — the fact that Logan Paul went all eight rounds. That’s astounding. You have no idea how tired you would be if you were boxing with the greatest boxer that ever lived.”