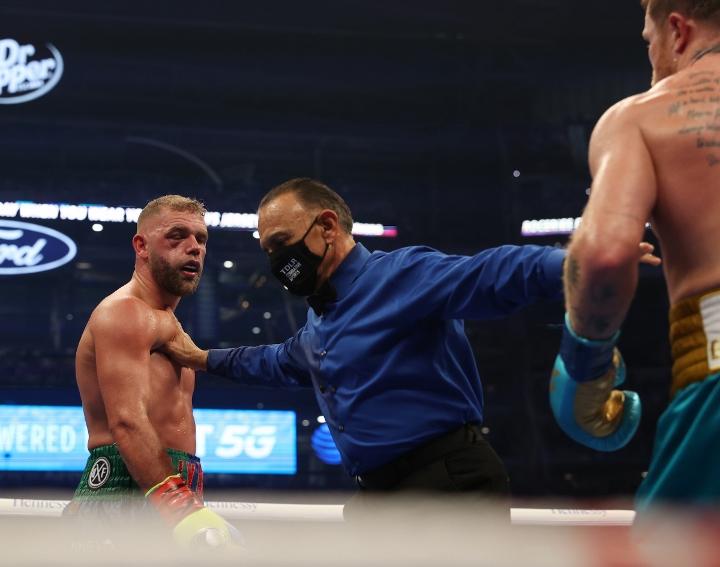 Hearn indicates that Saunders sustained “multiple fractures” to the area around his right eye after suffering a stoppage loss at the hands of Mexican superstar Saul “Canelo” Alvarez on Saturday night.

Before a crowd of over 73,000 fans at AT&T Stadium in Arlington, Saunders’ right eye was damaged in the eight round when Canelo landed a hard uppercut to the area.

The eye was rapidly beginning to swell up and starting to close.

When Saunders went back to the corner, he indicated to his team that his vision was impaired in the eye – and the contest was stopped before the start of the ninth.

“He couldn’t see. I spoke to [Saunders’ trainer] Mark Tibbs, he said he couldn’t see and he wouldn’t let him go out. He busted his eye socket,” Hearn stated to DAZN when the contest officially concluded.

Saunders was immediately taken to the hospital in the aftermath.

At the time of the stoppage, Saunders was down on all three scorecards, but he was certainly in the fight and won a few rounds with his tough southpaw boxing style.

Hearn expects Saunders to remain on the shelf for a long time while recovering.

“He’s going to be out for a long, long time,” Hearn said.