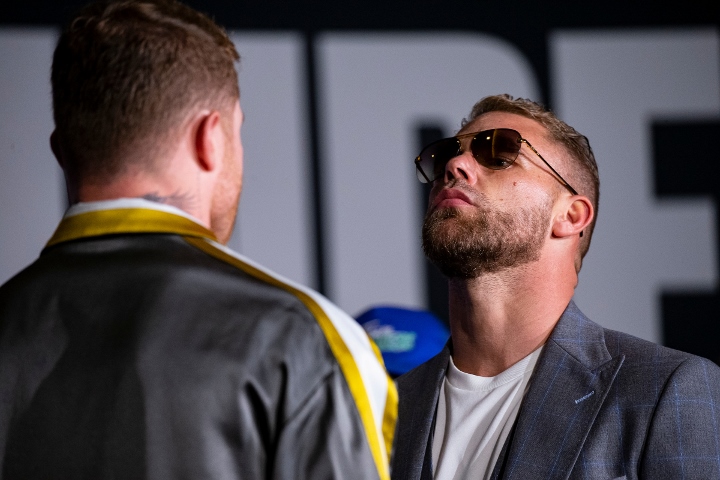 On a cold January day in 2019, I sat in the empty Ingle gym in Sheffield with Billy Joe Saunders and he told me he feared that his big opportunity would never come.

In 2018 he had signed to face Gennady Golovkin in Kazakhstan, but the fight never came off, he then lost his WBO title outside the ring, having been refused a license in Massachusetts after he tested positive for oxilofrine, a stimulant that, according to WADA rules, was only banned during in-competition testing. On top of that, he had also received the second-largest fine in history from the British Boxing Board of Control for a notorious social media video.

“When I first turned pro, my goal was to become a millionaire and be out of the sport at 31,” he said. “From 29-31 you are at your absolute peak. Sometimes that window shuts for people.

“I know no one has seen the best of me yet and that’s the worrying thing for me, will I ever get that chance?”

That chance comes this weekend in Dallas when he faces Saul “Canelo” Alvarez in a world super-middleweight unification fight. And no matter how big the ring is, Saunders is facing an uphill battle.

While Saunders is still within that peak window he had set for himself, the 28 months of his career since that conversation have hardly been scintillating. The Saunders that steps into the ring with Canelo has switched trainers several times, he has moved up in weight and failed to impress in three performances since. It is also nearly 3½ years since his career-best performance over David Lemieux, the one that was supposed to be his break into the big-time. Yet, Saunders has an unbreakable belief that he will win and so do many British fans too.

“This will be the greatest win by a Brit abroad,” he said. “Look Canelo has defeated six Brits, I’m the last body they’ve got to chuck out because there is no one else coming through in the super-middleweight division who has a better chance than myself.

“People may have different views, but I have my own views and my own vision. I’m the seventh Brit and if I don’t do it, then I don’t think anyone can do it.

“I’m not going to sit here and slag people off and big people up. I don’t really take anything from any of them because I do my own thing. That’s what’s going to win this fight, something I bring to the table that none of them had.

“Matthew Hatton did a good job many years ago, I still haven’t watched the Callum Smith fight now, I’ve seen highlights. But I think tactics may have been a little bit wrong there and a bit rushed because they didn’t have a lot of preparation for it.

“Ryan Rhodes also, but every fight is different and I never watch my opponents, never break them down and think ‘I’m going to hit him with a jab because he’s wide open for the jab’ because fighters like Canelo, you’ve got to beat them in the moment. Your brain has to be constantly thinking.”

Saunders should have got this fight 12 months ago and could have faced Canelo in December, but was not prepared to take the fight without a full camp. Perhaps that fact, more than any other, would point to the idea that Saunders is in Texas believing he can win.

“I’ve been away training since the end of January, there’s no excuse about time,” Saunders said. “There was a big concern this fight would be sprung on me but I’ve had plenty of notice.

“We had a house out here in Vegas, we left Fuerteventura after 10 weeks, now we came out here to finish the last month.

“It has been a long, good camp. I’m starting to get excited. When you are in Vegas there is so much exciting you, you just want to get out and go to the mall, keep your mind off the fight and do something to stop going insane but it is nearly over.”

Saunders has certainly not gone out of his way to make friends this week. He threatened to walk out over the size of the ring, even before Eddie Hearn had made it to Dallas. He also blamed Hearn for the lack of a UK judge, something Hearn pointed out was in the contract that Saunders agreed to. He has left no doubts that he believes he will not be able to get a fair run of things if it goes to the scorecards.

“We don’t want boxing to be known as corrupt, we don’t want to see a corrupt scorecard,” he said. “All of the fights I’ve had, if I got out and thought I lost it I would shake their hand and say ‘I lost that’. The judges are not in my hands.

“I can’t say if it is a close fight I’m going to get it because in the cold light of things I’m not. If it is a close fight and I win by a couple of rounds it will go the other way. If they’re going to rob Floyd Mayweather in Vegas for a draw when Floyd won every round, there’s not much chance for an old Gypsy boy from Hatfield is there?”

There will be many that refuse to accept Saunders, though, for all the out-of-ring issues. Certainly he has not made it easy to be a Billy Joe Saunders fan. Yet despite everything that has gone on, Saunders shows no sign of changing. Neither does he have any regrets.

“No regrets whatsoever,” he said. “I never regret anything, otherwise I wouldn’t do it.”

Ron Lewis is a senior writer for BoxingScene. He was Boxing Correspondent for The Times, where he worked from 2001-2019 – covering four Olympic Games and numerous world title fights across the globe. He has written about boxing for a wide variety of publications worldwide since the 1980s.