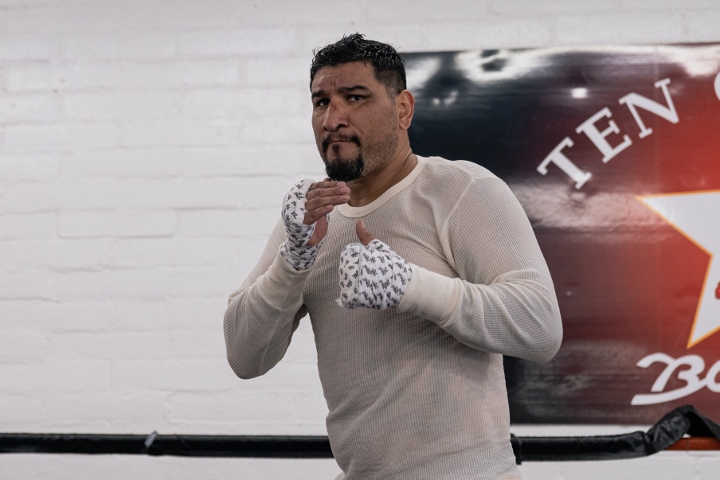 Heavyweight Chris “The Nightmare” Arreola is expected an all-out war when he faces former unified heavyweight champion Andy “The Destroyer” Ruiz on May 1. (photo by Ryan Hafey)

Their fight will headline a Fox Sports PBC Pay-Per-View event on Saturday, May 1 from Dignity Health Sports Park in Carson, California.

Arreola has been away from the ring since a 2019 war of a fight with Adam Kownacki, who walked away with a decision win.

Ruiz himself has been out of the ring since losing his world titles to Anthony Joshua in December of 2019 in Saudi Arabia.

For Arreola, the fight is a do or die opportunity to get his career back on track.

“I’m ready for this fight. I’ve been waiting for this fight for four or five months. This one is going to be a barnburner for sure. This fight is important for my legacy. I want to make the fans happy they bought this fight. I don’t fight for paychecks. I’m a fighter for the fans. So I hope they enjoy this fight and buy this pay-per-view,” Arreola said.

“I love what I do. I’m a fortunate person to have been a fighter since a young age. I bleed boxing. I put my whole self out there every time I fight. I know that I owe it to the fans to give them a great fight. Defensively I’ve grown so much working with Joe [Goossen]. He’s taught me a lot about keeping my hands up and countering. He hasn’t reinvented the wheel, he’s just made sure the wheel is round.

“I was able to keep up the pace against Kownacki because I did everything I had to do in the gym. I could have given three more rounds at the end of that fight too. The fight is always won in the gym and we put all of the work in to win that fight. I thought I won that fight. Despite not getting the decision, it was a fun fight for me.

“I feel great. I’ve been working hard for months. I know that I have to make this a great fight for the fans and for myself. I know how crucial this fight is for my career. I don’t pay attention to the odds. If people want to make me the underdog, I’m comfortable with that. I’ve been an underdog my whole life.”