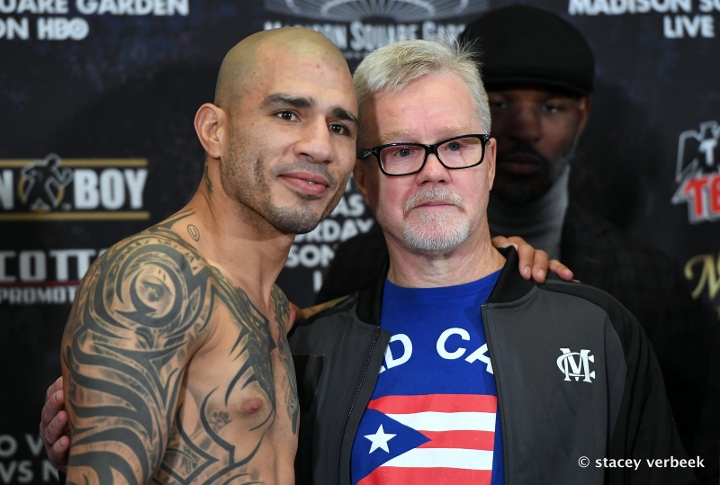 They were unable to reach an agreement in 2016, but former four division world champions Miguel Cotto and Juan Manuel Marquez will settle their unfinished business in two months time.

As BoxingScene.com previously reported, the two boxers will come out of retirement to take part in an eight round exhibition clash on June 12.  Venues in Florida and Texas are being reviewed.

Five years ago, the two boxers were in serious discussions to face each other. Ultimately they were unable to reach an agreement on the weight limit.

The exhibition fight will be broadcast on the pay-per-view – looking to capitalize on the November 2020 exhibition clash between Mike Tyson and Roy Jones – which generated 1.6 million PPV buys.

According to Carlos Narvaez, newly crowned World Boxing Council (WBC) interim flyweight champion, McWilliams Arroyo, is possibly going to make his first defense in the co-feature. Other Puerto Ricans such as the Pan American gold medalist Oscar Collazo could also be included on the card.

There is also a preliminary agreement that calls for both boxers to use 14-ounce gloves and there won’t be any judges involved to score the fight. Promotional events will take place in Mexico and Puerto Rico.

Both boxers will have the services of their Hall of Fame trainers.

Cotto, 40, will have Freddie Roach, while Marquez, 47, will be prepared by Nacho Beristain.

“I have generally disapproved of all boxers who retire and decide to return,” Beristain said.

“But in this case, in the case of an exhibition, for both of us I believe that I recognize that it will be a long-awaited confrontation that, due to the difference in weight, did not occur [years ago], but now because it is an exhibition, they are going to hold a meeting [in the ring] of great class.

Cotto, who finished his career with a record of 41-6 with 33 KOs, retired in 2017 after losing to Saddam Ali. The Puerto Rican boxer was champion at junior welterweight, welterweight, super welterweight and middleweight divisions.

“Puerto Rico and Mexico is one of the greatest rivalries in boxing,” Roach said. “And Miguel Cotto and Juan Manuel Márquez are two elite fighters who will undoubtedly give an incredible display that no one should miss. The Mexican and Puerto Rican fans are without a doubt the best boxing has and they deserve this.”

Marquez retired in 2014 with a record of 56-7-1 and 40 KO’s. He was world champion at featherweight, super featherweight, lightweight and junior welterweight.

Caf Champions League: Simba SC will deal with any team in quarter-finals – Manara

Caf Champions League: Simba SC will deal with any team in quarter-finals – Manara