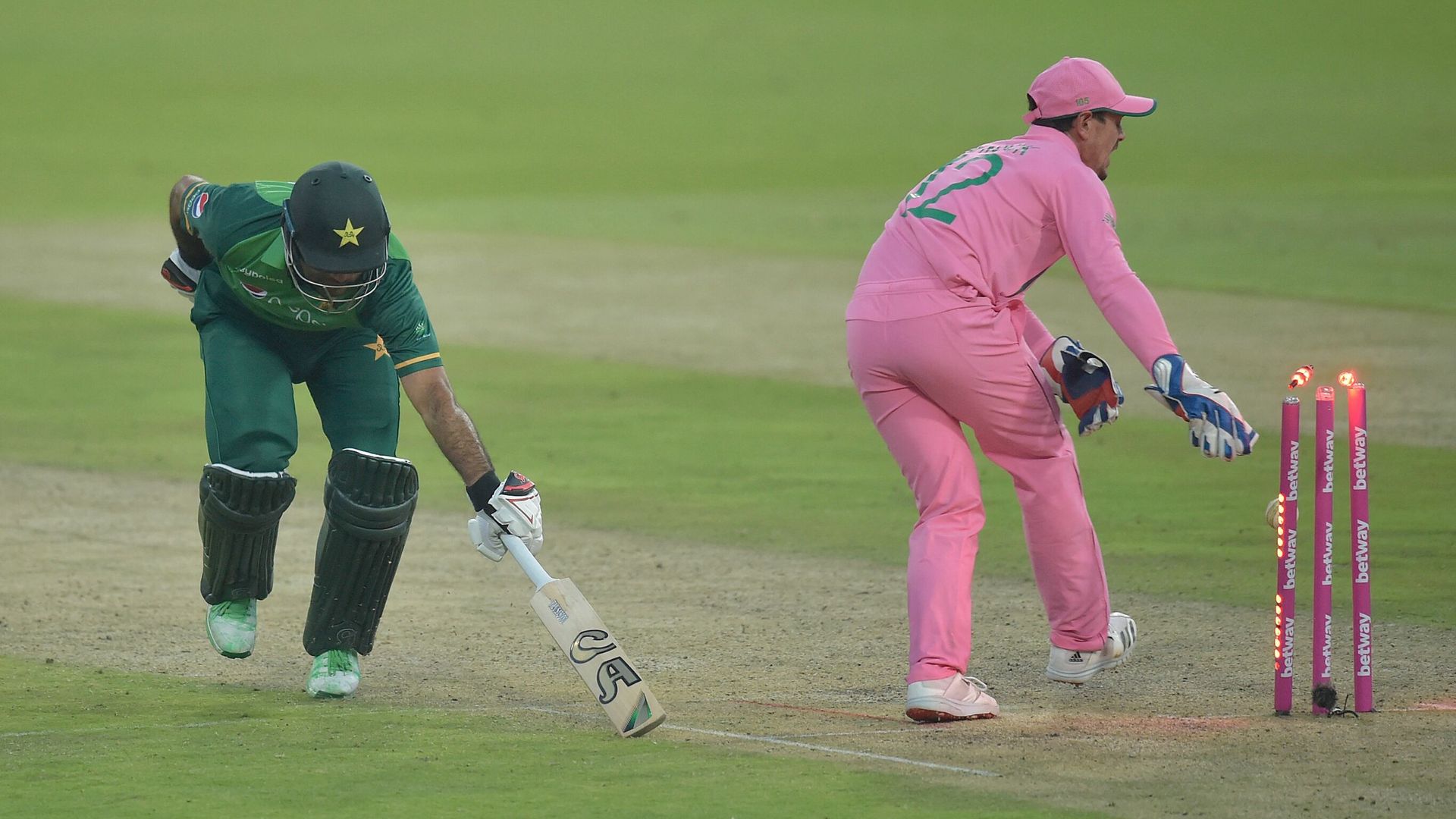 Pakistan batsman Fakhar Zaman run out in second ODI after appearing to be deceived by South Africa wicketkeeper Quinton de Kock pointing at the bowler’s end; MCC says it is up to the umpires to decide whether De Kock intentionally attempted to mislead

Innocent, clever or against the spirit of the game?

That is the question doing the rounds following the role South Africa wicketkeeper Quinton de Kock played in the run out of Pakistan’s Fakhar Zaman during Sunday’s thrilling one-day international in Johannesburg.

Fakhar was dismissed for a superb 193 in the final over, having seemingly been deceived, intentionally or not, by De Kock pointing at the bowler’s end as the batsman looked to complete a second run.

Fakhar slowed down, perhaps believing the ball was heading towards the non-striker’s end, and was then run out as Aiden Markram shot down the stumps at the keeper’s end with a direct hit from long-off.

The Proteas hold on to take #SAvPAK ODI series to a decider – and just look at the role De Kock played in the run out of Fakhar for 193!

Fakhar, whose sensational innings had threatened to see Pakistan pull off a stunning win and seal a series victory, did not criticise De Kock after the game, instead saying the run out was his own fault.

“The fault was mine as I was too busy looking out for Haris Rauf [his batting partner] at the other end. I felt he’d started off a little late from his crease so I thought he was in trouble,” he said. “The rest is up to the match referee, but I don’t think it’s Quinton’s fault.”

South Africa captain Temba Bavuma added: “It was quite clever from Quinny. Maybe some people might criticise it for maybe not being in the spirit of the game. But it was an important wicket for us. Zaman was getting close to our target.

“You’ve always got to look for ways especially when things are not going your way, got to find ways to turn momentum around. Quinny did that – I don’t think he broke the rules in any kind of way.”

Pakistan, chasing 342, needed 31 to win at the start of the final over but had the incident been deemed a case of deliberate distraction, it would have left the tourists requiring 24 from six balls.

Pakistan would have been awarded five runs as well as the two runs they ran, with the batsmen then able to choose which of them would be on strike for the next ball.

The “fake fielding” law was incorporated into the International Cricket Council’s playing conditions in 2017.

The Marylebone Cricket Club (MCC) later tweeted that it is up to the umpires to decide whether De Kock’s actions broke Law 41.5, which relates to “wilfully attempting, by word or action, to distract, deceive or obstruct either batsman after the striker has received the ball.”

The Law is clear, with the offence being an ATTEMPT to deceive, rather than the batsman actually being deceived.

It’s up to the umpires to decide if there was such an attempt. If so, then it’s Not out, 5 Penalty runs + the 2 they ran, and batsmen choose who faces next ball.

Plenty of pundits and former cricketers had their say on social media, including Pakistan bowling coach Waqar Younis.

@alanwilkins22 I tend to agree with you on this…initially thought it was clever. This is where the umpires need to act & act quickly. But doesn’t take away what an incredible innings by @FakharZamanLive

Quinton de Kock was cheeky with that Fakhar Zaman run out. But it is interesting that the umps didn’t see it as a fake fielding. It will be an interesting debate.

Watch the third and final ODI between South Africa and Pakistan, from Centurion, live on Sky Sports Cricket from 8.55am on Wednesday.