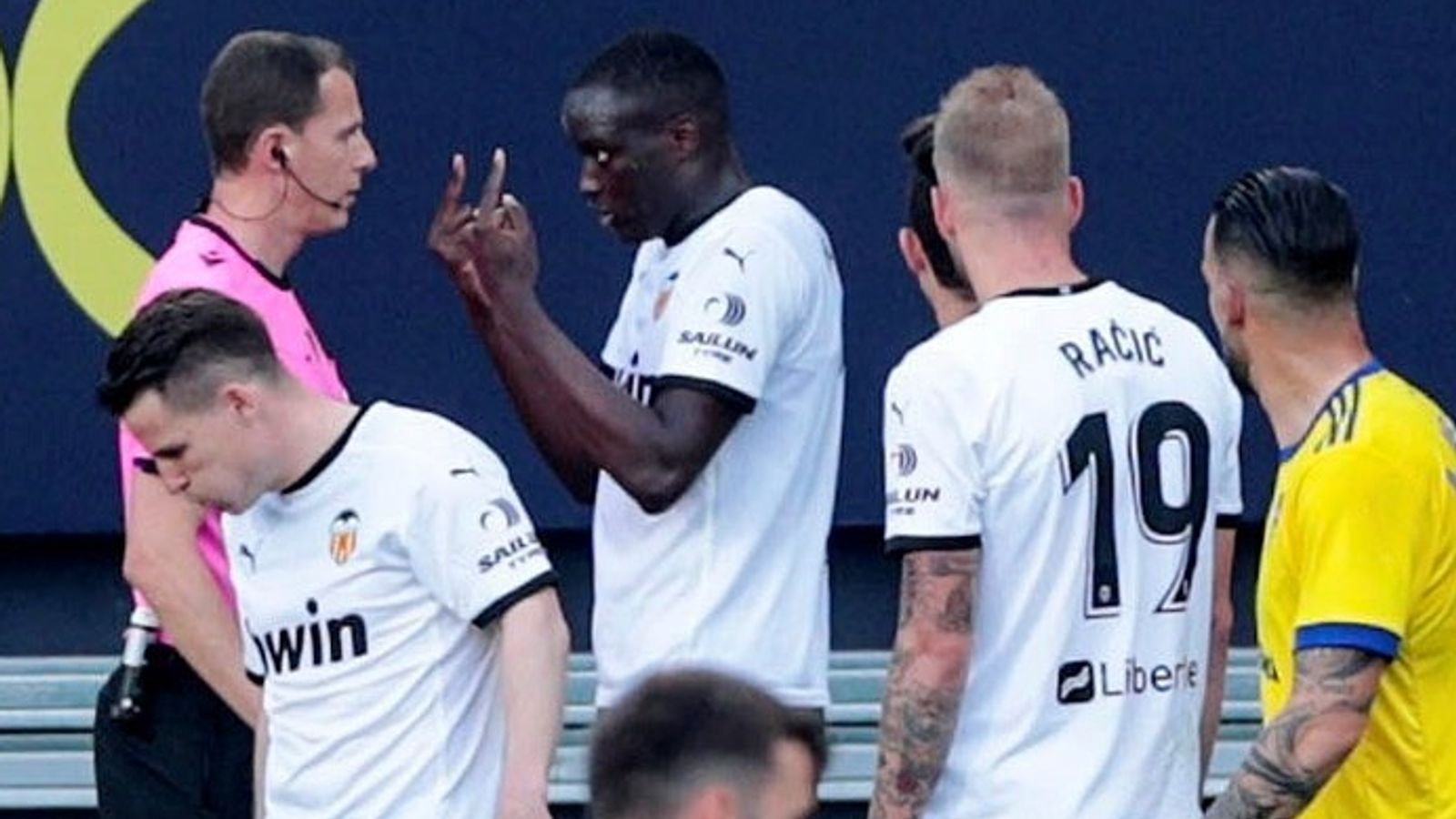 The referee’s report has given more details around the alleged racist incident during Valencia’s match at Cadiz on Sunday.

The La Liga game was temporarily halted after a first-half confrontation and verbal exchange between Valencia’s Mouctar Diakhaby and Cadiz’s Juan Cala prompted the visiting team to walk off the pitch.

Valencia’s players then held a meeting before concluding the match “in order to fight for the honour of the club, but denounce racism of any kind”.

Cala will address the media on Tuesday, but told Spanish channel Gol on Monday he is “very relaxed” about the allegations, while Cadiz have said the club “do not doubt the honesty of all members of our squad”.

In the match report, official David Medie Jimenez said the alleged phrase was not heard by any member of the refereeing team.

“In the 29th minute I stopped the match due to a confrontation between players from both sides. Player number 12 of Valencia C.F., Mouctar Diakhaby, once booked for arguing with an opponent, tells me word for word: “He called me a s***** black man” in reference to player number 16 of Cadiz C.F. Juan Torres Ruiz (Juan Cala).

“This fact was not perceived by any member of the refereeing team. After a few moments, Valencia C.F. decide to abandon the pitch. For this reason, the match is temporarily suspended. Both sides enter their respective changing rooms. After a few minutes of suspension, the Valencia C.F. delegate David Rangel Pastor, in presence of the Cadiz C.F. delegate Antonio Navarrete Reyes, tells us that they decide to substitute player number 12 Mouctar Diakhaby and continue with the game.

“Moreover, it was agreed to give both sides a five-minute warm-up in order to avoid injuries. The match was resumed 24 minutes after suspending it, and was carried out as normal from that moment onwards.”

According to Cadiz coach Alvaro Cervera, Cala said “at no point did he insult” Diakhaby.

“I saw the same as you did,” Cervera said, per the club’s website. “They left the field alongside the referee because they said that Cala had insulted one of their players. Cala says that at no point did he insult the opposition player.”

On Monday, Cala told Gol: “I’m very relaxed. Tomorrow we will say everything in the press conference. It seems to me that in this country innocence is not contemplated.”

🗣 Juan Cala will speak to the media on Tuesday after the training session.

The incident occurred just before the half-hour mark after Diakhaby collided with Cala as Cadiz launched a free-kick into the Valencia box.

The French defender was visibly angry and after an exchange in which he had to be held back by team-mate Kevin Gameiro and Cadiz’s Fali, he was shown a yellow card for unsportsmanlike conduct.

After speaking to the referee further to explain the reason for his outburst, the player walked off the pitch and down the tunnel alongside his team-mates with the game poised at 1-1.

The match then resumed 24 minutes later following discussions among the Valencia players, with captain Jose Gaya revealing Diakhaby had asked the team to continue without him.

Diakhaby was replaced by Hugo Guillamon, while Cala remained in the Cadiz line-up upon the restart until being substituted at half-time. Cadiz went on to win the match 2-1 at the Carranza Stadium.

The team have held a meeting and decided to continue the game, in order to fight for the honour of the club, but denounce racism of any kind.#CádizValencia

A tweet from Valencia after the match stated they offer their complete backing to their player.

It said: “The player, who had received a racial insult, requested that his teammates return to the pitch. WE SUPPORT YOU MOUCTAR. NO TO RACISM.”

After the game, Gaya said: “Diakhaby mentioned to us there were some insults from the opposition, and we are not going to accept that.

We offer our complete backing to @Diakhaby_5

The player, who had received a racial insult, requested that his teammates return to the pitch.

WE SUPPORT YOU MOUCTAR

“We decided to leave the pitch and were just waiting to see what was going to happen.

“That’s what happened and Diakhaby asked us to return as well and that’s why we decided to come back.

“We did what we were told – we were told to come back to the pitch or lose three points or possibly a few more but we did so because Diakhaby asked us to do so.

“He told us to continue but he didn’t want to – he’s not happy after the game, he’s quite upset and very hurt.”

A Cadiz club statement on Sunday said: “We are against any situation of racism or xenophobia, whoever the author, and we work for its eradication. All the perpetrators of these crimes, whether or not they are from our team, must pay for it.

“We do not doubt the honesty of all members of our squad, who are firm defenders of the fight against racism, whose attitude has always been exemplary in all the matches that have been played.

“The club cannot enter into assessments of the issues of the game between the players, and we always demand an attitude of respect and responsibility towards the opponents.”