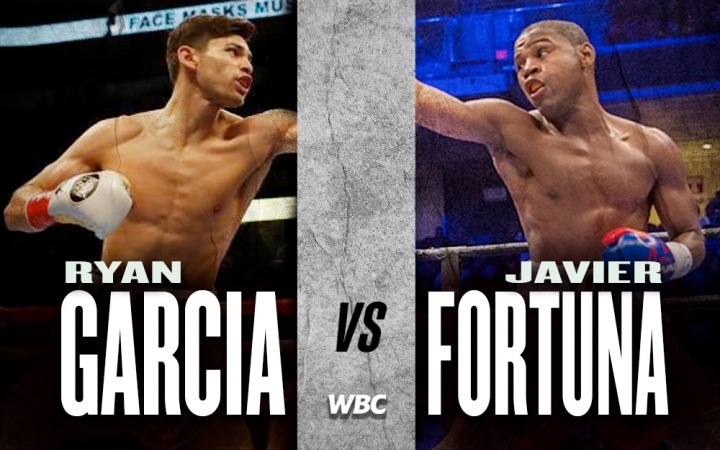 Interim lightweight titlist Ryan Garcia, boxing’s hottest rising star, and veteran contender Javier Fortuna have agreed to terms to meet in a mandated bout, a source with knowledge of the deal told BoxingScene on Friday night.

The terms for the fight, which will headline a Golden Boy Promotions card on DAZN, are agreed to and it will take place on a date to be determined in July with the likely site being either in Las Vegas or Los Angeles, according to the source.

A purse bid for the 135-pound bout that the WBC ordered on March 25 is scheduled for April 16, but that will be canceled once the paperwork is signed, the source said.

Garcia acknowledged the fight with Fortuna, telling BoxingScene in a text message when asked about the deal, “My only thought (is) it will take me 1-3 rounds to knock him out.”

Garcia has scored knockouts inside two rounds in three of his last four bouts, stopping Francisco Fonseca and Romero Duno in the first round and Jose Lopez in the second round.

The fight against Fortuna will mark the second bona fide contender in a row that Garcia (21-0, 18 KOs), 22, of Victorville, California, will face.

On Jan. 2, “King Ry” survived a hard knockdown in the second round but otherwise controlled and then knocked out England’s Luke Campbell, a former two-time world title challenger and Olympic gold medalist, in the seventh round to win the WBC’s vacant interim lightweight title belt at the American Airlines Center in Dallas in a DAZN-streamed main event.

The WBC then ordered Garcia to defend against Fortuna (36-2-1, 25 KOs), 31, of the Dominican Republic, with the winner to be named the official mandatory challenger for world titleholder Devin Haney (25-0, 15 KOs), 22, of Las Vegas.

First, however, Haney is scheduled to make his third title defense against former three-division world titlist Jorge Linares (47-5, 29 KOs), 35, of Venezuela, on May 29 (DAZN) at Mandalay Bay in Las Vegas.

DAZN is hoping to eventually put on a fight between Haney and Garcia, which is one of the most attractive fights that can be made in a talent-laden division that also includes unified world champion Teofimo Lopez Jr. and secondary titlist Gervonta “Tank” Davis.

Fortuna, a former secondary junior lightweight world titlist, has won three fights in a row, most recently scoring a sixth-round knockout of Antonio Lozada on Nov. 21 at Staples Center in Los Angeles.

The Athletic first reported that a deal had been agreed to.