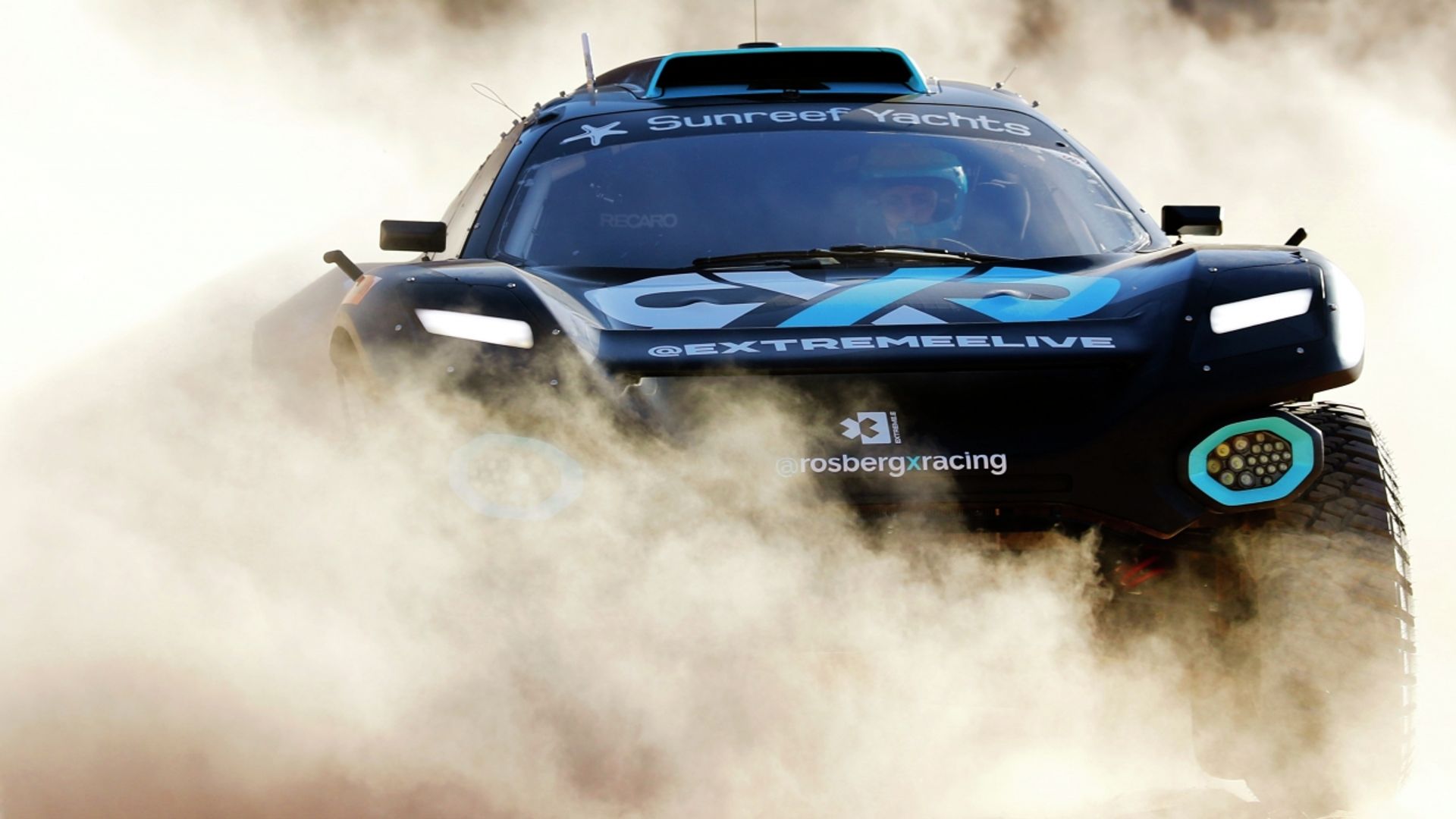 Extreme E makes a dramatic debut in Saudi Arabia with two big barrel-roll crashes in the first round of qualifying; Nico Rosberg’s team sets the early pace, Jenson Button fifth quickest for his own team; Qualifying Round Two live at midday on Sky Sports Action and Mix

The nine teams – who each field a male and female driver in electric Odyssey 21 SUVs – are competing on an 18.8km undulating course through sand and rock, which features a daunting 100-metre drop.

Qualifying is split across two time trials, with aggregate timing in play to determine Sunday’s semi finals and final, and the first on Saturday morning proved hugely dramatic.

Stephane Sarrazin, who competed in the 1999 French GP and is a veteran in sportscars, rolled his Voloce Racing car in the third run of the session.

The crash meant that British team-mate Jamie Chadwick could not complete her lap and leaves the team’s participation in the second qualifying round in doubt with significant car repairs required.

Claudia Hurtgen then had an even more spectacular accident during her run in the car, with her ABT appearing to dig into the sand before flipping over several times. Both drivers walked away unscathed.

On the timesheet, Rosberg’s X Racing team pairing of Molly Taylor and Johan Kristoffersson set the pace with a best lap of 10:43.565.

Rosberg, the 2016 F1 world champion and Sky Sports pundit, is attending the event and said: “It’s only early days but it’s a good start for us like this. They’ve learned a lot, both drivers felt comfortable in the car. So I’m very pleased so far.”

Hamilton’s X44 team had the honour of going first with nine-time World Rally champion Sebastien Loeb and Cristina Gutierrez setting the early benchmark. They remain in the hunt to top qualifying heading into the second session, with just four seconds covering the leading cars over the full 18.8km course.

Jenson Button is the third F1 world champion with a team in the series – but the only one also driving. A mechanical issue briefly stopped his team’s JBXE car during team-mate Mikaela Ahlin-Kottulinsky’s lap. The Sky F1 pundit ended the session in fifth place.

Round Two takes place at 12.30pm BST, which live coverage on Sky Sports Action and Mix from midday.

What is Extreme E?

Extreme E is an exciting new motorsport, racing all-electric SUVs off-road in five different venues across diverse, challenging terrains. These venues are located in some of the most remote places on earth, and they’ve been chosen because these places have been devastated by the effects of climate change.

As such, as well as the sporting spectacle, Extreme E is deliberately set out to highlight the destruction of the planet and inspire people, companies and locations to take positive steps in climate action. The use of electric vehicles is part of the solution, and also a chance for teams and manufacturers to test and showcase their latest automotive technology.

This sport is the brainchild of Alejandro Agag, a Spanish businessman previously involved in Formula 1 with drivers such as Romain Grosjean and who also founded Formula E, the all-electric single-seater city-centre series.

Who is involved?
There are nine teams, each with one male and female driver (gender equality being another pillar of Extreme E), including famous names from many different motorsports.

Also among the driver line-up are former world rally champions Sébastien Loeb who won nine straight titles between 2004 and 2012 and twice-winner Carlos Sainz who has three Dakar Rally crowns.

Rallycross is represented mainly by Swedish trio Johan Kristoffersson, Timmy Hansen and Mattias Ekström who between them have won the last five world titles.

As for other British interest, Jamie Chadwick is the current W Series champion and a development driver with Williams F1, while Catie Munnings lifted the Ladies Trophy at the European Rally Championship in 2016. The other Briton involved is Oli Bennett, who won seven out of nine races in the 2017 British Rallycross Championship.

Behind the scenes, there are further F1 links with McLaren Racing CEO Zak Brown as Andretti United’s team principal, while Adrian Newey, Chief Technical Officer at Red Bull Racing, and ex-driver Jean-Eric Vergne are both with Veloce Racing.

How does the racing work?
All the action takes place over two days. On Saturday all the teams will do two qualifying runs of the course, with the male and female driver each driving a lap and a changeover (known as ‘The Switch’) in between. Each of these runs will total roughly 18 kilometres, and their combined times will produce an order.

Points are awarded by placing, as you go from first (XPrix winner) to ninth place (third finisher in ‘The Shootout’).

There are other unique features to spice up the racing yet further, such as ‘Hyperdrive’: whoever performs the longest jump on the first jump of each race is awarded an additional boost of speed, and that team also gets an extra championship point.

No fans will be in situ at the races (to keep the series’ carbon footprint to a minimum), but the ‘Gridplay’ feature lets them vote for their favourite driver to gain grid advantage. The team who receives the most votes can select its grid position for the final, but if they’re not in it, they can gift their votes to another team of their choice. The team with the second-most votes gets second choice of grid spot, and so on.

As part of Extreme E’s sustainability drive, each vote also includes a micro-payment towards the master charity / Legacy Programme.

What are the venues?
Strap yourselves in, this is going to be quite some global expedition.

There are five different venues for the races in Extreme E’s inaugural season, all themed around different remote locations and related environmental issues. They start in AlUla in Saudi Arabia for the Desert XPrix in early April, then head to Lac Rose in Senegal in late May for the Ocean XPrix.

Then there’s a gap of roughly three months before round 3 in Greenland on the Russell Glacier near Kangerlussuaq (Arctic XPrix) at the end of August, and after that we head south – to Santa Maria, Belterra in the Pará region of Brazil for the Amazon XPrix in October and finally Tierra del Fuego in Argentina for the Glacier XPrix in mid-December.