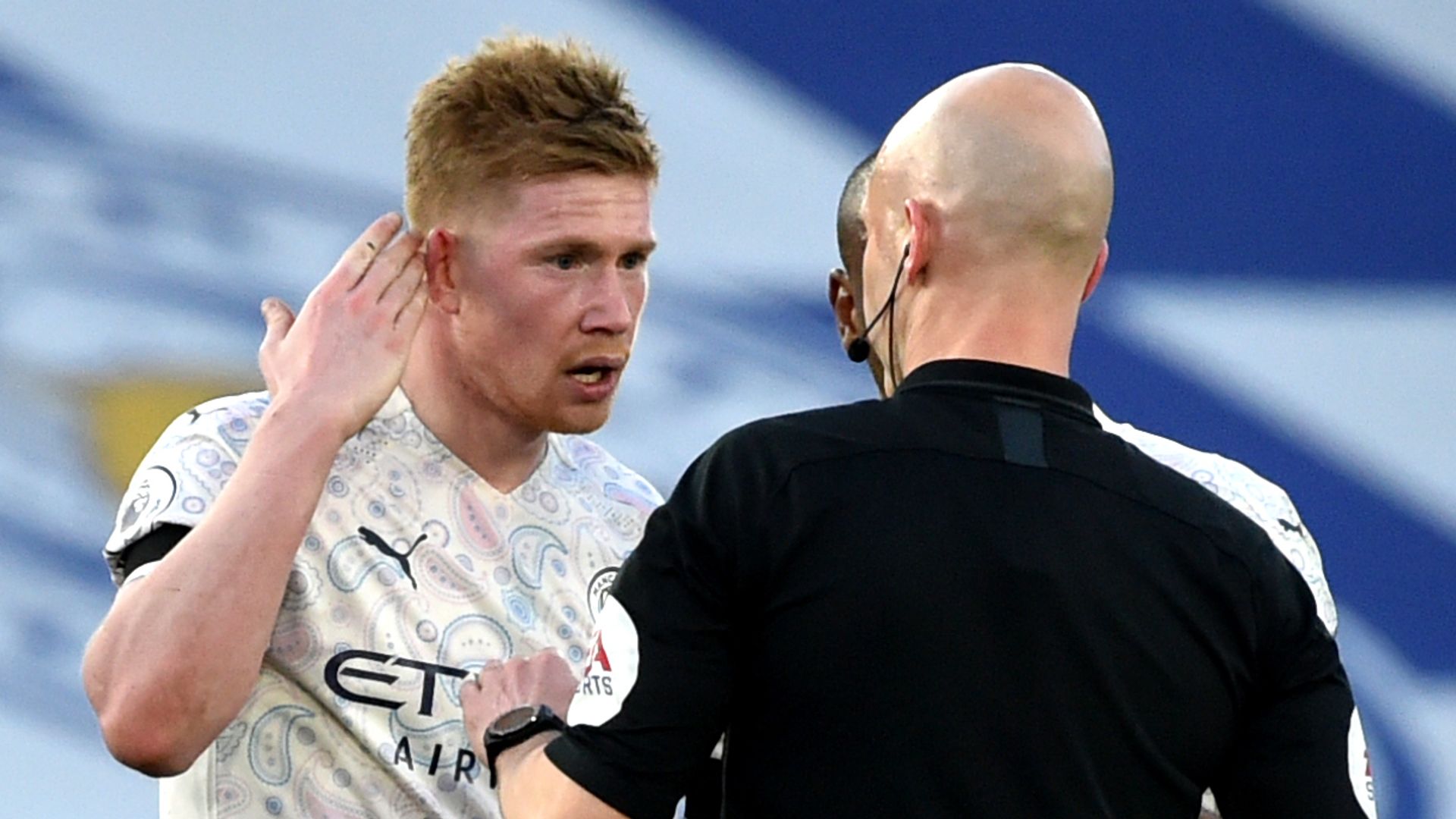 Kevin De Bruyne produced another scintillating display as Manchester City continued their march to the title at Leicester, with Jamie Redknapp hailing the Belgian as the Premier League’s greatest-ever passer.

Benjamin Mendy’s second-half opener sent Pep Guardiola’s side on their way to a 2-0 win over the Foxes at the King Power Stadium with City now 17 points clear at the top with seven games left after a 26th win in their last 27 games.

Gabriel Jesus grabbed a second with 16 minutes remaining as he stabbed in his fifth strike in six top-flight games against Leicester from Raheem Sterling’s square pass but the goal was sparked by De Bruyne’s sumptuous throughball.

Redknapp told Sky Sports: “We’ve spoken before about the Premier League’s best strikers, but when it comes to the league’s best ever passers, Kevin De Bruyne is the best the Premier League has ever seen. I’ve never seen anyone like him. The weight of the ball, the killer-ball passes, the precision, is just phenomenal.

“All great players look like they have more time than everyone else on the pitch. His football IQ is so high with the way he spots the pass, analyses it and then his ability to execute it is just phenomenal. Everything looks so easy for him. He’s probably already given his Easter Eggs out, he’s so far ahead of everyone else!”

Micah Richards added: “He’s got to be up there with the best midfielders in Europe and the world. If you see the positions he picks up… the reason he’s so hard to mark is because he always finds a bit of space. He can play on his left foot, on his right foot, and is always looking to pass forward when he gets the ball.

“He can shoot, he can tackle, he can press. He can do absolutely everything.”

Guardiola hailed the brilliance of De Bruyne, highlighting how he leads by example with his work rate off the ball following the victory in the Midlands.

The Catalan was delighted with the patience his team showed, attacking at the right moments to secure a 23rd Premier League win of the season and a 15th successive in all competitions away from home.

The solidarity in the City dressing room was seen in the manner the team celebrated Mendy’s opener – a player Guardiola described as a “special person” with an “incredible heart”. But it was the performance of De Bruyne, who made 14 ball recoveries, that stood out once more.

When asked about the Belgian’s pass in the build-up to Jesus’ strike to make it 2-0, Guardiola said: “It was quite good, huh? It’s not the first time he’s done it. Now, in the next game, he needs to score a goal. Kevin in this situation is extraordinary.”

But is what he does when not in possession sometimes overlooked?

“This is part of our identity,” Guardiola added on his ball recoveries. “Even one of the most talented players in the squad does this job. It sets the example to the rest of the players.

City are unbeaten in 18 on the road, last losing an away fixture in November 2020 against Tottenham, and they require a maximum of 11 points to secure a third Premier League title in four years.

“The players proved again just how consistent they are in every game,” Guardiola added. “This was a tough opponent so it’s a huge win. We need two or three more victories but we now focus on the next one which is Borussia Dortmund. When I spoke to some of the players when they came back, some said they were tired so we picked the fresh legs today.

“The players that didn’t play the last game on international duty were ready to play and our commitment on the ball and patience was there. That’s what you need when you play against Leicester due to their pace on the counter-attack. It’s another step.”

Brendan Rodgers confirmed that Caglar Soyuncu was unable to play as a result of a positive Covid test, so the centre-back is still in his bubble with the Turkish national team.

The Foxes boss added that the defender is feeling “fine” but that the club and the Turkish football federation are corresponding to ensure he returns at the right time and gets back to playing as soon as possible.

Leicester remain in third place on 56 points and Rodgers admits his team were undone for City’s second by a moment of supreme quality.

“Technically, he’s arguably the world’s best midfield player,” he said on De Bruyne. “Everything he does is with real quality, and you could see that with the pass in the build up to the second goal.

“In the first hour of the game we were defensively strong and didn’t give away too much. In the moments we did play through we could’ve been a threat and thought we might have made a breakthrough before half-time.

“We got a bit disorganised for the two goals. The second comes from a throw-in which we spoke about beforehand but we lost to the better team.

“We then created some chances but we can have no complaints as we weren’t as efficient as we’d have liked to have been. We didn’t make the best decisions with the ball, exploiting the sides and at times we brought it inside too early. With the changes they can make, they’re a world-class team.”

“If you can get me £500m then we probably won’t be too far off it,” he continued when asked if he thought Leicester can reach the levels on Manchester City.

“They’re an incredible team. You can see how we’re trying to play and our ideas of play are there. But Pep for me is the best in the world, he’s an incredible operator. He has hugely gifted players who can do every facet of the game. They’re technically immaculate and tactically strong. The top players are always ambitious.

“We showed in our last game against Manchester United, we pressed well and passed the ball well which is what we’ve been developing over the past couple of years. Hopefully, if I can be here for the full five years in the same way Pep’s been in charge, we can consistently improve and get better.”

Leicester now go to West Ham next Sunday, live on Sky Sports Premier League at 2.05pm, while Manchester City host Borussia Dortmund in their Champions League quarter-final first leg at 8pm on Tuesday, before hosting Leeds in the Premier League at 12.30pm on Saturday.