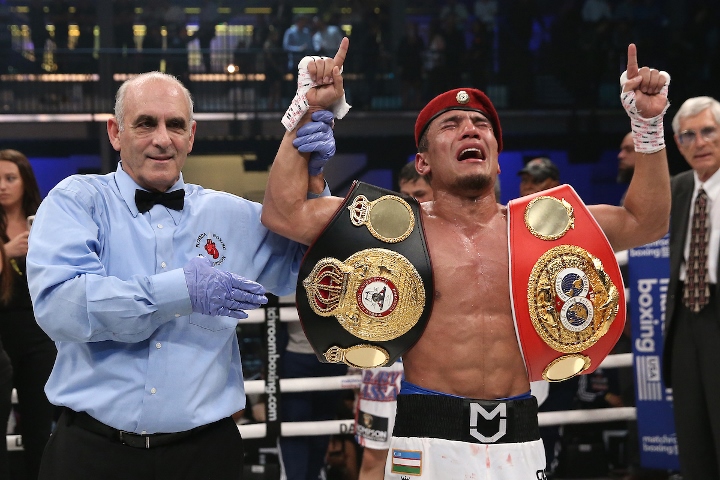 Murodjon Akhmadaliev stated his case as the best of a loaded junior featherweight division.

The unified WBA/IBF 122-pound titlist made his first successful defense with a 5th round stoppage of Japan’s Ryosuke Iwasa. Akhmadaliev was in complete control, although eyebrows were raised when the fight was abruptly stopped in the middle of an exchange during round five Saturday at Humo Arena in Tashkent, Uzbekistan.

Akhmadaliev—a 2016 Olympic Bronze medalist for Uzbekistan—was fighting in front of his compatriots for the first time as a pro. All of his previous bouts have taken place overseas in the United States.

Iwasa was last seen in the ring in December 2019 against Marlon Tapales. The 31-year old IBF mandatory challenger was the first to land a punch – a sneaky right jab, one of many he had thrown in the first round.

Akhmadaliev was reserved, cautious, looking for an opening but the Japanese fighter was aware of danger and didn’t let the champion to land any punches cleanly, though Akhmadaliev did connect with some power shots at the end but that was not a problem for Iwasa.

The problem was the Japanese fighter started to lose the jabbing contest in the second round. Both fighters threw a number of them but the Uzbek champion was more consistent. He also added body shots to bang Iwasa’s body during the first minute of the round. Iwasa retaliated with a left hook to the liver of his own and also added a left hand at the of the round but MJ was landing too many jabs and power shots.

It was all the same in the third. Akhmadaliev was dominant with his front hand, landing it one-two-three more times than Iwasa, whose defense became inconsistent. Body punches and overhand right hands kept the Japanese annoyed. Once again, Iwasa turned more aggressive and landed some punches during the last thirty seconds of the stanza but it didn’t look like it made it for him. The best punch of the fight was a corker of the right uppercut landed by MJ.

Akhmadaliev, 26, was working hard to outpunch and overwhelm Iwasa in the fourth but Iwasa was standing his ground. Iwasa connected with a huge left hand to catch MJ’s attention close to the end of the round. Still the champion was dominating it though Iwasa was game and determined.

The start of the fifth was catastrophic for the Japanese. MJ landed a fast combination, which wobbled Iwasa and out him on a queer street. He was coming back without throwing punches but soaked up numerous punches of Akhmadaliev – both jabs and power shots – well. He halted the Uzbek’s offensive surge with a nice left/right combo, also sneaking in an uppercut. MJ then again threw and landed a right hook slightly rocking the Japanese. He once again moved backwards, as Akhmadaliev was landing shots. Those shots were landing cleanly but Iwasa was fully conscious and somehow landed a jab in retaliation during the barrage. It was when the Russian referee Yuri Koptsev quite unexpectedly moved in and waved the fight off, as Iwasa was just preparing his act of retaliation.

The stoppage, which came at 1:30 of the fifth, looked both premature and inconsistent. It was inconsistent because Koptsev didn’t pay – at least visibly – way too much attention during the original barrage by MJ, which started the round. He only began to show signs of urgency during the second barrage. And it was premature as Iwasa, well-known for his durability and punch resistance, was taking the beating well and was competitive through the previous rounds.