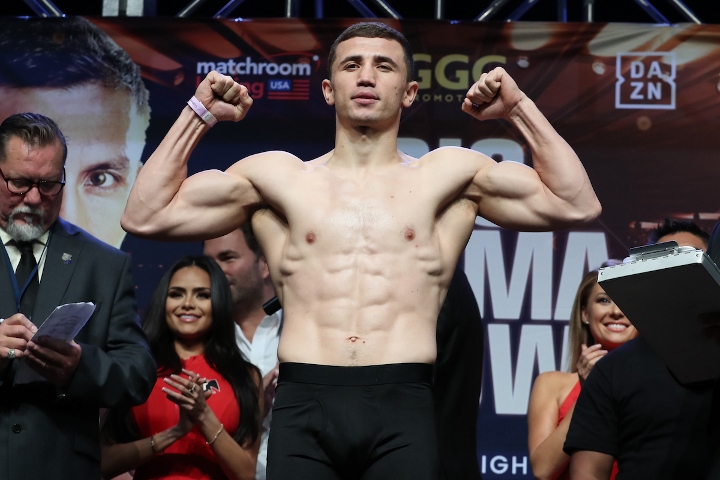 Buried within the undercards of this weekend’s fights looms a highly intriguing, and in all probability, Hagler-Hearns type war between two undefeated knockout artists waged in the unlikely and obscure location of Tashkent, Uzbekistan. Israil Madrimov (6-0, 5 KOs) returns to do battle in his native land for the first time against Emmany Kalombo (14-0, 14 KOs) of the Democratic Republic of Congo. The high stakes junior middleweight showdown, streamed live on DAZN on Saturday, April 3, is on the undercard of Murodjanon Akhmadaliev (8-0, 6 KOs) vs. Ryusuke Iwasa for Akhmadaliev’s two alphabet titles.

Madrimov’s and Kalombo’s combined knockout rate of 95 percent is a strong indicator that their collision course will not go the distance. And their contrasting styles makes it excruciatingly difficult to predict who will likely be first to land a fight-ending or fight-changing shot.

Madrimov, in many ways, resembles a blown up version of Prince Naseem Hamed. Although he is listed as an orthodox fighter, he often switches to southpaw and punches from every direction and range upstairs and down. Utilizing sneaky footwork from both stances, he checks and ambushes his opponents from unexpected angles. Like Hamed, Madrimov’s free-swinging attacks often seem reckless, risky and ill-conceived but it has worked for him so far.

Kalombo, on the other hand, is a more calculated assassin. Like a hybrid between Thomas Hearns and Terry Norris, he picks his spots with precision and power but can also fire in bursts when the occasion calls for it. Kalombo’s deadliest weapon is the left hook but he can seriously crack with his right hand as well. He also momentarily switches stances from time to time.

In terms of defense, both fighters score about a B grade on their report cards.

Do not let Madrimov’s sparse professional record deceive you. Like Lomachenko, Inouye, Rigondieux and Beterbiev, the Uzbek cut his teeth in the unpaid ranks with a long and distinguished amateur career that saw him win multiple world and international championships. With that vast reservoir of experience in his pocket, Madrimov, 26, was able to hit the ground running in the prizefighting ranks and bypass the customary early stages of knocking over palookas and journeymen. All six of his opponents were experienced gatekeepers with winning records, three of whom had over 30 fights and two with over 20 fights under their belts.

Madrimov, like Kalombo, would likely have a 100 percent knockout rate had it not been for a refereeing error in his last fight. Madrimov appeared to have knocked Eric Walker out in the 12th and final round but the referee mistakenly ruled that Walker was felled by a shoulder block rather than a punch. A dazed Walker remained on the canvas for more than 10 seconds and in the ensuing confusion, was given precious more seconds to recover and finish the fight on survival mode. Walker (20-3, 9 KOs) has never been stopped.

While Kalombo’s 14 opponents might not have the same amount of cumulative experience as Madrimov’s six, the Congolese fighter has notched up some impressive victories, including two against previously undefeated fighters. In 2018 Kalombo blasted away Samuel Antwi, who was 7-0 (4 KOs) at that time, in two rounds. Antwi has since rebounded with six wins including stoppage victories against opponents with 11-0-1 and 20-1 records, a testament to the caliber of fighter he is. In Kalombo’s eighth fight, he got off the canvas in the opening round to stop Nkuluko Mhlongo, then 20-6 (14 KOs), in the fifth round. It was Mhlongo’s only knockout loss.

While Madrimov has fought exclusively in the United States, Kalombo has not done battle beyond African shores.

Having backyard advantage, Madrimov might be pressured to not just win but to win impressively in his homecoming. But the same can be said for Kalombo, who, fighting behind enemy lines, might feel compelled to deny the judges a say in the matter by scoring a knockout.