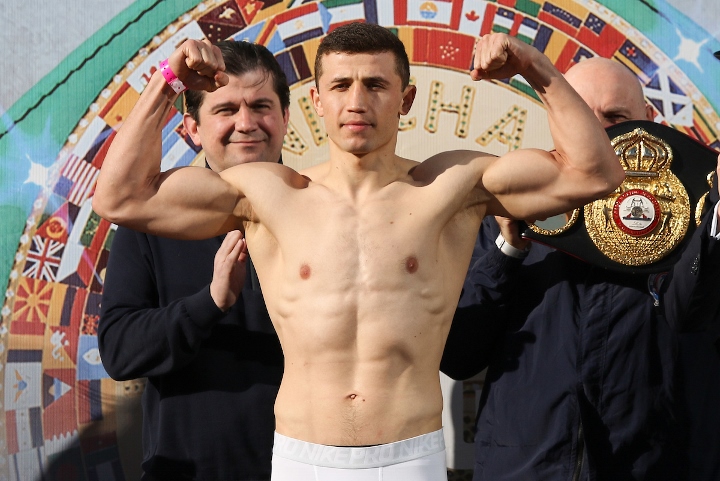 Israil Madrimov was extended the distance for the second straight time, this time outpointing Emmany Kalombo in a battle of unbeaten junior middleweights.

The fight was risky for both participants. Madrimov was coming off a shoulder surgery, while Kalombo face possible rustiness after sixteen months off the ring. The fight had a feeling of a highly probable stoppage as a combined kayo percentage of Kalombo and Madrimov was 95%.

Madrimov lunged in with limited aggression in the cautious first round, both fighters being well aware of the frightening power of each other. Taller, bigger Kalombo chose to work off his jab on Madrimov. The Uzbek was looking to land more body shots to slow Kalombo down. In the second round, Madrimov, 26, also landed a couple of right hands in the second to catch Kalombo’s attention. He didn’t forget to land his share of body blows in the second too. The Congolese tried to connect with a right uppercut against the southpaw opponent but mostly missed and hit air instead.

Round three was solid for The Dream. WBA #1 Madrimov hit Kalombo with a couple of solid right hands to put himself on notice. What was more important he started to land his jab consistently. It was just a sign of a bigger trend – Madrimov rapidly recalling his successful amateur days and displaying his vast technical arsenal. Kalombo took the punching very well but hadn’t done too much retaliation. The Congolese did better with some well-landed uppercuts in the fourth, although it was also a Madrimov’s round. The Uzbek was once again successful with his right hands.

Kalombo started the fifth as an aggressor, took several right hands to the head but then started to punch back. The result was shown on Madrimov’s face, who had his right cheek bruised. Blood was dripping down from his damaged nose. Still, the Uzbek finished the round strong, rocking the Congolese a bit at the end of it.

The African fighter sensed some flaws in Madrimov, and he tried to capitalize on them in the sixth. He marched forward more while the Uzbek chose to dance around him throwing hard shots to counter Kalombo’s aggression. The General indeed found openings in Mardimov’s not-so-tight defense and landed several uppercuts but Madrimov was in his face and countered Kalombo with hooks and uppercuts of his own. The Round had a feeling and aura of danger but both combatants took each other’s punches quite well.\

The Khiva native was his previous self in the seventh round, winging wild, awkward shots from different angles and landing some of them on Kalombo. The latter had few answers to the Uzbek’s initiative though he was cool under fire. Madrimov’s domination continued in the eighth and was punctuated at the very end of it. Both fighters threw hard left hooks simultaneously, Madrimov’s landing first and catching the COngolese a bit unbalanced. He stumbled back, and only the ropes kept him from going down, prompting referee Sergey Litumov to issue a count.

Another big left hand rocked Kalombo in the ninth, which was once again the Uzbek’s round. Kalombo looked too reserved and didn’t let his hands go. He mocked a late surge in the tenth but it wasn’t enough to do anything to Madrimov.

The Uzbek battler showed more to his game in his seventh professional outing, reviving memories of his glorious amateur past but also showing he is a work in progress. Lots to be done to tighten up his guard and to eliminate unnecessary wildness in his offense.