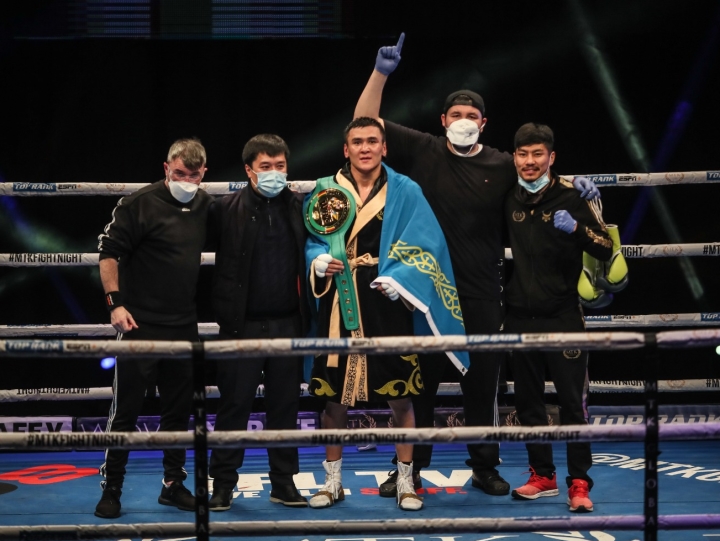 Tursynbay Kulakhmet continues his impressive assault in the early stages of his career.

The first-year pro from Kyzylorda, Kazakhstan knocked out Venezuela’s Heber Rondon in the first round of their regional junior middleweight title fight Saturday at Caesars Palace Bluewaters in Dubai, United Arab Emirates. Kulakhmet floored Rondon twice, the latter of which prompted an immediate stoppage at 1:14 of round one.

Kulakhmet has been matched aggressively since his pro debut last August. His first three opponents to date have boasted a combined record of 40-1-1 at the time of their fight, having yet to lose a round along the way.

Rondon (20-1, 13KOs) never had a chance to test the mettle of the former amateur standout, forced in retreat mode from the opening bell and for good reason. Kulakhmet immediately went on the attack out of his southpaw stance, cornering Rondon and connecting with two right hooks and a cleanup left hand as his foe was already on his way down.

The sequence appeared to be enough to end the fight as Rondon was slow to rise to his feet. Kulakhmet didn’t waste any time in closing the show, connecting with a right hook in the center of the ring, with Rondon immediately collapsing to the canvas. The fight was waved off without a count.

An ambitious push is expected through 2021, providing that proper opposition can be secured. Kalukhmet’s management suggested after the bout that “nobody wants to fight him. We want to fight everyone, we will see who answers the challenge.”