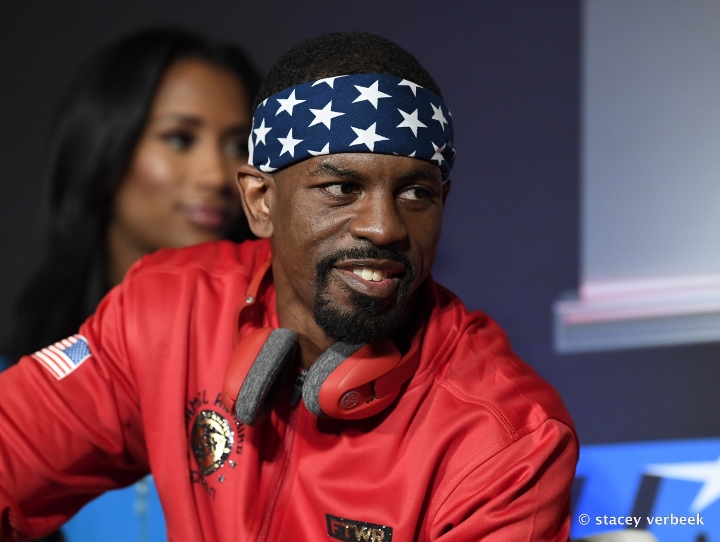 Jamel Herring is certain that his battle with COVID-19 last summer impacted his performance against Jonathan Oquendo.

Herring wasn’t particularly sharp when he opposed Oquendo on September 5. The WBO junior lightweight champion was way ahead on all three scorecards when referee Tony Weeks disqualified Oquendo following the eighth round, but Herring didn’t box as well that night as he did during his previous two victories versus Lamont Roach and Masayuki Ito.

The 35-year-old Herring’s fight with Oquendo was postponed twice due to Herring’s illness, which extended and complicated training camp. He has endured multiple postponements of his fight with Carl Frampton, too, but Herring hasn’t felt any lingering effects from COVID-19 while preparing to defend his WBO belt against the Northern Irishman on Saturday night in Dubai.

Herring (22-2, 10 KOs) discussed his COVID ordeal during an interview with IFL TV following a press conference Thursday in Dubai.

“We seen it with Alexander Povetkin, for instance,” Herring said. “COVID-19 hit him, and then look at what he did with Dillian Whyte [in a fourth-round TKO loss Saturday night]. He was not the same. I believe the same thing happened with Miguel Berchelt. And I’m not taking anything from Oscar Valdez. Oscar Valdez put on a hell of a performance, a great performance [a 10th-round knockout win February 20]. But the COVID-19 definitely takes an effect on your body, and I know it did for me. Because like [Frampton] mentioned before during the press conference, he said it himself, the Lamont Roach and Ito fights were superb. But the minute I got sick, that’s when I didn’t look, you know, quite my best.”

Cincinnati’s Herring and Puerto Rico’s Oquendo were scheduled to meet July 2 at MGM Grand Conference Center in Las Vegas. Their bout was postponed June 23 because Herring tested positive for COVID-19.

It was rescheduled for July 14, but it was postponed again July 13, the day they were supposed to weigh in, because Herring again failed a COVID-19 test.

When they finally entered the ring September 5 at MGM Grand Conference Center, Herring and Oquendo (31-7, 19 KOs) engaged in an ugly, foul-filled fight in which Weeks ruled that an intentional head-butt by Oquendo caused a cut above Herring’s right eye during the fifth round. Herring informed Weeks and a ringside physician following the eighth round that he couldn’t see out of his right eye and their scheduled 12-rounder was stopped.

Weeks disqualified Oquendo, who contended that Herring was looking for a way out of their physical fight.

Herring was ahead 80-70, 80-70 and 79-71 through eight rounds. The southpaw would’ve won a technical decision had Weeks determined that an accidental clash of heads caused Herring’s cut.

“Even though, you know, I felt like I won every round in the Oquendo fight,” Herring said, “you know, and I was fighting against a dirty fighter, but I made no excuses. I could’ve just even said, you know, ‘Why risk taking a dangerous fight with Carl Frampton if I’m gonna perform this way?’ No, I knew what the reasons was behind that fight, so that’s why we’re here now. And you guys seen it, I was even willing to still go to Belfast [Frampton’s hometown]. I was willing to go to the UK because I believed in me and I know what happened in that Oquendo fight. But it’s not gonna show up Saturday night.”