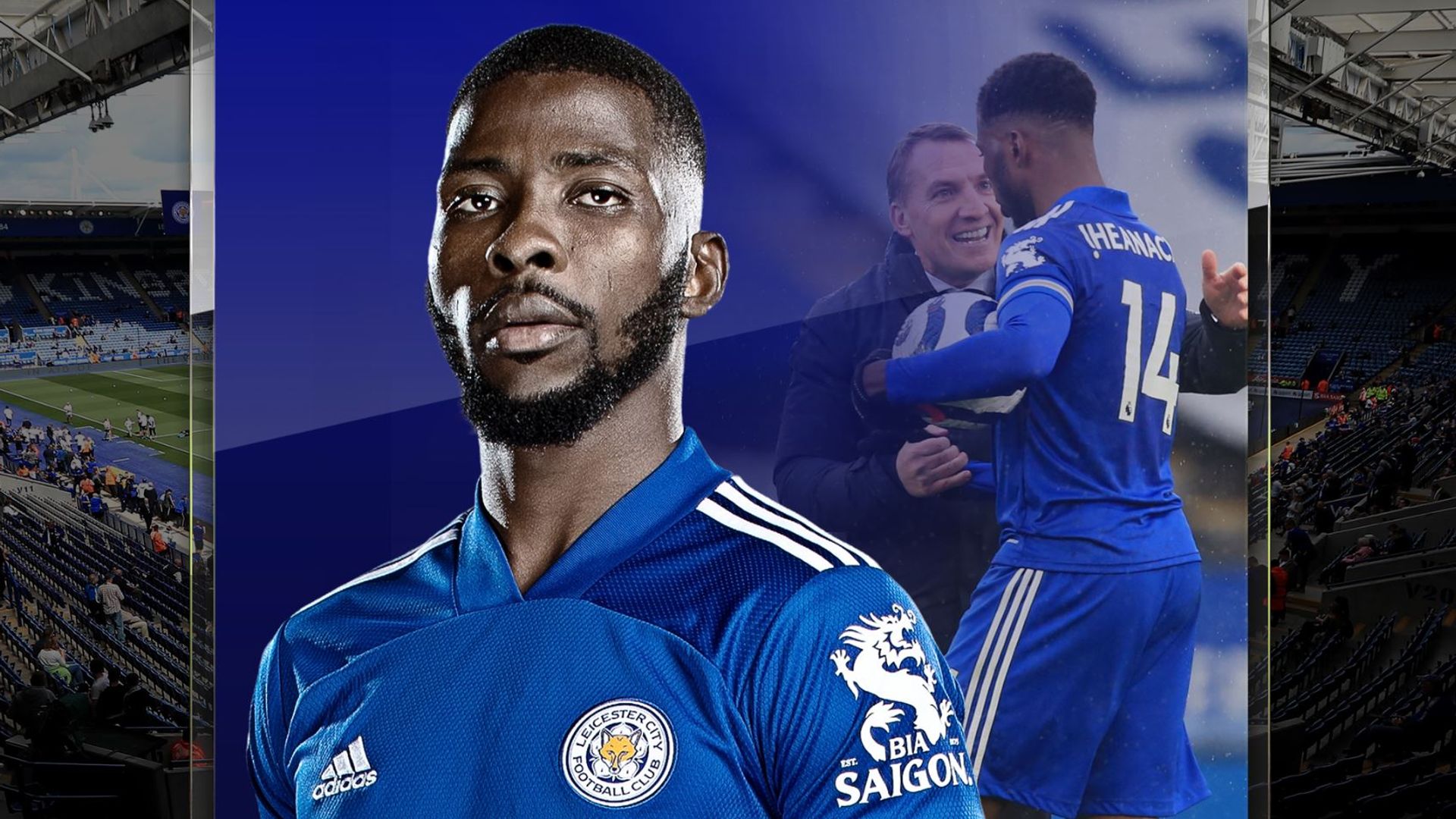 Jamie Vardy has been the scourge of Manchester City over the years, scoring a hat-trick in Leicester’s 5-2 win at the Etihad Stadium in September to take his total of goals against the Premier League leaders to 11. But there is another forward to watch out for on Saturday.

Kelechi Iheanacho will also be hoping to feature against his former club while in the form of his life. Seven goals in four games have turned his season around and reinvigorated Leicester just at the point when injuries looked like they might begin to take their toll.

Brendan Rodgers is clearly delighted. “Since he has come into the team he has just been fantastic,” he tells Sky Sports. “I am delighted for him because he is such a conscientious guy, such an honest guy, and as you can see now, a very talented player.

“If you think of his journey, he has been the young player at Manchester City after being the player of the tournament at the Under-17 World Cup. He breaks in, scores some goals, but there are gifted players ahead of him so it is difficult to get that game time.

“He then makes a move to Leicester where he has Jamie Vardy here, one of the top strikers in the Premier League. Plus, you have the adaptation of leaving Manchester City and coming to another club so that is always going to take that bit of time.

“I know when I came here that there were probably times when there were grumbles if he was playing but he has very quickly won over people. That is just through hard work, resilience and talent. What you are seeing is a young player at the top of his game.”

Iheanacho’s own satisfaction is obvious – his scream following his man-of-the-match award against Manchester United in Leicester’s FA Cup quarter-final win last time out was caught on camera. It summed up the passion that the Nigerian brings to the group.

“He is not reserved,” says Rodgers, a warm smile flashing across his face. “He is very charismatic. He genuinely comes in with a smile on his face every day. He loves his football. That is a great starting point. He is at his maximum every day. He works hard every day.

“I cannot remember him missing a day of training since I have been here. He helps our centre-backs to become better at their jobs because he is really aggressive with them.

“All the guys love him. Now what you are starting to see is all his qualities. How he receives the ball. His strength. His finishing ability. His anticipation as a striker. You are seeing all of these things now because he is playing with confidence. I am delighted for him.”

As Rodgers points out, Iheanacho’s talent was never in doubt, having been identified as one of the game’s most gifted prospects while still a teenager. Now, the potential is being realised. His strike rate this season is superior to that of the Premier League’s top forwards.

“I remember talking to Ian Rush when I was at Liverpool and him telling me that no matter how a striker is feeling, whether he is tired in the game or tired in training, when he hits the back of the net it gives him confidence, it gives him energy. I never forgot that.

“It is like any striker, if you are able to get a rhythm of games and you can gain that confidence within that rhythm then you are going to play the game to a higher level. I think it is just that continuity of games that has really helped him to improve.”

Indeed, Iheanacho’s inclusion in the starting line-up against Manchester United was his fifth consecutive start for Leicester. Remarkably, at the age of 24, that is the first time in his career that he has been selected by his club for five matches in a row.

Why has he had to wait so long?

“When he has played in a diamond structure or in a 3-1-4-2, he has always played well and combined with another striker. That is probably what he is best suited to. But I have played a lot of the time this season with one central striker and two wide forwards.”

Injuries brought opportunity. Harvey Barnes suffered an injury. James Maddison was out too. Rodgers had to find an alternative solution and a change of formation reaped rewards.

“When we lost our attacking players,” Rodgers explains, “we lost our wingers, our really creative players, and it was just a case of trying to figure out how to get the balance in the team to give us a real creative aspect while retaining defensive stability as well.

“We played a game against Arsenal and I did not like how my team played in that game. It was 4-4-2 but it was not flexible, it was not dynamic. It became all straight lines when we had our players out. I felt that I had to look at that to change the dynamic of the team.

“In the main, I am not one who has played 4-4-2. Only really with the diamond shape. So, we decided to play 3-4-1-2 and then go to 3-1-4-2. We started looking at different aspects of how they could play together and it has worked really well for us. 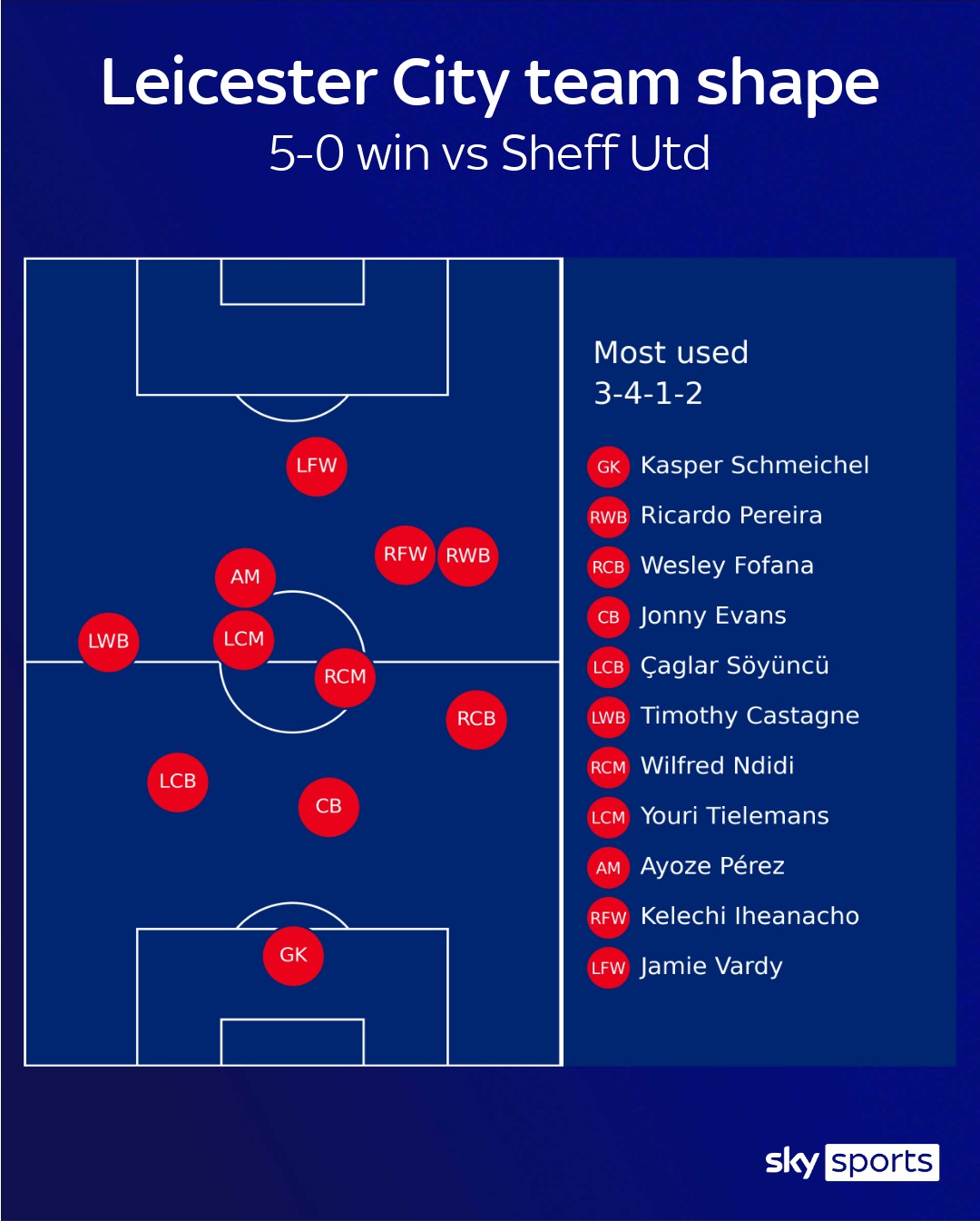 “That was because we needed to get that creativity into the team. With the players we had available it was a case of finding that balance that enabled us to do that and then giving them real clarity about their positions with and without the ball.

“It is about being open-minded. Sometimes when you are younger you see that as a compromise. It is not that. As you gain experience and wisdom, you realise there is evolution as a coach.

“What we have had to do this year because of the number of injuries we have picked up throughout is to have that flexibility. We had to find this system to remain creative and then it became a case of finding the advantages within the system. That is the game.” 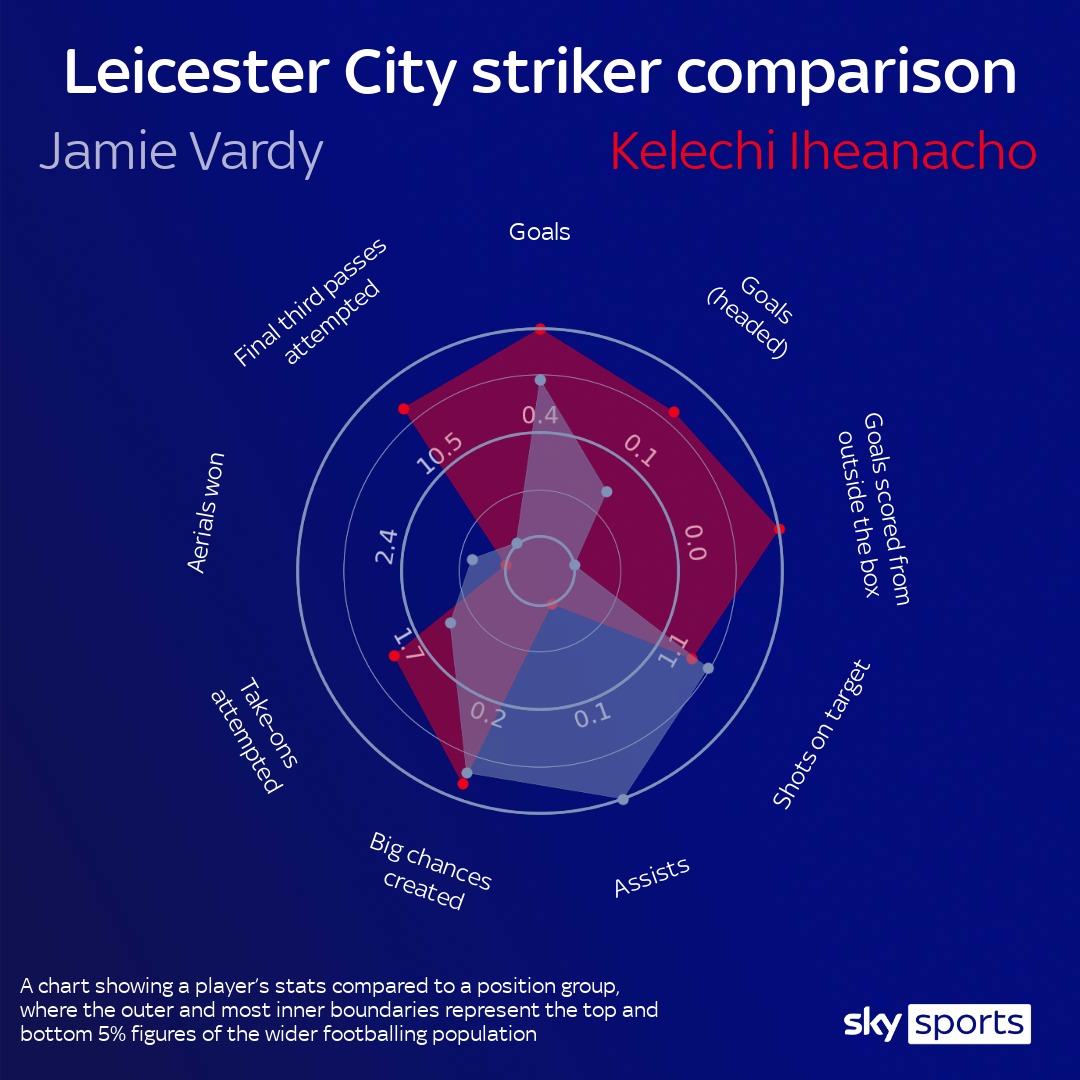 The partnership between Iheanacho and Vardy has been a revelation of late, particularly given that the pair did not start a single one of Leicester’s first 37 games of the season.

“That was purely because of the tactical idea,” says Rodgers. He quickly points out that there was a 4-1 win over Aston Villa last season in which the two worked well together. Given their very different skill-sets, there is no real reason why they cannot combine.

“The connection, the synergy, between the two is very good because they are both slightly different. Jamie likes to penetrate the back line. Kels can do that but he can also come underneath and play. In the end, you need the intelligence of the players to make it work.”

Importantly, Iheanacho was ready to seize his chance.

“When you are not playing, you might not feel that involved. But he is always ready to contribute whether that is from the start or coming on. That is important. His mindset and his attitude has allowed him to be ready when called upon to play.”

Rodgers also deserves credit for not losing a player who has been an unused substitute during his Premier League career with Leicester on more occasions than he has started.

“It is just communication. You have to communicate. That is key. Take the time in training to speak to them about certain aspects of their game, specific exercises on their finishing. Try to help them gain that confidence. I try to reinforce that, especially with Kelechi.

“Just because someone is not always playing, I still try to give respect to the player by having that communication so that it helps them to always feel a part of what you are doing. What I have always tried to acknowledge with him is his importance to the team.”

Now there is talk of a new contract and a new career trajectory. Given that he only reported back from international duty on Friday morning, perhaps the next start might not come on Saturday. But there is awareness that Kelechi Iheanacho’s best is still to come.

“No doubt,” says Rodgers. “He is not even anywhere near what you would call his asset age. That will come later in his career. He has still got so much development but I think he is enjoying his football which is important. He comes in, you see him smiling and enjoying it.

“He is one we obviously want to continue working with.”