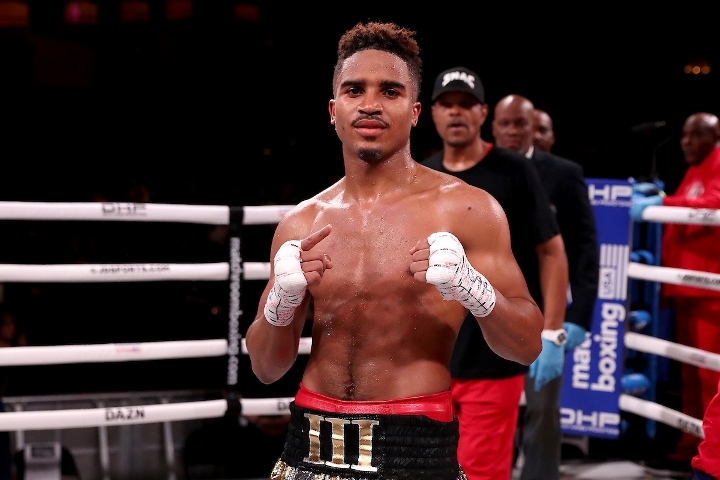 After fighting eight of his first nine fights in Tijuana, Mexico, featherweight prospect Darren Cunningham got an education few of his Stateside peers could claim.

“To be honest, it helped me out a lot,” said Cunningham, who looks to extend his perfect pro record to 13-0 this Saturday in Atlanta against Danny Flores. “To the naked eye, a lot of people would overlook it, especially if they haven’t been through that circuit. So I’m forever grateful because it definitely helped me develop as a fighter just being on the other end of everybody going against you and still coming out on top. Anybody can only imagine what that’s like.”

I imagine there were boos, maybe a bottle or two hurled toward the ring, that kind of stuff. So how was he received in Mexico? As the good guy or the bad guy?

“I’m the people’s champ,” he deadpans.

I like it, but he didn’t answer the question.

“Of course, they booed me during the fight, but after, I felt the love, so I consider that I’m the people’s champ.”

We both laugh, and fair play to the 23-year-old, who made his way from St. Louis to Las Vegas to chase a dream of making it big in the boxing world after a solid amateur career that saw him in the ring with the likes of Shakur Stevenson, Vergil Ortiz and Antonio Vargas.

“Everybody didn’t agree with it,” he said of the move out west. “But since I was young, I always knew what I wanted and I’m the type of person that if I say I’m gonna do it and put my mind to it, I’m gonna do it. They’re proud of me now, that’s one thing that I can say for sure.”

They should be, as he’s compiled a perfect pro record, has drawn rave reviews from his buddy Devin Haney, and is headlining this weekend’s card in Georgia. He even has a Madison Square Garden fight on his resume, beating Jonathan Ramos on the Haney-Abdullaev card at the MSG Theater in 2019.

“It was exciting,” he said of his first fight in the Big Apple. “The walk alone gave me chills, so it was big for me and my career. It was a lot different, but I’m a guy that makes necessary adjustments on the fly, so it came second nature to me.”

From Tijuana to the Mecca of Boxing, Cunningham has seen a lot thus far in his young career, but that’s only going to help him as the stakes get higher, so he doesn’t question the journey thus far.

“Everything happened for a reason,” he said. “If it didn’t happen, I wouldn’t be in the position that I’m in now. I come from fighting at local bars in Tijuana, fighting at the Garden in the first fight and now to headlining my own card in Atlanta. The sky’s the limit.”

That’s the word out in Vegas, and yes, he’s shown obvious talent, even if his level of opposition has been less than stellar. But he is still young, and should he pick up another win this weekend in his first bout since a November victory over Juan Gabriel Medina, a step-up fight will be in order. In the meantime, he’s staying patient.

“Along with having patience, I can’t become frustrated because patience and frustration doesn’t run on the same street,” said Cunningham. “I just have to wait my turn and keep developing as a fighter. When the time presents itself, I will be more than ready to dominate the competition. As I can see, a lot of the time, these guys are competing with one another. I don’t want to compete with them; I want to dominate, so I’m gonna put my body through the necessary training to keep developing as an all-around, seasoned fighter.”

Wise words from a young man about to hit the fast lane in a career he’s been planning out since he was a kid.

“I call it the ‘it’ factor,” he said. “You either have it or you don’t. When I was a kid, eight years old, I always thought that I was bigger than what I was, and I was probably four-foot-five.”

He laughs, now five-foot-six and ready to take on the world.