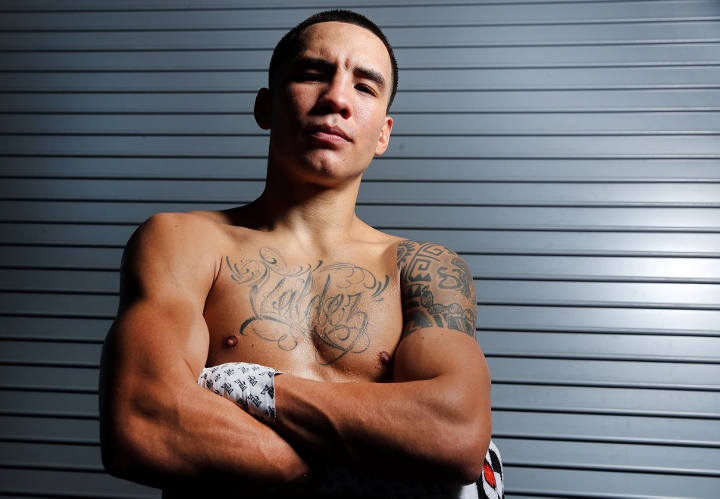 As much as Oscar Valdez wants to silence Shakur Stevenson, he also is motivated to capitalize financially on his career-changing victory over Miguel Berchelt as much as possible.

That’s why he would just as soon embrace bouts with Vasiliy Lomachenko and Gervonta Davis if those opportunities became available. Lomachenko, like Valdez and Stevenson, is promoted by Bob Arum’s Top Rank Inc.

Valdez addressed the possibility of facing Lomachenko during a recent episode of “Max On Boxing,” Max Kellerman’s weekly show on ESPN2.

“Definitely,” Valdez replied regarding a Lomachenko fight. “You know, at the end of the day, fighting is what puts food on the table for my family. And, you know, we want the bigger and better fights. I would love a fight with Lomachenko. I would love a fight with Lomachenko or Gervonta Davis or the winner of [Carl] Frampton and Jamel Herring. The fights that [pay] more money, you know, those are the fights I would wanna have. But also, fights that people wanna see.

“You know, I don’t wanna fight somebody for the money, and then get criticized later in my career, saying that I’m ducking fighters or that I’m scared of fighting certain fighters. I’m not scared of fighting nobody, but I would wanna get the money fights because, like I repeat, at the end of the day, that’s what puts food on the table for my family.”

Ukraine’s Lomachenko (14-2, 10 KOs) owned the WBO junior lightweight before he moved up to the lightweight division three years ago. The three-division champion is open, according to Arum, to returning to the 130-pound division for the right fight now that he has lost his lightweight titles to unbeaten, unified champ Teofimo Lopez.

Fighting the winner between Herring and Frampton is realistic for Valdez (29-0, 23 KOs) as well, primarily because Top Rank is Herring’s promoter and Frampton’s co-promoter. Cincinnati’s Herring (22-2, 10 KOs) will make an optional defense of his WBO junior lightweight crown against Belfast’s Frampton (28-2, 16 KOs) on April 3 at Caesars Bluewaters Dubai in Dubai.

A Valdez-Davis fight would be more difficult to put together because Baltimore’s Davis (24-0, 23 KOs) is promoted by Floyd Mayweather’s company and advised by Al Haymon.

Stevenson, meanwhile, is expected to become the WBC’s number one-ranked challenger for Valdez’s super featherweight title when its newest ratings are released. Valdez told Stevenson (15-0, 8 KOs) at ringside following his telegenic, 10th-round knockout of Berchelt (38-2, 34 KOs) on February 20 in Las Vegas that he would gladly fight the undefeated southpaw who has repeatedly claimed Valdez vacated his WBO featherweight title in 2019 to avoid him.