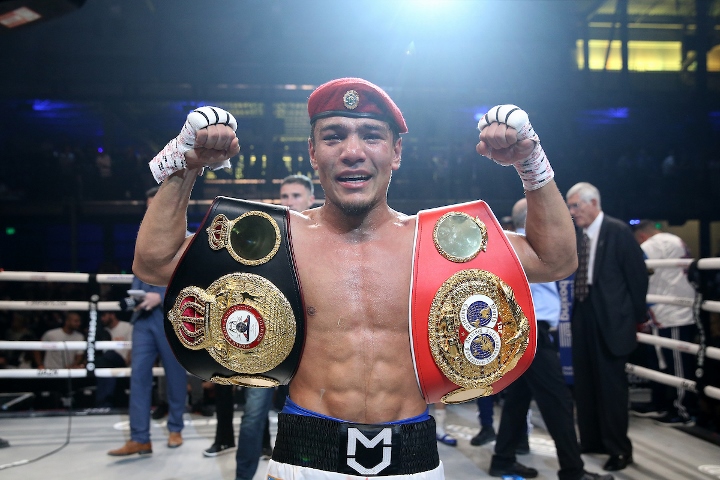 It’s not always easy to identify the beginning of something in boxing. As pieces come together in a weight class, or the span of a couple of classes, what appears tantalizing can evaporate rapidly.

This Saturday on DAZN (10 AM EST), two of the best Jr. featherweights in the world will lock horns for two of the major alphabet straps available. After suffering COVID delays with so many since this time last year, 26-year old Murodjon Akhmadaliev (8-0, 6 KO) gets the chance to make his first defense of the WBA and IBF belts he won in January 2020.

Akhmadaliev slugged his way to a split decision over a game Daniel Roman in one of the better fights of the abbreviated year. The quick professional ascension for the 2016 Olympic bronze medalist and 2015 World silver medalist yielded gold. 31-year old Ryosuke Iwasa (27-3, 17 KO) awaits this weekend with a chance to regain the IBF belt he lost in 2018.

Akhmadaliev should be considered the favorite and his learning curve suggests the best is yet to come. It’s one of several developments at Jr. featherweight that bear watching. There’s a big picture coming into focus. It’s a picture that could expand vividly in the next few years.

It might be the most intriguing picture at 122 lbs. since the class exploded in 1996.

A look at the April 1997 year-end issue of Ring Magazine gives us a glimpse at a Jr. featherweight top ten worth remembering:

Every name isn’t etched significantly in history but it was quite an assortment of young and veteran talent as 1996 came to a close. Zaragoza, Barrera, Morales, and Canizales are all in the International Boxing Hall of Fame. Bungu is on the ballot. Jones has a case to at least merit a vote.

What makes 1996 significant? There were certainly other events preceding the year that mattered around the featherweight region of the scale. HBO’s investment in Kevin Kelley and Bungu’s upset of McKinney in their first of two fights both occurred earlier.

1996 stands out because of the way so many pieces gelled. Barrera-McKinney debuted the Boxing After Dark concept on HBO in an all-time classic in February. The following month, Jones defeated once record setting bantamweight titlist Canizales, regaining momentum Jones lost after some stunning losses at 118 lbs. Erik Morales was making waves on ESPN, his first title win over Zaragoza just a handful of fights away. Before the year was out, Jones would upset Barrera and a wild round robin was begun.

The combination of Barrera, Morales, Jones, and McKinney would combine for six fights between 1996 and 2000 with Barrera and Morales adding two more at featherweight and Jr. lightweight in the following decade. Along the way as Barrera and Morales moved through the scale, Naseem Hamed, Juan Manuel Marquez, and Manny Pacquiao among others would work into the rotation. Morales and Marquez wound up with belts at Jr. welterweight and Pacquiao copped gold two divisions further. Jr. featherweight continued to reload deep into the 00’s with names like Oscar Larios, Israel Vazquez, and Rafael Marquez.

By no means is this a comparison of talents currently at Jr. featherweight to what came before. It would sound as outlandish now as suggesting Barrera belonged in the ring with the fearsome Wilfredo Gomez would have sounded at the end of 1996.

Barrera-Gomez in 2021 doesn’t sound outlandish at all. Now, it’s an all-time fantasy fight. Time adds color, context, and accomplishment. It replaces what we couldn’t know yet with everything that followed.

Along with Akhmadaliev, the current title picture at Jr. featherweight includes 26-year old WBO titlist Stephen Fulton (19-0, 8 KO) and 26-year old WBC titlist Luis Nery (31-0, 24 KO). Fulton is coming off an eye-opening, exciting, and complete title winning performance via decision over Angelo Leo earlier this year. Nery, the former bantamweight champion, has been up and down in the ring since a pair of controversial knockouts of Shinsuke Yamanaka that featured a failed drug test in the first fight and grossly missed weight in the second but he remains a notable talent with real power.

Along with the three beltholders, Leo remains formidable, Roman is looking for another title shot, and undefeated fan friendly battlers like Ra’eese Aleem and Brandon Figueroa are land mines in waiting. Adding flavor to the mix is what rests four pounds away on either side of the class with bantamweight Naoya Inoue and featherweights Gary Russell and Emannuel Navarrette as potential foes for anyone named.

Whether it happens sooner, or later, twenty-five years removed there is an unmistakable spirit of 1996 in the air. Something is happening, something good, something young, at Jr. featherweight. There is a depth of combustible elements right now that can’t help but blow.

We won’t know for years who among them, if any, will add their name to the roster of greats with a Barrera or Morales but odds are one or two of this crop might do just that. Saturday is as good a time as any for a boxing fan who hasn’t bitten into the action just yet to say they still got to the show early.