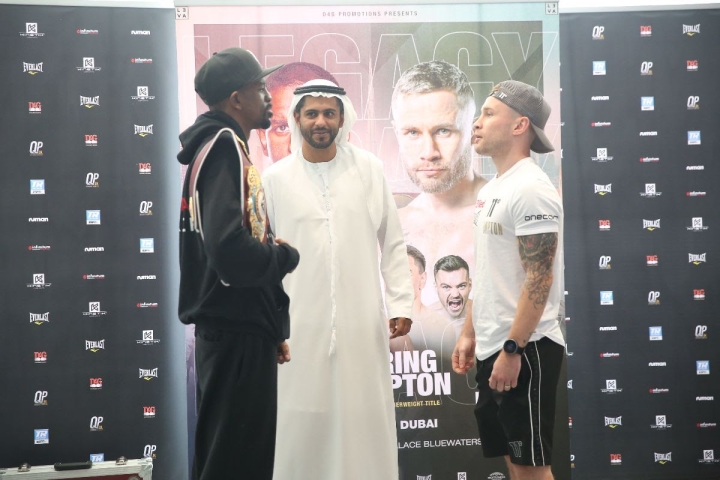 Carl Frampton still remembers the feeling of becoming the first fighter ever from Belfast to win titles in two weight divisions.

More than a year after agreeing to terms for a showdown with Jamel Herring, the sense of being able to add to his legacy has once again come to the forefront.

In addition to Northern Ireland’s only-ever double-weight champion, Frampton is joined by Steve Collins and Katie Taylor as the only fighters from anywhere in Ireland to accomplish the feat. None have done so in three weight divisions, a status that the 33-year-old hopes to change when he challenges for Herring’s WBO junior lightweight title on Saturday.

“Personally, it would mean the world to me,” Frampton said during the final pre-fight press conference ahead of this weekend’s show, which airs live on ESPN+ (Saturday, 4:00 p.m. ET) from Caesars Palace in Dubai. “Not just to me but to the people who have helped me ever since I was a kid, seven years old. Loads of people that I have to thank for shaping me in some way or form.”

Frampton (28-2, 16KOs) established himself as the class of the junior featherweight and featherweight title reigns. A win over longtime bitter rival Scott Quigg in their Feb. 2016 clash of unbeaten 122-pound titlists ignited what would serve as a time capsule year for the Belfast native. The fight with Quigg would be his last at junior featherweight, moving up to featherweight later that July where he would defeat then-unbeaten WBA titlist Leo Santa Cruz.

The pair of wins resonated with the boxing industry, hailing Frampton as the 2016 Fighter of the Year. It represents the pinnacle of his career, as he would surrender the title to Santa Cruz in their Jan. 2017 rematch while coming up short in a Dec. 2018 featherweight title bid versus then-unbeaten IBF champ Josh Warrington.

Framtpon has since added two wins, both coming above the featherweight limit with the intention of challenging for a third crown. A clash with Herring was due to take place last June in Belfast, only for the pandemic to delay the event which since seen additional postponements before landing on April 3 in Dubai.

Herring (22-2, 10KOs) attempts the third defense of the title he claimed in a May 2019 unanimous decision win over Japan’s Masayuki Ito. The proud U.S. Marine and 2012 U.S. Olympic boxing team captain has every intention of bringing the belt back to the states, while his challenger is keen on making history.

“The only ever three-division world champion from the whole island of Ireland and only a handful of British fighters to ever do it as well—you join an elite bunch of global fighters to do that,” notes Frampton. “I want to do that. I’m so determined to do that and it would mean the world to me.”