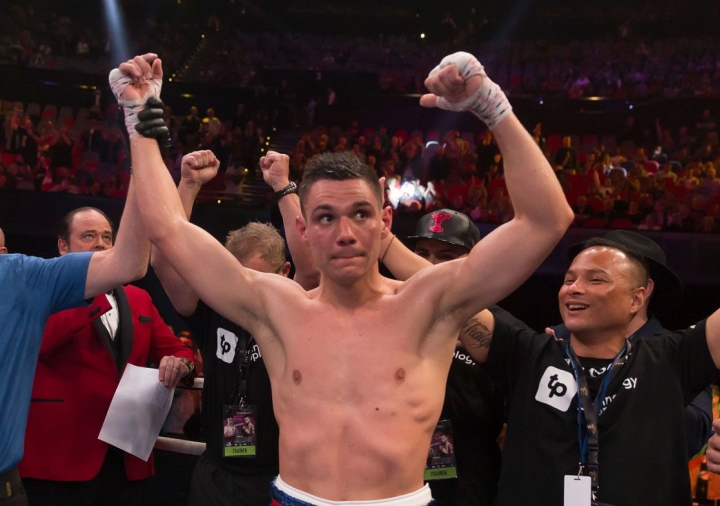 Tim Tszyu continues to carve out his own reputation in the sport.

Tszyu floored Hogan early in the frame, continuing on the attack before Hogan’s corner literally threw in the towel with roughly 0:30 to go in round five.

Tszyu nearly closed the show late in round three. Hogan was already showing signs of fatigue, further aided by crushing left hooks to the body by Tszyu who had his countryman in retreat toward the end of the frame.

A similar sequence transpired down the stretch in round four. Tszyu launched a two-fisted attack, connecting with right hands and left hooks upstairs as Hogan could do little more than hold in order to slow down the onslaught. Tszyu pinned Hogan along the ropes in the final 0:30 of the round, though with the trasnpanted

Tszyu improves to 18-0 (14KOs), strengthening his claim as a premier junior middleweight contender. Wednesday’s win also further established his star power back home, playing to a third straight sizeable crowd since the pandemic with the venue completely sold out at full capacity.

A title shot could be in his near future even if not next out the gate. Currently being explored is an undisputed showdown between lineal/WBC/WBA/IBF champ Jermell Charlo (34-1, 18KOs) and unbeaten Brian Castaño (17-0-1, 12KOs), though an IBF mandatory title defense could serve as a disruptor.

Such a course of action would be the best laid route for Tszyu, who remains the number-one contender in the WBO rankings though not yet officially named as the mandatory challenger. Time remains on his side, as the 26-year-old is just now entering his prime.