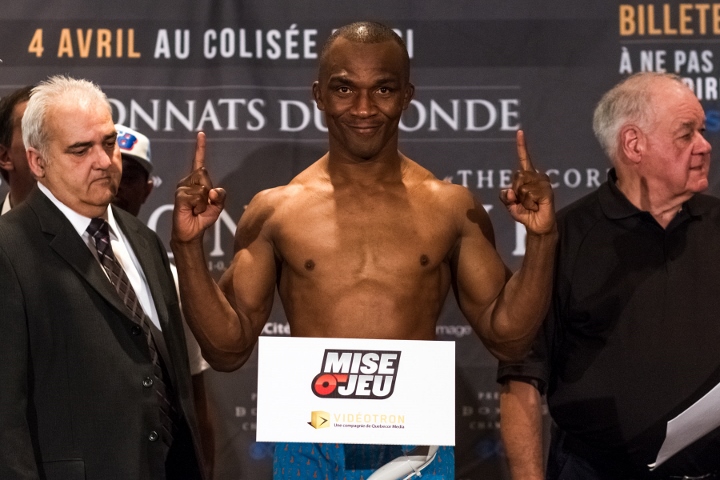 Sakio Bika came out of retirement to settle the score with his oldest ring rival.

The pace of the eight-round rubber match was precisely what you’d expect between a pair of 40-something boxers fighting well past their best days. Soliman, 47, was deliberate in his approach out the gate, fighting with a protective brace over his right knee and never truly finding his rhythm.

Bika, 41, was content with being able to throw one punch without having to worry about much coming back in return. The former super middleweight titlist shot his jab and occasionally followed with chopping right hands, a pattern which was enough to control the action through three rounds.

Soliman briefly turned the tide in round four, able to work his way inside while Bika’s punch output declined. It held up only until the next frame, as did his skin as a clash of heads left Soliman with a deep cut over his left eye. It wasn’t severe enough to stop the fight, though was enough for Bika to regain his bearings and resume control.

Bika had Soliman in trouble throughout the final 90 seconds of round seven. A flush right hand caught Soliman clean on the chin, leaving the former middleweight titlist on wobbly legs. Bika continued to apply heavy pressure, landing another right hand along the ropes and peppering Soliman with combinations though unable to close the show.

Soliman came out bloody and unsteady for the eighth and final round, gasping for air as Bika was methodical in his attack before unloading down the stretch. A left hook had Soliman in trouble, with Bika landing several more heavy blows but falling just short on the ones that could truly end the fight.

Bika instead settled for a lopsided win to go up 2-1 in their 18-plus year rivalry. The win advances his record to 35-7-2 (22KOs), having won his last three starts. The previous occasion came in Oct. 2017, ending his retirement for the sake of getting in the ring with his old rival.

The rematch comes more than 13 years after the two met in the semifinal round of The Contender season two in Los Angeles, where Bika scored an eight-round decision in a far more competitive affair and much closer to their respective primes. Bika went on to win the boxing reality series while also avenging a defeat to Soliman from five years prior.

Soliman falls to 46-15-1 (19KOs), ending a three-fight unbeaten streak. The fight was his first since April 2019 and hopefully the final call in a career dating back to 1997. The Melbourne native won the IBF middleweight title in a May 2014 rematch with Felix Sturm, the reign lasting less than five months before conceding the crown to Jermain Taylor in Oct. 2014.

Bika claimed the WBC super middleweight title in June 2013, winning the belt in his fourth attempt after having previously fallen short to Joe Calzaghe and twice to countryman Anthony Mundine. His reign lasted 13 months, fighting Anthony Dirrell to a draw before losing the belt via 12-round decision in their Aug. 2014 rematch.

Opening the five-fight Pay-Per-View telecast, Cesar Mateo Tapia scored a repeat win over Renold Quinlan, this time getting the job done inside of four rounds.

The bout was far more of a mismatch than their first fight in Aug. 2019, which wasn’t really that competitive. Tapia—a 22-year old Mexican prospect now based out of Narrabean, Australia—was in full control, dropping Quinlan (12-8, 8KOs) in round four and forcing the stoppage moments later. Tapia (13-0, 8KOs) won their first fight by unanimous decision.