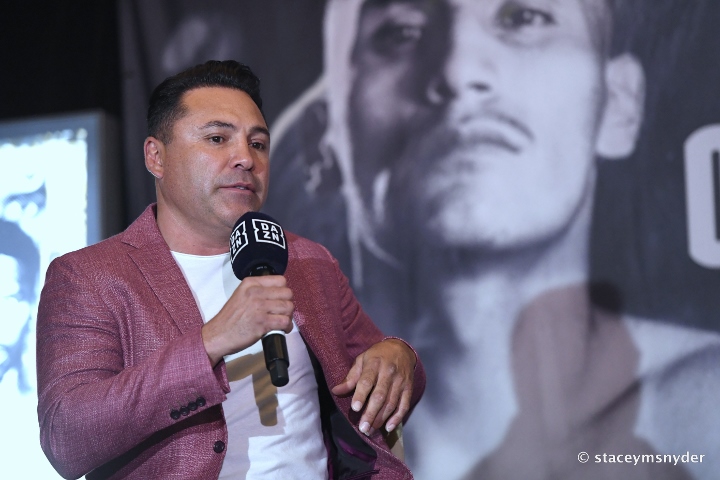 De La Hoya, 48-years-old, has been out of the ring since 2008 – when he was battered and stopped by Manny Pacquiao.

Last week, during a press conference for the Jake Paul vs. Ben Askren pay-per-view, the six division world champion announced his return to ring.

De La Hoya is going to return on July 3, with the Triller app financially backing the pay-per-view event.

Back in November, Triller was behind the Mike Tyson vs. Roy Jones pay-per-view – which generated 1.6 million purchases. They are also behind next month’s Paul vs. Askren pay-per-view.

Triller executive, Ryan Kavanaugh, told ESPN that De La Hoya could potentially face a ‘big name’ from the UFC in a boxing match.

However, White recently advised press members that he’s not going to allow any of his fighters to take part in the contest.

“To box De La Hoya? Come on guys, this sh– is getting silly. You guys just want to ask me silly questions. You have got a 50-year-old guy f—ing boxing, and you guys are actually talking about it and covering press conferences? Come on, come on you guys,” White said.

Last year, White was also critical of Tyson’s return to the ring.

The 54-year-old, who considers White a good friend, was very upset with his statements.

White would later retract his comments.

“Somebody asked me at a press conference about it and I said ‘I don’t like it, I don’t want them to do it, this and that…’ Then he called me and was like: ‘Listen man, we’ve been friends for a long time but I’m a grown ass man, if I wanna fight I’m gonna f—ing fight! Don’t be f—ing negative about my fight.’ And I said ‘you know what, you’re right. You won’t hear a f—ing peep out of me again.’ Then when I watched the fight I thought he looked really f—ing good,” White said.