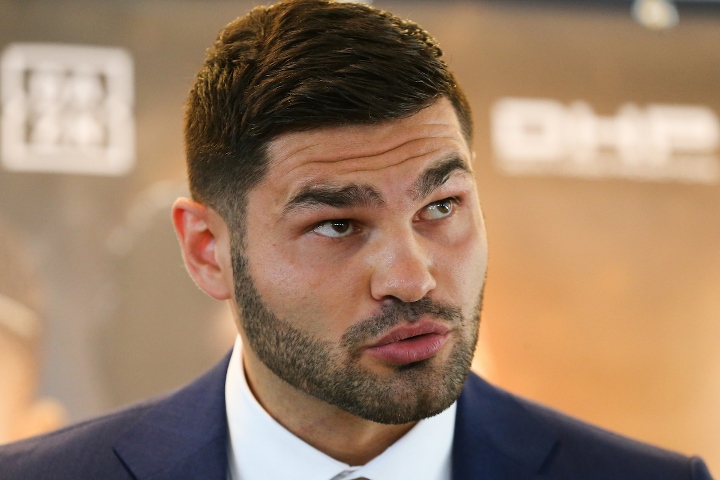 A fight to determine the next leading heavyweight contender is officially on the auction block.

The long-ago ordered IBF title eliminator between Michael Hunter II and Filip Hrgovic is now the subject of a purse bid hearing. A session has been scheduled for April 6, to take place via Zoom conference call and conducted from IBF headquarters in Springfield, New Jersey, sanctioning body representatives confirmed to BoxingScene.com on Tuesday.

The purse bid hearing is open to all IBF-registered promoters, with participants required to submit a non-refundable $5,000 sanctioning body fee. The winning bid must be accompanied by a non-refundable sum of 10% of the total amount, per IBF purse bid rules.

As the higher-ranked challenger, Hunter is entitled to the favorable end of a 60/40 split of the winning purse bid amount. Hunter (19-1-1, 13KOs)—a second-generation boxer from Las Vegas whose late father Mike ‘The Bounty’ Hunter was a mid-level contender in the 1980s and 1990s—is ranked number-four by the IBF. Croatia’s Hrgovic (12-0, 10KOs)—a 2016 Olympic Bronze medalist—is currently ranked number-five.

The title eliminator was ordered on Feb. 23, with Hunter and Hrgovic assigned to fight each other as the highest-ranked available heavyweight contenders.

Former IBF heavyweight titlist Charles Martin (28-2-1, 25KOs) was granted first dibs as the number-two contender, though ruled ineligible to participate due to a reported injury.

A fight between Hunter and Hrgovic will determine the IBF mandatory challenger for England’s Joshua, who still awaits marching orders for a long-rumored undisputed heavyweight championship clash with countryman and lineal/WBC champ Tyson Fury (30-0-1, 21KOs).

Hunter and Hrgovic are both coming off of knockout wins late in 2020. Hrgovic halted Detroit’s Rydell Booker inside of five round last November in Hollywood, Florida to pick up his fifth consecutive stoppage win. Hunter disposed of Shawn Loughery inside of four rounds last December in Galveston, Texas, marking his first fight since a 12-round draw with Alexander Povetkin in Dec. 2019.

With the fight officially ordered, neither boxer can accept an interim fight. A deal can still be reached prior to the official purse bid hearing, although little movement in more than a month suggests an unlikely scenario. Should either side fail to comply with the terms of the purse bid, said boxer will be demoted to a spot outside of the Top 10 in the IBF rankings and thus ineligible to compete in an IBF-sanctioned bout for a minimum of six month.