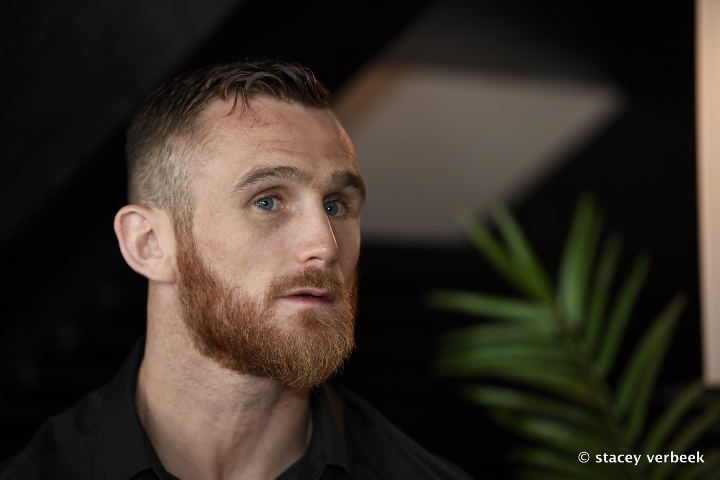 A battle over sponsorship looms over a mid-week clash Down Under.

Former two-time title challenger Dennis Hogan is threatening to withdraw from his highly anticipated domestic showdown with unbeaten Tim Tszyu, due to a dispute over his chosen sponsor for the event. The two are due to collide this Wednesday in front of an anticipated sold-out crowd at Newcastle Entertainment Centre in Newcastle, Australia.

Hogan’s position has dramatically changed after being asked by event promoter No Limit Boxing to remove an article of clothing displaying sportsbook PointsBet. The brand is viewed as a competitor with SportsBet, the show’s preferred gambling partner—and is now a sticking point in whether the main event will proceed as planned.

“They’ve basically tried to pull money from me, pull money from my family,” Hogan claimed, according to a report from Australia’s Daily Telegraph. “It’s not good, My sponsors put bread on the table for my family.”

The drama unfolded during Monday’s final pre-fight press conference, with Hogan arriving in a PointsBet-branded T-shirt. No Limit Boxing head Matt Rose informed the Irish-bred, Australia-based boxer to change his shirt —to which he obliged.

The concern now is whether he will be as accommodating for the pre-fight weigh-in and—most importantly—on fight night. Hogan has publicly declared that the sports betting site will be prominently displayed on his fight trunks. Those who are running the promotion feel otherwise.

“[Monday], we’ve been respectful, that’s it,” noted Rose, who is standing his ground on not allowing any participants to brand sponsorship conflicting with the event. “[T]hey’ve told me if that is the case they won’t come out. But we won’t be bowing to that. I actually think it’s disrespectful from the Hogan team.

“We’ve got a lot of good people helping us put on these shows and you can’t just go and grab a competitor as your sponsor because you feel like it. So, Dennis Hogan won’t be wearing those trunks to the ring. That’s it.”

If that’s the case, Wednesday’s junior middleweight crossroads bout is officially in trouble.

Hogan (28-3-1, 7KOs) has not fought since suffering a 7th round knockout loss to unbeaten middleweight titlist Jermall Charlo in Dec. 2019. The defeat was his second straight, having dropped a highly questionable 12-round majority decision to then-junior middleweight titlist Jaime Munguia in an April 2019 clash most felt Hogan deserved to win.

Wednesday’s bout—should it still go through as planned—will be the first in country for Hogan since Dec. 2018, when he scored a 12-round win over Jaime Weetch in South Brisbane. The 32-year old from Queensland by way of Kildare, Ireland remains a formidable contender at junior middleweight, along with a stiff test for his unbeaten opponent.

Tszyu (17-0, 13KOs) has not had much at all to say on the sponsorship controversy. The second-generation boxer—whose father Kostya Tszyu is a Hall of Fame former junior welterweight champion—remains focused on Wednesday’s fight, his third since the pandemic.

Tsyzu—a 26-year-old Sydney native—picked up a pair of high-profile knockout wins in 2020, most notably an 8th round stoppage of former welterweight titlist Jeff Horn last August. Their well-publicized event was one of the first during the global health crisis to take place with fans in attendance at Queensland Country Bank Stadium in Townsville, Australia. A raucous crowd was also on hand for Tszyu’s 1st round knockout of Bowyn Morgan last December at Bankwest Stadium in Parramatta, Australia.

The card on Wednesday figures to eclipse both events, though of course dependent on the headlining act holding shape.

“I didn’t get emotional about it [on Monday], but I have PointsBet across the front band of my shorts and I will be wearing them into the fight on Wednesday,” insists Hogan. “There’s nothing they can do about that.