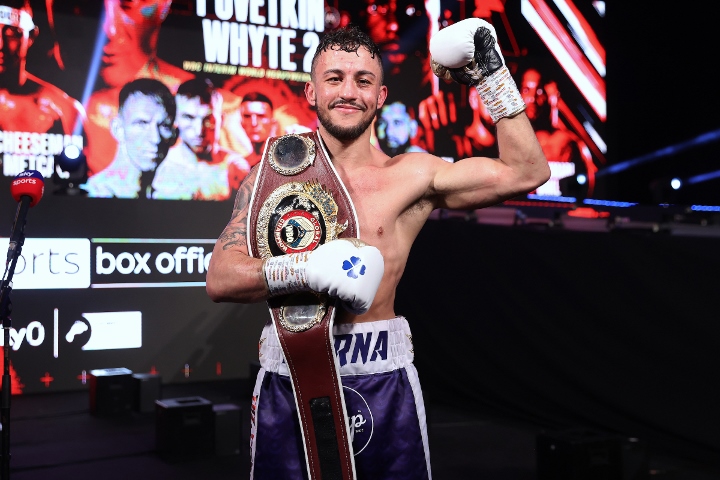 Gibraltar – Michael McKinson claimed a breakout victory over Chris Kongo as he floored his British Welterweight rival to seal a unanimous decision and move to 20-0.

The Portsmouth southpaw stunned Bermondsey’s Kongo with an aggressive start and edged a closely-contested encounter to secure the WBO Global Title with scores of 97-93, 96-94, 95-94.

“I feel on top of the word,” said McKinson. “I’ve done things the hard way in my career. For many years I’ve been calling for my shot on the big stage and I never thought it would happen. I’ve been beating people for hardly anything to work my record up to 20-0.

“Fair play to Chris, Dillian and Eddie for giving me the opportunity. I didn’t think it was ever going to happen. A big shout out to my management team MTK Global and Lee Eaton for securing me this. I believe that my career starts tonight. There was a lot of people in the boxing world that didn’t have me down as the favourite. All of my mates have made money tonight! I’m happy. I’m bringing this belt back to Portsmouth.

“In the week we’ve had a lot of hype around this fight. Everyone has been talking about it. I know he’s a respectful lad deep down, and so am I. But it did get a bit heated and everyone was questioning if it was going to live up to the hype. I think it was a bit boring, but I did what I had to do to win. Great champions do what they have to do to win and I did that tonight.

“I hope Eddie can give me the opportunities; its winner stays on. I just hope I can get on one of these shows again. Like I said in all of my interviews before, Chris is the most dangerous Welterweight out there I the UK I believe but he has his weaknesses. I believe in myself. I’ve got a great team around me. I’ve given my life to this sport and it’s paid off tonight.

“I believe I’m top of the tree. There’s a lot of talk. I’ve got respect for all of the other Welterweights. Josh Kelly, Conor Benn and Florian Marku. It’s a great time to be a Welterweight domestically at the moment. I deserve the Conor Benn fight more than any other domestic fighter.”