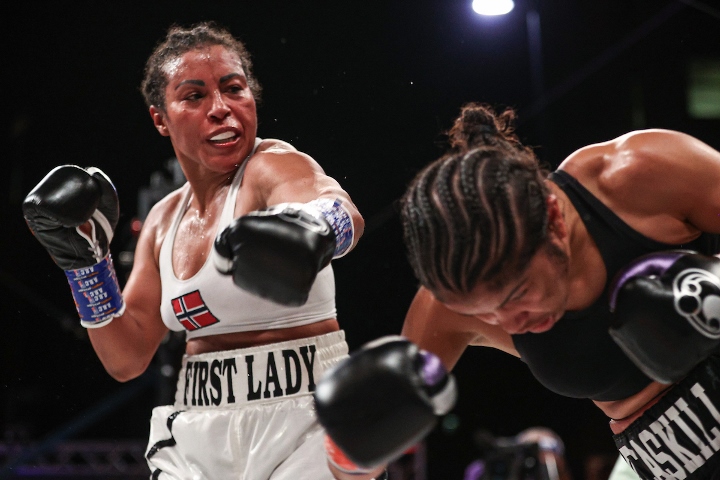 Jessica McCaskill’s championship belts were sprawled across the stage Thursday in Dallas.

McCaskill won five of those titles from Cecilia Braekhus on August 15, when McCaskill became the first fighter to defeat the long-reigning women’s welterweight champion. Braekhus still didn’t give McCaskill much credit during a press conference to promote their immediate rematch Saturday night.

“I should definitely not be losing [to McCaskill],” Braekhus said. “She was [fighting at] home. She was in her home country. All the judges [were American]. She got her catch weight [145 pounds]. And still, I beat her in one of my, what can I say, in a fight when I didn’t perform at my top. So now, Saturday I will be at my best, and she’s nowhere near my level.”

By that point Thursday, McCaskill had heard enough from the 39-year-old Braekhus, who had held two of her welterweight titles for 11 years.

“I’m so ready to punch Cecilia in the face,” McCaskill said. “I mean, like we said before, I don’t know Cecilia and there’s no bad blood. But we want this for boxing so bad. It’s gonna be the best fight of the night.”

That was a bold prediction, considering that most boxing fans and experts expect the main event – a super flyweight title unification bout between Mexico’s Juan Francisco Estrada (41-3, 28 KOs) and Nicaragua’s Roman “Chocolatito” Gonzalez (50-2, 41 KOs) – to provide fantastic action and become a “Fight of the Year” candidate. McCaskill can’t wait, however, to prove that her 10-round, majority-decision victory over Braekhus wasn’t a fluke.

“I always have to work for everything that we have, and we don’t mind doing that,” McCaskill said. “You know, we’ve come from places a lot harder than what you see us in now. And yeah, I wanna seal the deal and solidify my win in August, and let everybody know that wasn’t an accident, and that was definitely me, unified, undisputed world champion.”

The Colombian-born, Norway-based Braekhus (36-1, 9 KOs) went off as an 8-1 favorite versus McCaskill almost seven months ago in Tulsa, Oklahoma. She also was boxing’s longest-reigning champion and attempted to break Joe Louis’ longstanding record of consecutive title defenses within the same division (25).

Chicago’s McCaskill was much more active than the former champion, though, and won on two scorecards. Judge Karen Holderfield scored their closely contested bout a draw (95-95), but she was overruled by judges David Sutherland (97-93) and Gerald Ritter (97-94).

Braekhus landed one more punch overall than McCaskill, according to CompuBox’s unofficial statistics (85-of-269 to 84-of-499). The judges still favored McCaskill’s activity and aggression.

“I had a rough training camp the last time,” Braekhus said. “I was stuck six months in Big Bear [from the beginning of the COVID-19 pandemic until fight week]. Now I had a, you know, a normal training camp, and I have to do what I always do. I have to box and also, I can do whatever. I think I can stop her, too, because I’m definitely bigger and stronger than her, and I’m a much better fighter, boxer. … I’m much better in technical [boxing] than her, and I’m also stronger, so I’m very confident getting into this fight. And like I said, she’s provided me with a lot of motivation in camp.”

Braekhus contended Thursday that McCaskill (9-2, 3 KOs) has talked so much trash since upsetting her because McCaskill knows she didn’t deserve to win the IBF, IBO, WBA, WBC and WBO 147-pound championships from her.

“She was so friendly,” Braekhus said. “Then she got the belts, and she was like, ‘Wo!’ She [went] crazy. But no, I mean, it’s definitely a new situation. You know, it’s fine for me. I just wanna get the belts back. And McCaskill has kept me, you know, I’m very motivated. She’s kept me motivated through my whole camp and all this trash talk, you know, last time, you know, she knows she was lucky, so I think that’s where all the trash talk is coming from.”

The 36-year-old McCaskill, who won the WBA and WBC 140-pound crowns before she beat Braekhus, has lost only to undisputed lightweight champion Katie Taylor (17-0, 6 KOs) in her past nine fights. She promised to make Braekhus retire after defeating her a second time in a rematch DAZN will stream from American Airlines Center in Dallas (8 p.m. ET).

“We’ve always had a large amount of confidence and we’ve just had to, you know, get those opportunities to show everybody else what we can do,” McCaskill said. “And like I said before, we’ve come from places where this isn’t the hardest thing that we have to go through. Saturday’s gonna be a piece of cake, retirement cake.”

“Cecilia brought it up [after] the last fight,” McCaskill said. “Those aren’t my words. Those are hers. And I’m just gonna make her eat ‘em.”

A confident Braekhus is certain she won’t retire after her second fight against McCaskill.

“Listen, I will win, so it’s not even an option,” Braekhus said. “And I have a bigger name than her anyways, with or without the belts.”