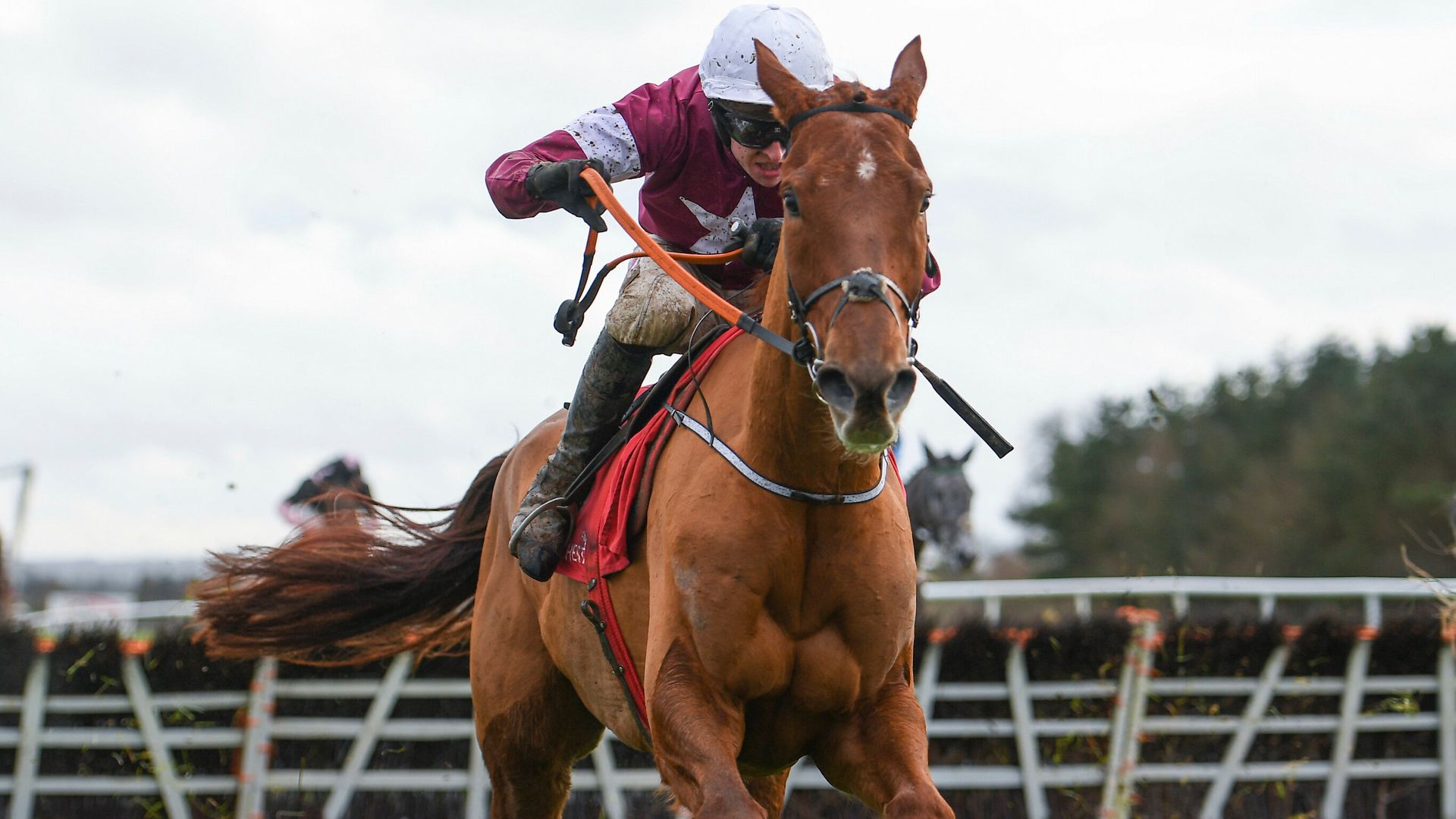 There are nine handicaps at the Cheltenham Festival this year – and Sky Sports Racing’s senior analyst Jamie Lynch has a shortlist of horses to keep an eye on.

One of the more interesting trends around the Grand Annual is that six of the last seven winners hadn’t won previously that season, suggesting that plans can and often do pay off in the race: and there looks a plan in place with Embittered.

He finished a fine third in last year’s County Hurdle, after a novice hurdling campaign that took in two Grade 1s, and he’d followed the same flight path as a novice chaser, fourth the last twice in Grade 1s, though just about the last off the bridle bar Energumene in the Irish Arkle.

The Grand Annual will be his handicap debut, and a mark of 146 – just 1lb higher than in the 2020 County Hurdle – looks well within his means.

Alex Hales is well on his way to his best seasonal total, with the development of horses like For Pleasure and Millers Bank showcasing his skill. It was also some training feat to get Huntsman Son ready to roll after a 538-day absence at Wetherby in October, when beating Two For Gold.

He reminded of his fragility when pulled up next time in the Caspian Caviar Gold Cup, but not before he made a big move into contention, and he has since been refreshed, while given entries for the Plate and the Grand Annual, a lively longshot for either on his Wetherby form, off a revised mark of 147.

He got competitive in the Close Brothers at the 2019 Festival (won by A Plus Tard).

Novices have won three of the last seven editions of the Ultima, and what each had in common was that they were notably good jumpers for novices, which is the key selling point with Lieutenant Rocco.

He was too immature for last year’s Albert Bartlett, pulling up, but he has put it all together over fences upon joining Nick Mitchell for this season, impressing in particular with his jumping, keeping good company prior to running riot in a more run-of-the-mill novice at Ffos Las last time, by eight lengths from the solid Nestor Park.

He’s in the Brown Advisory (RSA) and the Marsh, but it’s the Ultima I’m hoping he goes for, as he’ll stand out from the crowd in that, off a mark of 147.

Numbers and letters of 114P15P3. Those are the form figures for Mister Whitaker at Cheltenham, all the more notable that a ‘1’ and a ‘3’ came at the Festival itself, winning the Close Brothers in 2018 and beaten three lengths by Simply The Betts in last year’s Plate (off 152).

He seems to have been around for ages, yet he’s only nine, and his season has logically been built around returning once again to Cheltenham in the best shape – and off the best mark – possible.

He has been minded, raced just twice this term, but hinted that all of his ability was intact when sixth at Warwick in February, and he comes into the race 2lb lower than last year.

He’ll suffer from the scrapping of the novice handicap chase at Cheltenham in the sense of plenty of potential-packed novices will be coming his way, but if you like your ‘Festival Form’ then you’ll like Mister Whitaker.

Different name, same stable. That’s the only reasonable approach to take with the Gordon Elliott yard, a yard that has won the Boodles in two of the last three years, and a yard that looks to have trained Riviere D’Etel with this race in mind.

After transfer from France, she strung out the boys in a juvenile maiden hurdle at Punchestown, in a time that compared very favourably with the handicap hurdle over the same distance on that card.

On her Punchestown win alone, the handicapper could have been harsher than 134.

The market tells you pretty much everything you need to know about Run Wild Fred, principally for the Kim Muir, but he may go off very short indeed for a handicapper.

Much is made every year of the handicap marks given to Irish horses and their relative harshness (or not as it usually plays out), but Run Wild Fred looks to have got in very lightly off 140, which is just 4lb higher than in the Thyestes Chase when he beat all bar stablemate Coko Beach, who subsequently won a Grade 2 at Navan.

He has done most of his winning on heavy ground, but it was good to soft when he would have finished second in a novice hurdle at Thurles last winter, and the winner that day was Monkfish!

Every handicap shortlist needs a left-field longshot, and Saint Sonnet fits the bill for me. There’s a good reason he’s completely off the radar, because his form figures this season are FPP, all before Christmas, but he’s exactly the type who Paul Nicholls could turn around in time for Cheltenham.

He went off just 6/1 for the Paddy Power Gold Cup on his reappearance, due to how well he ran (given his immaturity) at last year’s Festival when seventh behind Samcro and co in the Marsh, hot on their heels turning for home.

He’s in the Plate but also the Coral Cup and Martin Pipe, suggesting that hurdling may be on the agenda, and it’s worth remembering he was a Listed winner in France in that discipline before joining Nicholls.

His mark (under both codes) of 143 is 4lb lower than when he was amongst the favourites for the Paddy Power.

From a mark of 137, it’s touch and go whether Sully D’Oc will make the cut for either of his entries (Plate and Grand Annual), but there may be a little more slack this year for one obvious reason or another, and there are several positive pointers about him.

First is his age, only seven, in conjunction with the fact he has raised his game in just two starts this season, after taking some time to acclimatise for Anthony Honeyball following his French transfer. A wind op seemed to make a difference as he won easily on his reappearance at Ascot from Editeur Du Gite and Smarty Wild (who have both won handicaps since), and he looked all set to follow up at Newbury (2½m) until running out of steam after blundering at the last (when in front).

We still haven’t seen the best of him, also coming here fresh, which seemingly suits him, and he’d be an especially interesting each-way play in the Grand Annual, as a strongly-run 2m may be just what he wants.

Not that it’s the only way into the race, but recent history tells us that there are two trainers to focus on when it comes to the County Hurdle: Willie Mullins has landed it five times since 2010, and Dan Skelton has remarkably won three of the last five editions.

Third Time Lucki has a Supreme entry, but it’s the County Hurdle that promises to be right up his street, no coincidence that his handicap debut has been saved for such a race.

A mark of 143 counts for some, but probably not all, of that projection, of what he may do in the handicap environment. He was only three-and-a-half lengths off Appreciate It when fourth in last year’s Champion Bumper, and he’d been impressing over hurdles prior to last time at Musselburgh, when undone by a steady pace, long before he made a mess of the last.

The end-to-end gallop of a County Hurdle would certainly plug into his powers, and his potential.

You Raised Me Up

He’s not your normal 8yo, because he’s had just six starts over hurdles, and only one in a handicap, which came in last year’s €150,000 Ladbrokes Hurdle at the Dublin Racing Festival when he was a close third in a field of 22.

Since then, with eyes on another big prize, he has been looked after, contesting just two novice hurdles, winning both, warming up perfectly for Cheltenham by taking care of favourite Petibonome at Naas in February.

His mark (141) is very different now from his only previous handicap, but it needn’t be beyond him, considering his profile, and he’d be more interesting in the Coral Cup than the County Hurdle, as he’s virtually an open book over 2½m+.

Follow all four days of the Cheltenham Festival 2021 on Sky Sports’ digital platforms with updates and analysis on Sky Sports Racing.