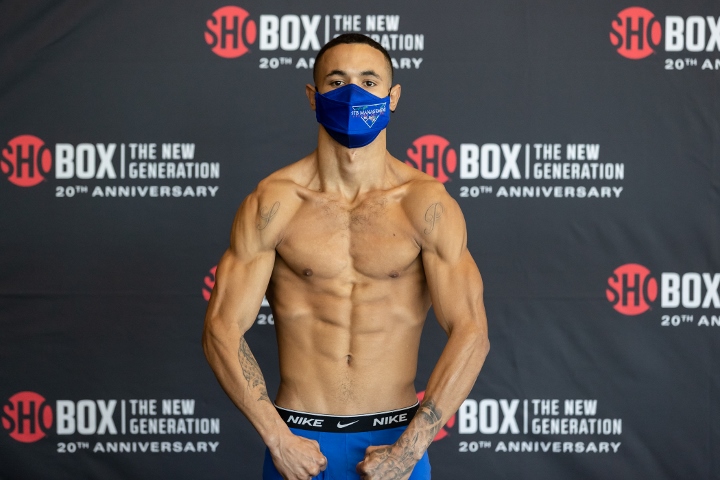 Victor Padilla overcame the worst start of his pro career to register his best win to date.

The unbeaten Puerto Rican southpaw from Berlin, New Jersey recovered from a 1st round knockdown to drop and stop Thomas Velasquez in the 5th round of their lightweight bout. Padilla dropped Velasquez en route to a subsequent stoppage at 1:56 of round five in their Showtime-televised opener Wednesday evening at Mohegan Sun Arena in Uncasville, Connecticut.

Padilla controlled the action in the opening round, only for it all to slip away courtesy of a knockdown midway through the frame. An exchange on the inside saw Padilla attempt to score with a combo, only for Velasquez to counter with a right hand to the midsection. Padilla claimed the sequence to be the result of a slip, in part supported by replays but for the official ruling to stand and with Velasquez earning a 10-8 round after three minutes.

Rounds two and three offered little suggestion that Padilla was able to make up the difference, as there was little separation between the pair of unbeaten Philly natives. Velasquez continued to enjoy success with his counter right hand, while Padilla was able to score with his right hook in round three.

Padilla turned the tide in round four and never turned back. The 22-year old knockout artist was on the attack throughout the round, with Velasquez unable to keep up.

Velasquez found himself caught up in a fight when the plan was to box. Padilla never stopped throwing punches, rocking Velasquez midway through the round and sending him to the canvas courtesy of a left hook following a hailstorm of power shots. Velasquez barely made it to his feet, only to get caught with an ensuing volley to force the stoppage.

The bout served as the televised opener of a quadruple-header, headlined by Brandun Lee (21-0, 19KOs) in a scheduled 10-round junior welterweight bout versus Samuel Teah (17-3-1, 7KOs).