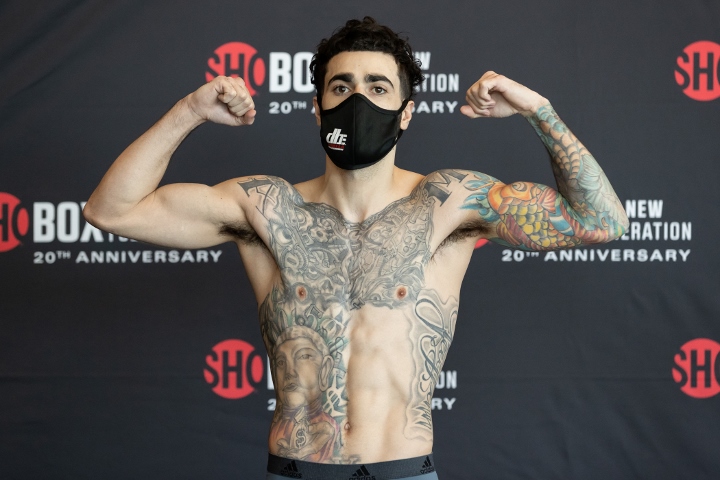 Steven Ortiz settled for a late replacement in preserving his perfect ring record.

Judge John McKaie had the bout 79-73, while judges Don Trella and Tom Carusone each scored it 77-75 in favor of Ortiz in the Showtime-televised battle of unbeaten lightweights.

Hill accepted the fight on three weeks’ notice, replacing Damon Allen who was forced to withdraw from the all-Philly battle after suffering an injury during training camp.

Ortiz outboxed Hill in the opening round, working his jab and scoring with the occasional right hook. Hill stood his ground in the pocket, connecting with right hands but leaving himself open to counter shots as he failed to establish his own jab.

The same pattern held true in round two, though with Hill beginning to close the gap. Ortiz was still in control, putting his superior boxing skills to good use. Hill enjoyed his best sequence of the fight late in round three, landing a pair of straight right hands while Ortiz was against the ropes.

Ortiz continued to outbox Hill in round four, though the narrative would change in the second half. Hill grew increasingly aggressive in rounds five and six, managing to get Ortiz to fight more than box over that stretch.

Hill was caught by separate fouls in round six, along with some clean punches. Ortiz connected with a right hand, followed by a headbutt which caught Hill on his left eye. Things would get worse by round’s end, as Ortiz landed a beltline shot well after the bell which forced Hill to drop to his knees.

Ortiz righted the ship in the final two rounds to preserve the win, though not before catching a tongue-lashing from head trainer Raul ‘Chino’ Rivas prior to the start of the eighth and final round. The urging from Rivas called for Ortiz to use his jab more and box on the outside.

The bout served on the televised undercard of a quadruple-header, headlined by Brandun Lee (21-0, 19KOs) in a scheduled 10-round junior welterweight bout versus Samuel Teah (17-3-1, 7KOs).