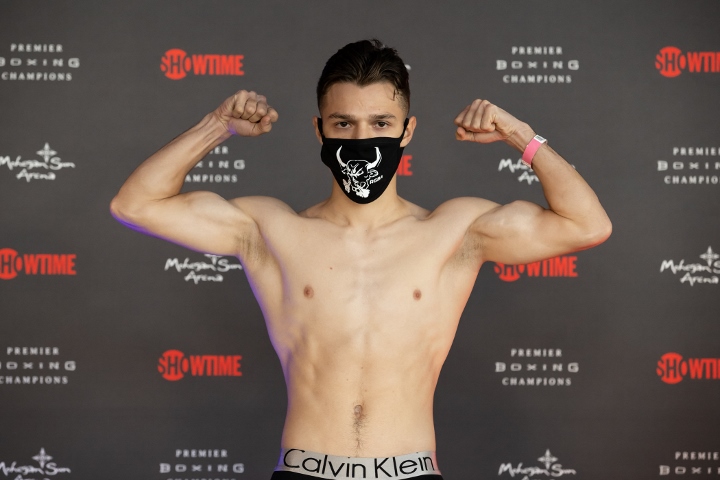 David Navarro was less than a minute away from lodging his third consecutive victory in as many fights until disaster struck for the former amateur standout.

An untimely cut produced the first loss in the career of Los Angeles’ Navarro, who suffered a 6th round injury stoppage at the hands of Guadalajara’s Diuhl Olguin. Navarro was ahead 50-45, 50-45 and 49-46 on the official scorecards when a cut suffered earlier in the fight opened up to the point of not being allowed to continue. Less than a minute remained at the time of the stoppage in the 6th and final round of their non-televised featherweight fight Wednesday evening at Mohegan Sun Arena in Uncasville, Connecticut.

Navarro entered his third fight since turning pro last October. All three career bouts have come on undercards preceding a live Showtime telecast, though it remains to be seen if Wednesday’s fight will make the telecast given the outcome. Still, the 21-year old appeared to be doing well, despite having been extended past the 1st round for the first time as a pro.

An exchange at close quarters left Navarro with a cut which—according to limited footage obtained by BoxingScene.com—appeared to be the result of an elbow. Navarro fought through the wound and the blood which followed, only for the cut to worsen Less than a minute remained in the bout when time was called to examine, only for the ringside physician to decide that Navarro was unfit to continue.

There is speculation that ringside officials were under the impression of the bout being scheduled for eight rounds rather than six, although BoxingScene.com has been unable to verify such details as this goes to publish.

For now, it goes down as a significant upset.

Navarro was a 15-time National amateur titlist and a 2020 U.S. Olympic hopeful before opting to turn pro under the Split-T Management banner, with his career guided by manager Tim VanNewhouse. As a pro, he is now 2-1 (2KOs) though undoubtedly eager to avenge the loss whenever a rematch can be scheduled.

Also on the non-televised undercard, Atlanta’s Brian Norman Jr. improved to 19-0 (16KOs) with a 5th round knockout of Benjamin Whitaker (15-5, 3KOs). Time of the stoppage was 1:56 of round five.